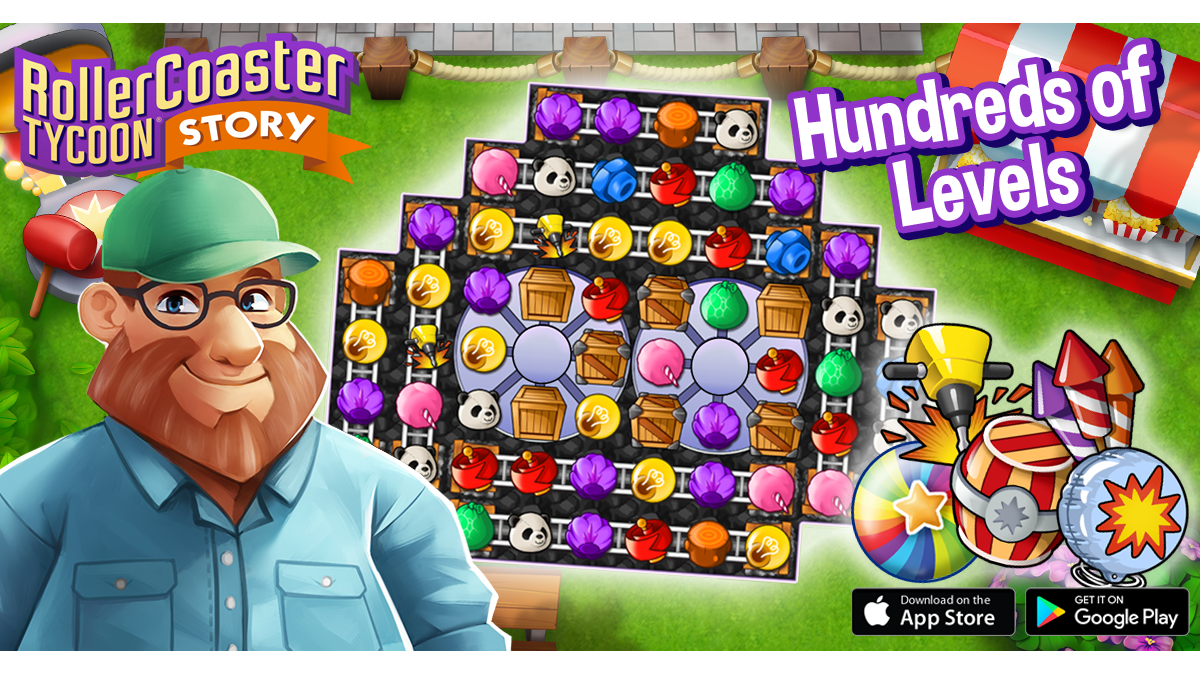 RollerCoaster Tycoon Story is the latest game in Atari’s RollerCoaster Tycoon franchise. The free-to-play mobile game challenges players to complete match-three puzzle levels to earn tickets that can be used to renovate and customize an abandoned amusement park.

Instead of swapping the locations of touching symbols to make matches, you’ll need to drag whole columns up and down, move rows left and right, and more to create groups of three or more matching symbols that touch in some way. For instance, symbols can touch in a straight line, a square, or an L shape. You just can’t connect symbols diagonally.

The game’s symbols are placed on top of ride tracks, which dictate how they can be moved. As an example, if a track runs vertically, symbols on that tack can only be moved up or down. If a track has a curve in it, you’ll be able to move its symbols along the curve, and so on.

Each stage challenges you to complete one or more goals before running out of moves. For instance, one stage may ask you to collect the required number of a specific symbol by using it in matches, while another may ask you to clear grass patches from the board by making matches on top of them.

As you create matches with four or more symbols, special power-ups will appear on the board that can help you complete stages. You can also purchase additional power-ups using coins, the game’s currency. While you receive some coins for free while playing, you can purchase more instantly with real money.

When you complete a stage, you’ll earn a ticket. These tickets can be used on their own or in bulk to complete tasks around the amusement park, such as cleaning up trash or installing lamp posts. Some tasks give you the chance to customize the park’s appearance to suit your tastes. For instance, you’re able to choose from three color options when painting the park’s ticket booth.

In addition, some special building options must be “researched” using coins before they’re allowed to be built. Research takes time, but the more coins you invest into the research project, the faster the research will be completed.

RollerCoaster Tycoon Story is available to download for free on iOS and Android devices. The game is rated 4+ on iOS and E for Everyone on Android.

Even though RollerCoaster Tycoon Story is family-friendly, in our experience, this style of match-three game is more difficult to wrap your head around than a traditional match-three game (such as Candy Crush Saga). This may make it more challenging for both kids and older players to make progress.

Check out the first 12 minutes of RollerCoaster Tycoon Story in our SuperParent First Look below to see how this one plays.