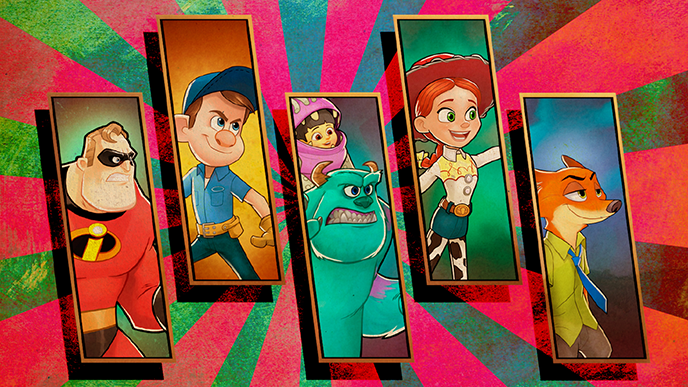 The Disney juggernaut continues to churn out entertainment to enchant the masses. The latest is a new mobile game -- Disney Heroes Battle Mode. This strategic brawler will draw in fans of all ages with familiar faces from more modern Disney/Pixar fare -- The Incredibles, Wreck-It Ralph, and Zootopia -- then keep them around with a slick presentation and accessible gameplay. It's entertaining in small doses, if you’re willing to look past the pay-to-win aspects of the game.

Disney Heroes Battle Mode is a strategic brawling game in which you have a squad of familiar Disney characters that go head to head against waves of enemies that get progressively more challenging as you advance. To win battles, you’ll need to strategically level up your characters by battling and collecting or crafting special hero badges, which can be assigned to different characters to boost their battle stats.

That’s where the strategy element of this game comes in. Players decide which members of their team will level up and which will get left behind. As you play the game, you’ll collect more heroes with different powers, and will be able to swap them in and out at the beginning of a round, depending on which skills will make the quickest work of enemies.

So there’s battling in this game?

Yes, this game revolves completely around battling, levelling up, and going to battle again, but the action is completely cartoon-y and gore free. This is a Disney game, after all.

Battling takes place in a story-driven campaign mode, where your crew battles against random enemies and corrupted heroes in order to free their virtual city from corrupt code. There’s also an arena mode where you can pit your team of heroes against other teams controlled by people around the world.

The actual battling in the game is a mostly passive experience. When your team confronts enemies, you watch the action unfold while occasionally tapping characters to activate their special powers when they’re ready. If your kid is an action-packed adrenaline junkie, this might seem quite boring. Kids who are OK with a more laid-back game experience that involves some strategic thinking will find this more satisfying. It’d be great if at some point the game would give you more control over how the action plays out -- which enemies to attack first, placement of your crew, etc.

When you want to mix up the action, you can hop into the Arena mode, and put your posse head to head against other players’ crews. Arena matches are generally challenging, especially as you are just getting started in the game, which means it can be a bit of a slow grind to level up your arena stats. Also, you can only battle a few times before hitting what I like to call the “Wait Wall,” where you have a wait a certain amount of time before engaging in another Arena battle (unless you want to pay up).

Is this game good for families?

Like my son said when he watched me play this game, “I know all of those characters!” The character recognition alone is where a game like this will bring in players in droves. The action portions of the game are tame, and I’d be comfortable showing this to kids of all ages.

Anything else parents should know about this game?

As this is a free-to-play game, you can download it for free, but you will be faced with a constant upsell to buy virtual items to help you play longer or level up faster. Power players will find this upsell annoying, but gamers who like to ‘snack’ on games for 30 minutes at a time will have plenty to do before they hit any Wait Walls. Parents, just be sure your mobile app account requires a password to use your credit card.

The other watch-out in this game is the in-game chat system. Players can freely chat with other players, and in the short amount of time we chatted, we saw some not-so-friendly and one censored, but still undesirable comments like “suck my wiggling [censored]." Sure, it was censored, but you still got the gist. You can turn off chat in the game, but there’s nothing stopping kids from going back in and turning it on as soon as you’re out of the room.

OK, so is Disney Battle Heroes a Try or Bye?

If you have a die-hard Disney fan in the house, we say definitely give this game a TRY. Kids will love seeing their favorite movie characters mixing it up together on screen, and it’s a game that is accessible to all ages of kids, as long as they’re into a more thoughtful, slow-paced strategy battle game. Watch out for the monitored-but-meh in-game chat and set ground rules in advance on what you will or will not spend for in-game extras.