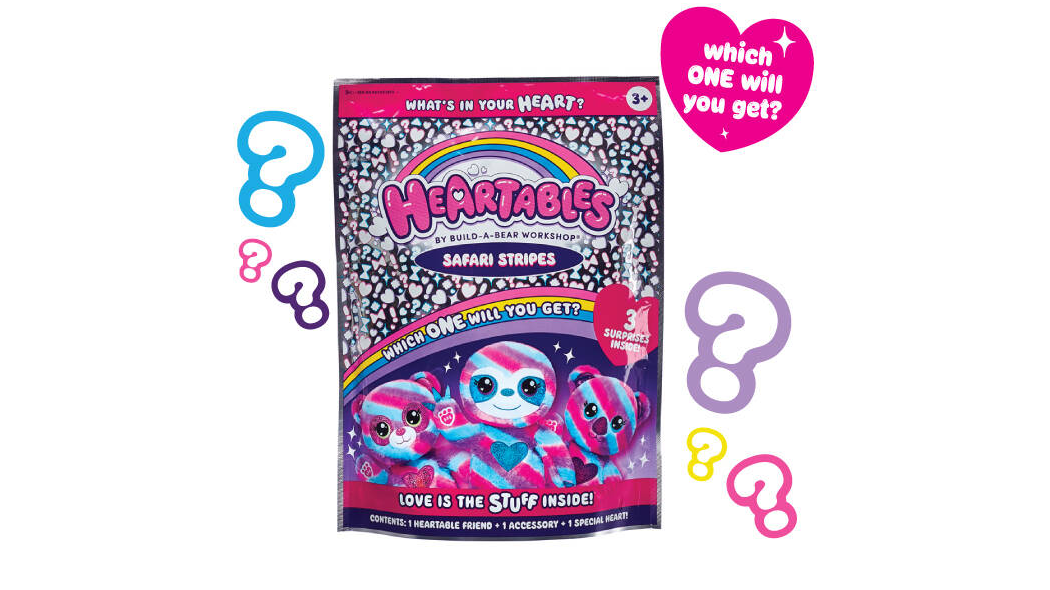 Build-A-Bear Workshop launched a new line of mystery stuffed animals called Heartables. Similar to products like LOL Surprise Dolls and Mattel’s new Cloudees, these Heartables are “blind bags” (or “surprise packs,” as they may also be called), meaning you won’t know which critter you’ll get before you open the package.

Heartables are currently available in two different themes, or series: Unicorn Land and Safari Stripes. Each series only has three animals to collect, so there’s a good chance littles will receive the one they want on their first try (that is, if they would prefer one over the others). Keep in mind, though, that you may also wind up with duplicates if you're determined to find a specific critter, as is the case with other blind bag toys.

The Safari Stripes series also has three critters up for grabs, with all three having blue, pink, and purple striped fur:

Each animal in the Unicorn Land series is 17 inches tall, while the Safari Stripes creatures are slightly shorter, at 16 inches.

A single Heartables can be purchased online and in Build-A-Bear stores for $19. Each package contains the shell of a single animal, a bow accessory, and a heart that can be placed inside the critter when you fill it. If you order a Heartables online, you’ll need to take the animal into an actual Build-A-Bear store to complete the stuffing process and bring the critter to life.

What do you think of these new Heartables stuffed animals? Let us know in the comments, or tweet us @superparenthq.