Game News Roundup: Pokemon Are Taking Over the Nintendo Switch 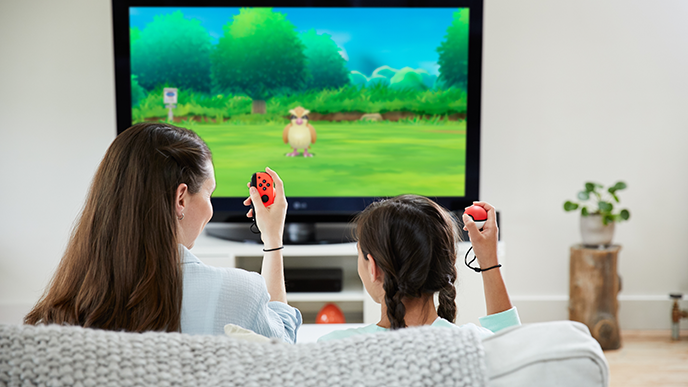 Here’s what’s happening in video games, from the Switch getting multiple Pokemon games to a new Lego game based on DC comics villains.

Pokemon fans will soon be able to explore the Pokemon universe in an exciting new way. Pokemon: Let’s Go, Pikachu! and Pokemon: Let’s Go, Eevee! are coming to Switch on November 16. They’ll let kids team up with either Pikachu or Eevee (depending on the game they choose) and explore a world inspired by Pokemon Yellow, which was released on Game Boy in 1999. Remember, parents, with these sorts of Pokemon games, it’s not necessary to purchase both games, as the general gameplay is the same in both.

The two new games will allow players to capture Pokemon by swinging the Switch’s Joy-Con controllers, and play together with friends and family in a two-player mode. Pokemon Go players will also be able to get in on the fun by transferring certain Pokemon from Pokemon Go into the new Switch games.

The Poke Ball Plus will also be released on November 16. This new controller is shaped like a Poke Ball, and it can be used instead of a Joy-Con to play Pokemon: Let’s Go, Pikachu! and Let’s Go, Eevee! Pokemon Go players will also be able to use it instead of the Pokemon Go Plus accessory (if they own one). Players can transfer a Pokemon from Let’s Go, Pikachu! or Let’s Go, Eevee! into the Poke Ball Plus and take it with them when they’re not playing the game. They’ll receive rewards once they return the Pokemon back to the Switch game.

Pokemon Quest is Out Now -- and Free to Play -- on Switch

Kids (and parents) who can’t wait for Pokemon: Let’s Go, Pikachu! and Let’s Go, Eevee! to launch this November can embark on a new adventure in the Pokemon universe right now in Pokemon Quest. The free-to-play Switch game takes players to Tumblecube Island, where everything is shaped like a cube (including Pokemon).

Players are asked to explore the island to collect treasures, and they’ll be able to battle and befriend wild Pokemon along the way. While kids can start by choosing their first Pokemon companion from the group of Pikachu, Eevee, Bulbasaur, Charmander, and Squirtle, they’ll be able to recruit additional creatures by cooking dishes back at their base camp that certain Pokemon will enjoy.

Pokemon Quest is free-to-play, but it comes with optional in-app purchases that can speed up progress. Parents, don’t be surprised if your kiddos ask you for money in this one.

Pokemon Quest will launch on iOS and Android in late June.

The DC comics universe has already received the Lego treatment through a series of Lego Batman video games and real-world building kits. Now, a new Lego game will put a twist on the established formula, letting kids (and adults) become DC super-villains, rather than super heroes. Lego DC Super-Villains will feature a brand-new “villain-centric” storyline, including popular locations and characters from the DC universe. Kids will be able to create their own Super-Villain, who becomes the star of the story.

In the game, the Justice League has vanished, and a new group, called the Justice Syndicate, has taken over the task of protecting Earth. DC’s popular Super-Villains discover the Justice Syndicate’s “heroes” may not be who they say they are, and they’ll need to team up to stop whatever they have planned. Like other Lego video games, this one will allow kids and parents to play together via local, two-player multiplayer.

Lego DC Super-Villains will launch on PlayStation 4, Xbox One, Switch, and PC on October 16, 2018.

Goosebumps HorrorTown is the Latest Mobile Game Based on the Works of R.L. Stine

A new city-building game based on R.L. Stine’s Goosebumps is now available to download for free on iOS and Android. Goosebumps HorrorTown let’s players build houses and other buildings in order to fill the town with residents. Users can complete quests by assigning residents to timed tasks. By expanding the town and completing quests, players unlock a variety of monsters, beginning with an ancient mummy, that they can set loose on the town to scare the humans and earn valuable rewards.

Parents, if you read Goosebumps books when you were younger, this is a great chance to share that experience with your kids in a new way. The game comes with optional in-app-purchases, though, so make sure you turn off in-app purchases on your device before letting your kids loose in this eerie town.