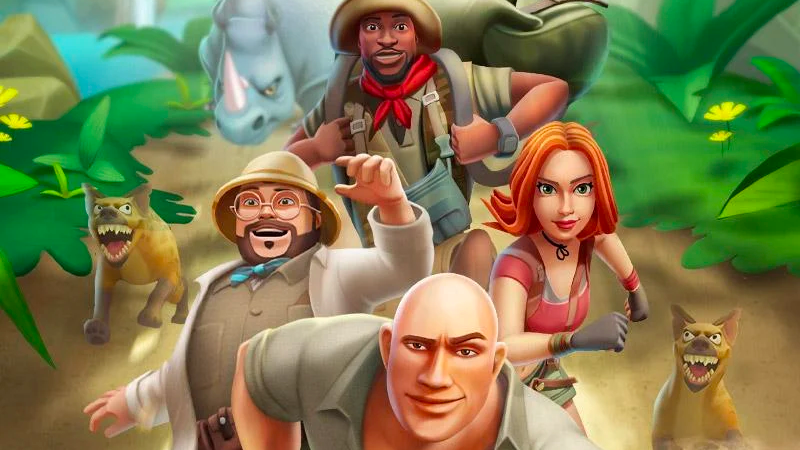 Jumanji: Epic Run is an endless runner on iOS and Android devices, which is inspired by the recent Jumanji films. (Jumanji: The Next Level debuted in theaters on December 13, 2019.)

In Jumanji: Epic Run, the Falcon Jewel has been stolen, and you’ll need to help Dr. Smolder Bravestone and his companions retrieve it. In each game, you’re challenged to run after the jewel thief for as long as you can until you eventually fail by running into an obstacle, enemy, etc.

Your character will run forward automatically, leaving you to swipe left and right to move between three running lanes, or swipe up and down to jump over or slide under obstacles, respectively. As you run, you’ll come across a variety of animal and human enemies in the path, and you can either avoid them by switching lanes or attack them in a number of ways. For instance, you can slide into an enemy to knock them out of your way.

You can also collect items as you run, such as gold bars, which serve as the game’s free currency, and power-ups like shields and gold bar magnets, among others.

In between games, you can use the gold bars and items you’ve collected to upgrade your character(s) and power-ups, which can help you run longer in future games.

While you start with only Dr. Smolder Bravestone available as a playable character, you can unlock his companions (as well as additional gameplay environments) as you progress.

Finally, you can complete quests while running by doing things such as collecting the required number of gold bars or collecting a specific power-up. As you complete quests in bulk, you’ll unlock treasure chests that contain extra in-game goodies. Chests take time to open, but you can speed up the timer by watching a video ad or spending premium currency (real money). This isn’t the only way you can spend real money in the game.

Jumanji: Epic Run is available to download for free on iOS and Android devices. The game is rated 12+ on iOS and E10+ for Everyone 10+ on Android.

Check out 10 minutes of Jumanji: Epic Run gameplay in our SuperParent First Look video below.