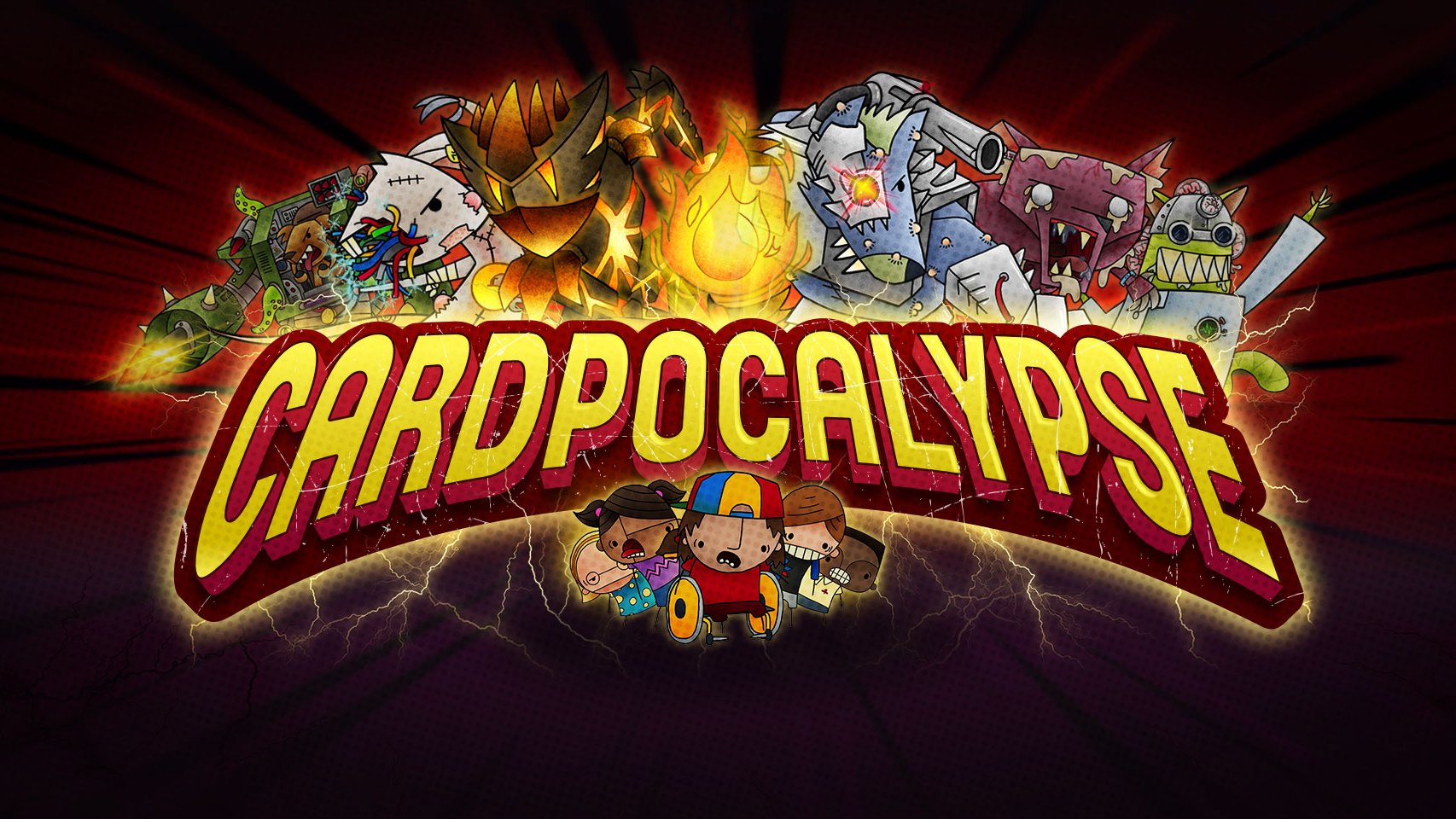 The heavy guitar riff rips. A catchy, fist-pumping theme song screams about collecting cards, battling creatures, and defending the world. Welcome to the introduction screen of Cardpocalypse. (Wait. What video game based on trading card games did you think we were talking about? Pokemon?)

If this is the first you’re hearing of Cardpocalypse, let’s quickly break down one incredibly meta videogame: It’s a collectible card game nestled inside a role-playing game…where the point of the RPG is that you’re playing a collectible card game. And you’re 10. Follow all that? It is also one helluva time machine for children of the 1990s that now have kids of their own. So with that in mind, I recruited my own card-game crazed child to play a bit of Cardpocalypse with me.

The adventure opens as our hero, Jess Carter, shows up for her first day at a new school – Dudsdale Elementary in 199x. Like all kids, there’s figuring out how to fit in and all the playground politics. You’re making new friends and, of course, there’s the new card game on everyone’s mind – Mega Mutant Power Pets (MMPP). The kids can’t stop talking about it. The adults are banning it from school. And all you want to do is play with your pals.

One thing you’ll notice up front is that the dialogue is just fun. It’s clearly aimed at parents that lived through the early Pokémon years. Cardpocalypse comes loaded with insider wink-and-nod jokes and visual cues to people that grew up in the 1990s, but it also sounds like someone truly channeled how kids talk. Sure, some of the slang changes over time, but how they talk in the game is awfully close to what you’d hear on a playground. One big complement here is that my kid and I both got a kick, playing the adventure portion together. Think like when you watch an animated movie together, but take away different levels of appreciation. Same here.

One of the things that stood out – especially with my child – is that this is technically his first taste of a role-playing game. In fact, Cardpocalypse’s approachable story and great hand-drawn art style got me having conversations about life in the school yard with my child.

Kids are mean to Jess in the library and my child is a little bothered by that. We talk about something similar that happened to him and how he dealt with it. In game, Jess gets confronted by a bully in the playground and he must pick Jess’ next words wisely – after all, a part of any good RPG are the dialogue choices.

“Dad, I would never call that bully a butthead like she did in the game.”

OK, we’re still working on that.

Playground insults notwithstanding, I was quick to use the game as a fun learning moment to illustrate the consequences of your actions. What happens if you treat someone with kindness versus being a wise-ass? It all gets laid out before you in Cardpocalypse. Potential rivals become friends. You help find creative ways to win people over and play with. Or you can see what happens when you push back on the wrong person and create an enemy.

Mind you, we’re just talking about the early parts of the game where everything still seems relatively normal. The further you get into the game, the more bonkers the plot. Eventually the Mega Mutant Power Pets card game (and cartoon show) start bleeding into the “real world” as the creatures appear around the school. Then it really does become a quest to save the world. Or, at least, Dudsdale Elementary.

A FULL CARD GAME INSIDE YOUR ADVENTURE

You figure out strategies, collect cards, and try to build a killer deck. The more battles you win, the more cards that get added to your arsenal. Everything one would do in the real world card games get replicated in Cardpocalypse. The difference is that this is all happening while playing the part of a grade-schooler.

If there’s one thing I’ve noticed about my child when he plays a game these days is that there are basic rules everyone learns. Then come the new rules that he keeps inventing as he plays. Anything to get the upper hand. New conditions. New reasons to count cards differently or change what they can do. You kinda have to laugh at it.

Even that aspect was poured into Cardpocalypse. The game slowly introduces you to the basic strategic concepts from the get-go. Over time, you use stickers to modify and rename the functions of the cards in your collection. It’s quite literally a function built into the game: Changing the rules of the card game to “cheat” and beat your opponents. It’s ingenious in its design and the fact that it’s something that kids sometimes actually do while playing IRL.

There’s a lot going on and certainly a bunch to process, but it’s a fun ride. Estimates peg Cardpocalypse taking in the neighborhood of 12 - to - 15 hours to go through the story. And that’s not counting the time my child decided to flex his insult-constructing creativity (“Hairy Banana Pants?”).

Cardpocalypse is now available on Apple Arcade, Android, and PC. It’s also coming to Nintendo Switch, PlayStation 4, and Xbox One on December 12.

Pokemon Go: How to Get a Straight to the Top, Machop Ticket