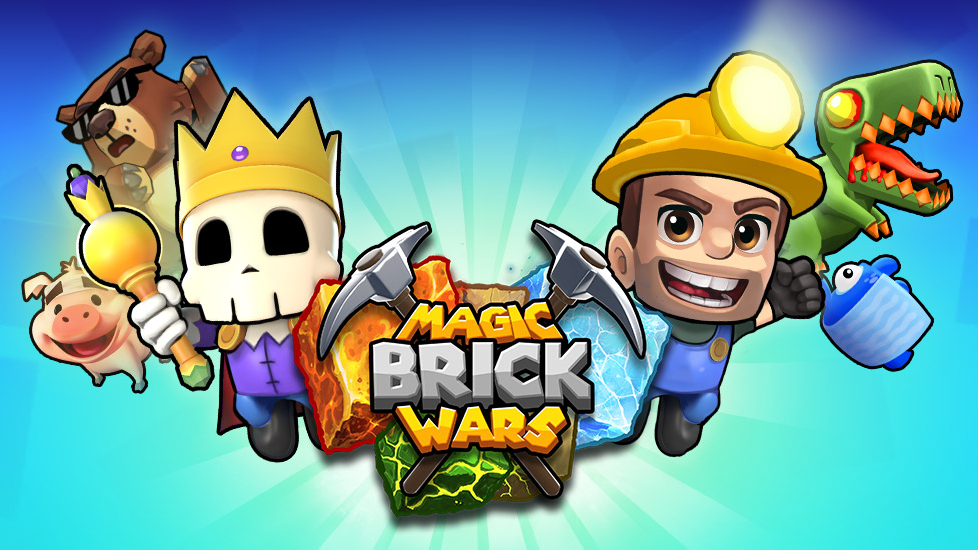 Magic Brick Wars is the latest mobile game from Halfbrick, the developer of the now classic games Fruit Ninja and Jetpack Joyride.

In Magic Brick Wars, you’ll take on other players in real-time multiplayer battles, with the goal being to destroy the opponent’s base before your own base can be destroyed. To do this, you’ll place bricks and units onto the battlefield to both defend your own base and attack the enemy.

Units will walk forward automatically, while blocks will stay where you put them, until they’re destroyed by one of your opponent’s units. Certain bricks, like the ice brick and fire brick (as examples), can freeze or burn enemies, respectively, rather than simply slowing them down like a normal brick.

Meanwhile, each unit has its own stats and strengths, so you’ll need to strategically deploy them at the right times and in the right places in an attempt to damage the enemy, or at least take out oncoming forces. You spend mana points to deploy units onto the battlefield, with different units requiring a different number of mana points to use. You have a limited amount of mana to work with at any one time, but it recharges automatically throughout each battle.

Similarly, each time you place bricks onto the field, you’ll need to wait a few seconds before you can place any more. This adds an extra element of strategy to the experience.

As you win matches, you’ll receive treasure chests containing in-game prizes, such as cards that can be used to upgrade your units and bricks to make them stronger. You can also collect new units and bricks over time. These chests take time to unlock, or you can skip the wait with premium currency (real money).

In addition to competing against other players, you can also try out the game’s Dungeon mode, which allows you to spend a limited amount of energy each day breaking blocks for a chance to receive in-game items, such as coins and cards for upgrading your units and bricks.

The game also includes a Guild feature, as well as the ability to add other players as friends. You can challenge your in-game friends to battles, if you want to take a break from competing against strangers.

Finally, you can spend premium currency (real money) on a Premium Pass, which gives you access to exclusive missions that you can complete to unlock a variety of in-game rewards.

Magic Brick Wars is available to download for free on iOS and Android devices. The game is rated 12+ on iOS and E for Everyone on Android. There is a noteworthy discrepancy between these two age ratings. That is, if a game has a 12+ age rating on iOS, we would expect the game to be rated, at the very least, E10+, if not T for teen on Android.

In our experience with Magic Brick Wars, we feel the 12+ age rating is more appropriate, due, in part, to the game’s heavy reliance on strategic thinking, which may put younger players at a disadvantage.

Check out a few minutes of Magic Brick Wars gameplay in our SuperParent First Look below to see the game in action.