Game News Roundup: This Company Wants to Help High-School Girls Get Into AI 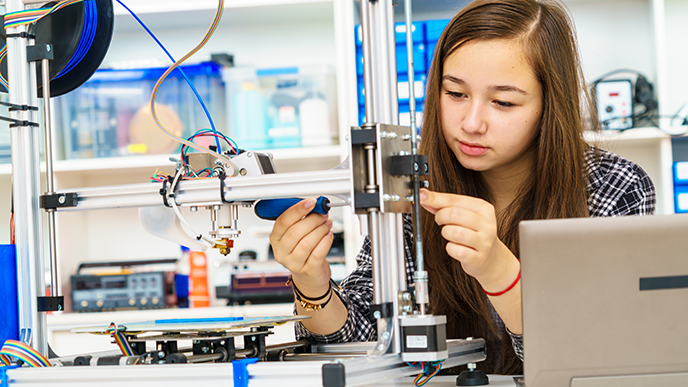 This Organization Wants to Help High-School Girls Get Into AI

An organization called AI4All hosts artificial-intelligence summer camps for high-schoolers, which introduce teenage girls, as well as students of color and those from low-income families, to AI development. The program provides opportunities for students whose schools may not have coding or programming classes, and allows them to explore career paths in AI.

In addition to teaching students about AI research and how artificial-intelligence can be used to affect society, the program allows them to get hands-on training through their own research projects. The Atlantic shared a few of the past student projects, including a “triage system for paramedics to respond to the most serious calls first,” and a “speech bot that detected and responded to abusive language.”

Parents, if your kids are interested in coding or artificial intelligence, you can learn more about the AI4All program on its website. If your kids are also into video games, check out our guide to learn how to help them create their own games.

Fortnite’s Getting a New Game Mode This Week

If it seems like your teens are constantly talking about something new in Fortnite, it’s for good reason. The multiplayer battle royale video game is updated pretty frequently, and another new update is coming this week. On May 25, Fortnite will receive a new game mode called Close Encounters, which will only be available to play for a limited time.

The mode will include only shotguns, which are most effective at close range, and jetpacks, which allow players to quickly get away from their pursuers. This will probably test your kids’ skills, as they’ll need to get close enough to other players to do some damage without letting them fly away.

The game’s “storm,” which spreads across the playing area, forcing players into closer proximity with one another, will also move faster in this mode, making each game last about 15 minutes (in regular gameplay, they can last longer). Fortnite’s combat is already intense and potentially aggravating, and this new game mode may only heighten those emotions. Make sure your kids know what proper online behavior looks like before letting them play this new mode.

Sea of Thieves is Getting a Major Update Next Week

Sea of Thieves, the swashbuckling pirate adventure game on Xbox One and PC, will receive a major content updated called The Hungering Deep on May 29. Sea of Thieves launched earlier this year, and it lets friends and strangers team up to complete missions, defeat enemies, and search for treasure while sailing the high seas.

Don’t worry -- the update is free. The Hungering Deep will let players complete a new story, based on finding out what happened to someone named “Merry” Merrick, who had two peg legs. Head’s up: This story content will only be available for a limited time, so check it out first.

This update will also include new cosmetic items for customizing your pirate’s appearance, a new drum instrument, and flags that can be flown on each ship. Weekly events will also start popping up in the game in the future.

The Hungering Deep update will also add a speaking trumpet to the game, letting users shout at other players. With more multiplayer features comes more opportunity to encounter negative behavior, so check out our guide to help your kids know how to react to any bad apples they come across.

To learn more about Sea of Thieves, take a look at our guide.

A New Teen Titans Mobile Game is Launching This Summer

A new mobile game based on the Cartoon Network show Teen Titans Go!, which follows young versions of DC superheroes on their adventures, is coming soon to iOS and Android devices.

The game is called Teen Titans Go Figure!, and it will let kids collect almost 100 DC Comics action figures, from Batman and Wonder Woman to Swamp Thing and The Flash. Players can take these figures into battles as they investigate who wants to put the Teeny Titans Figure Company out of business. The game will launch in time for the release of Teen Titans Go! To the Movies in theaters on July 27.

If your kids can’t wait for Teen Titans Go Figure! to release, the game’s predecessor, Teeny Titans, is available to download for $3.99 on iOS, Android, and Kindle devices. It offers pretty similar gameplay, with 77 collectible figures that can be taken into battles. Here’s a bonus: Those who have played Teeny Titans will receive a free Hooded Hood figure in Go Figure. If your kiddos beat the first game, they’ll receive an “extra surprise figure” in the new game as well.