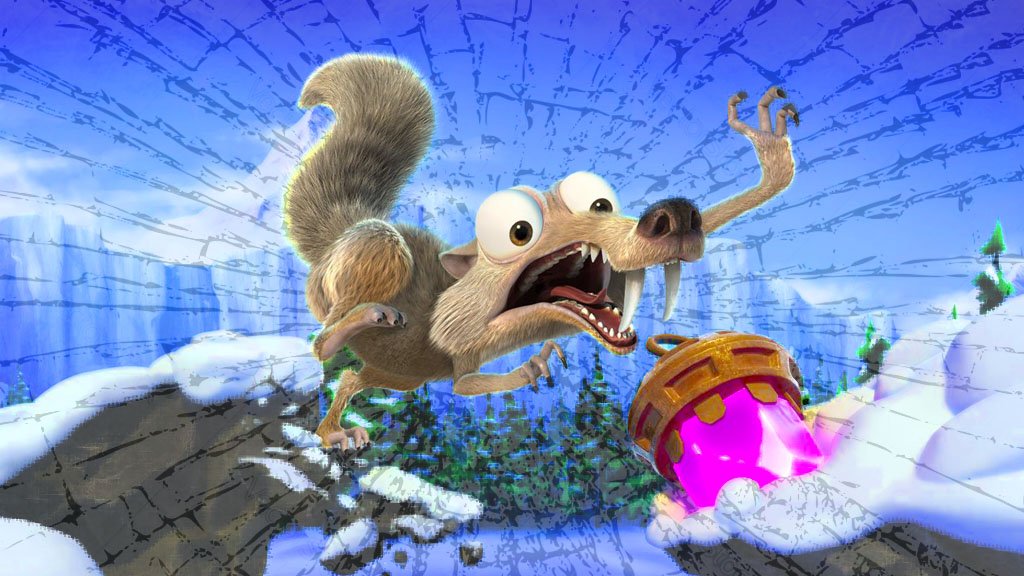 While the storylines and settings of the family-friendly Ice Age films may vary from one movie to the next, there are a few things that remain constant, one of which being Scrat’s love for his precious acorn.

In Ice Age: Scrat’s Nutty Adventure, it’s that acorn dedication that gets Scrat into trouble yet again, resulting in a fun little 3D action adventure game for both kids and adults to enjoy.

Ice Age: Scrat’s Nutty Adventure is a 3D platformer, similar in style to games like Spyro Reginited Trilogy and Yooka-Laylee.

Each of the four paths has a different setting and visual theme (like icy lake or tropical jungle), which adds variety to the kinds of obstacles and enemies you’ll encounter on your journey.

How is the game played?

The controls are straightforward, with the majority of the game focusing on using the left analog stick to move, the right stick to control the camera, and a face button to jump. When you encounter enemies (such as beetles and crabs), you can use a combination of buttons to perform kicks, jump kicks, and ground stomps until they’re defeated. You can also use the shoulder buttons to toss projectiles at enemies and objects that are far away, or are flying in the air.

While the game doesn’t have a traditional tutorial, reminders or prompts will frequently appear on the screen telling you which button to press to complete a particular action. However, since the game is meant to be enjoyed by players of all ages (it’s rated E for Everyone by the ESRB), we would have preferred a more traditional tutorial to ease younger players in.

On a similar note, the game lacks traditional voice acting, and instead presents the storyline through text windows. There’s very little story here, all things considered, but younger players may need help from someone older to understand what’s going on.

On Scrat’s journey, you’re guided through each environment by bright pink shards that are scattered along the path, or found in breakable boxes. As you collect shards in bulk, you’ll raise Scrat’s maximum health, until you’ve hit the limit.

Other interactive objects (like locked doors and moving platforms) are also highlighted in pink so they stand out from the natural environments and make it easy to know where to go next.

That being said, there are lots of locked rooms and “hidden” paths for you to discover if you want to do so. In these areas, you can find extra shards or even statues and broken tablet pieces, which serve as the game’s collectibles. Whether or not you take the time to grab these tablet pieces and statues is entirely up to you, but we love having something extra to do. (If you want to finish the game as quickly as possible, you can also skip collecting shards and even avoid many enemies by running past them.)

As you progress, you’ll come across some areas that are only accessible once you’ve collected one or more Crystal Nuts, since each time you return a Crystal Nut to the Forgotten Temple, you’ll unlock a new ability for Scrat. First, you’ll earn the ability to double jump, or jump twice before hitting the ground (this lets you jump higher and cross longer gaps). The second ability lets you “slingshot” Scrat through pink rings in the air and clear very large gaps in the path. The last gives Scrat the power of telekinesis, allowing him to move special blocks to clear the path or create the ability to reach higher places.

Since you won’t have telekinesis (for instance) at the very beginning of the game, you can return to areas you’ve previously cleared to access the areas (and collect items) that were previously impossible to reach.

Finally, the game features some light puzzle solving and three boss battles to complete (none of which are terribly challenging).

Does the game have any issues we should know about?

Scrat’s Nutty Adventure becomes more challenging as you progress and unlock new abilities for Scrat. Though, we doubt that some of this increased challenge was intentional. For one, with Scrat’s slingshot ability, it’s possible to overshoot your landing platform if Scrat isn’t positioned properly before taking off.

Meanwhile, the telekinesis ability only allows Scrat to pull blocks, rather than push them. This means you’ll be walking backwards toward the screen each time you move a block, so you can’t see where you’re going. At one point, we accidentally walked off of a platform to our doom because we couldn’t see the edge until it was too late. Even so, “dying” isn’t really an issue, since you’ll simply reset to the most recent checkpoint you reached in the path, and checkpoints are all over.

On a more technical level, there are moments of “lag” or slow down, particularly when lots of enemies are on screen at once, and the camera itself can get a bit wonky if you’re in tight quarters.

Finally, there’s a big problem with the ice, mud, and lava “slides” that quickly move Scrat from a higher platform to a lower one. Unless you approach the slide at the right angle, you can shoot off the side of the slide and “die,” forcing you to try again. Or, you may not have enough momentum to actually clear the bottom of the slide, so you have to force your way out by jumping.

Ice Age: Scrat’s Nutty Adventure does have issues, but (aside from perhaps the slides), they’re more nitpicks on our part than truly major problems, and they don’t take away from what is ultimately a pretty fun experience for both kids and adults.