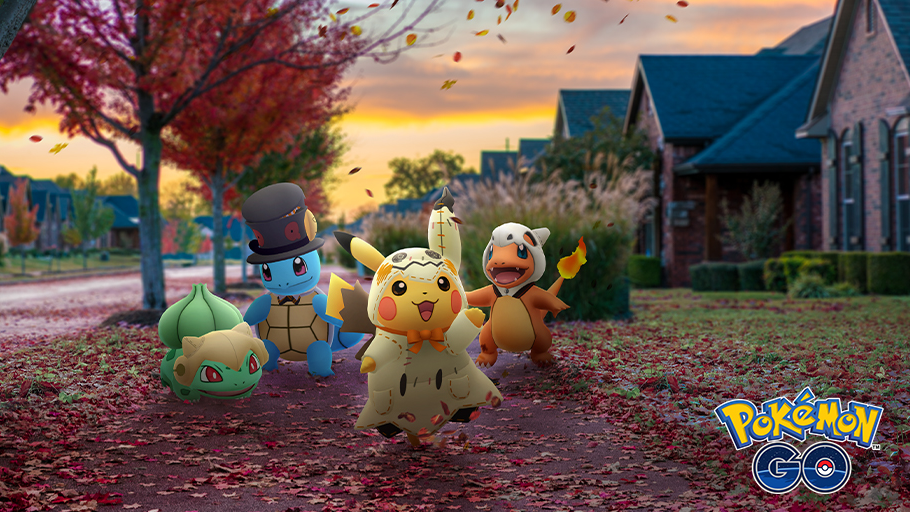 In addition, the following avatar items will be added to the in-game Style Shop at that time: a Zubat Bag, a Mimikyu Bag, a Pikachu Onesie, a Cubone Cap, and a Litwick Cap.

Finally, starting on October 17 at 1 p.m. PT, you’ll have the chance to encounter Yamask as you play, and this includes the chance to find its rare Shiny variant.

Next, the limited time Halloween event will run from October 17 at 1 p.m. PT until November 1 at 1 p.m. PT.

During this time, more Ghost- and Dark-type Pokemon than normal will appear in the wild, hatch from Eggs, and be available to battle in Raids. Darkrai will also make its first appearance in Pokemon Go as an opponent to take on in Tier 5 Raids.

Unlike previous Halloween events, which allowed players to catch Pikachu wearing a witch’s hat, this year will see multiple Pokemon in costume. We’ll be able to encounter Bulbasaur wearing Shedinja costumes, Charmander wearing Cubone costumes, and Squirtle wearing Yamask costumes as Raid bosses, while Pikachu wearing Mimikyu costumes will appear in the wild. You’ll even have the chance to encounter the rare Shiny versions of these four Pokemon.

Next, themed Field research tasks will be available to collect by visiting PokeStops during this event, and we’ll have the chance to complete Special Research starring Spiritomb, the Forbidden Pokemon. Spiritomb (and its associated research) was previously released in Pokemon Go, so we’ve reached out to Niantic, the game’s developer, to confirm whether or not we’ll have the chance to complete these quests a second time if we already finished them last year.

Finally, Halloween simply isn’t complete without candy, so throughout this spooky celebration, we’ll earn twice the normal amount of Pokemon Candy when we catch, hatch, and transfer Pokemon.