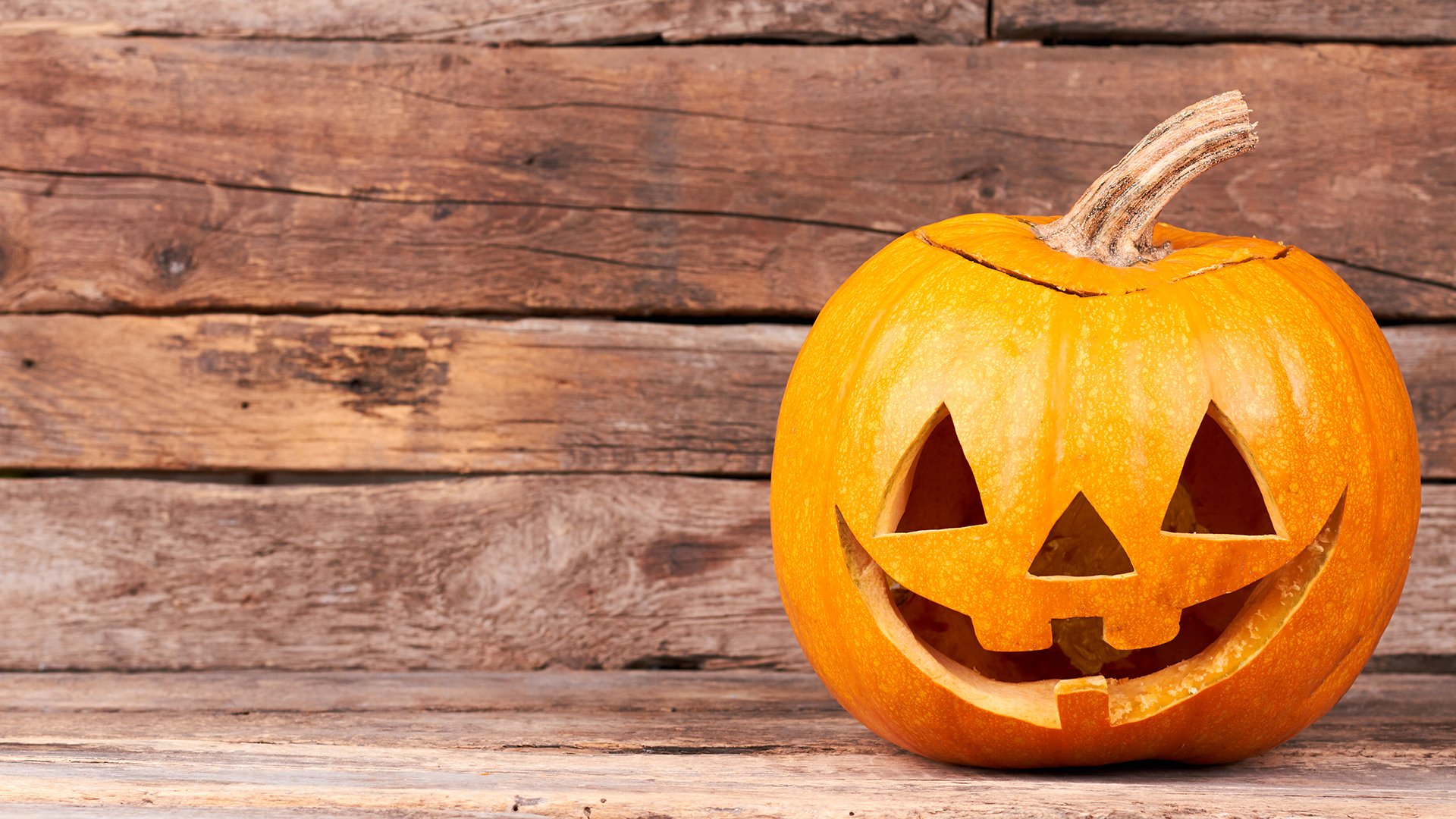 Halloween will be here before you know it, and while it’s easy to get into the spirit by watching a spooky movie or playing a creepy video game, what if you want to pull the family together around the table for something a bit more interactive?

These SuperParent-approved jigsaw puzzles and board games offer different Halloween-themed experiences for family members of all ages.

As the name suggests, Cobble Hill’s “Family” puzzles are designed to bring every member of the family to the table to share the experience. They feature pieces that come in three general sizes -- small, medium, and large -- so that both kids and adults have different sections to focus on (that is, the larger pieces are better for smaller hands to manage).

This 350-piece Halloween Cookies puzzle is a beautiful collage of eerily-decorated cookies, featuring tons of pumpkins, spiderwebs, haunted houses, and even a black cat. It measures 19.25” x 26.625” when it’s completed, so you’ll need a fairly large surface to do this one.

Based on the popular escape room trend, Ravensburger’s Escape puzzles combine traditional puzzles with a storyline and riddles, and challenge you to escape from the scene you’ve put together. In this case, the Witch’s Kitchen puzzle tasks you with escaping from a witch’s kitchen after eating a poisoned mushroom in the forest, while the Vampire’s Castle puzzle challenges you to get out of the vampire’s castle before it’s too late.

Each puzzle contains 759 pieces, and they’re recommended for puzzlers 12+. They’re deliberately challenging, with the image on the box varying slightly from the actual puzzle image that you’ll put together. Once the image is finished, you’ll need to look for and solve the riddles and brain teasers found in the image to figure out how to escape. A sealed envelope in each puzzle box contains the final solution, so feel free to take a peak if you get stuck!

All Hallow’s Eve Glow in the Dark Puzzle from MasterPieces

This 500-piece puzzle features lots of fun jack-o-lanterns in front of a spooky (haunted?) house. While the image contains many orange tones, which ups the challenge, the lower piece count should prevent it from being too frustrating. If you’re doing this puzzle with younger puzzlers, try encouraging them to look for pieces that stand out, like the bright green in the skull or the white / gray in the moon and stars. When the puzzle is finished, you can turn out the lights to see your masterpiece (no pun intended) glow in the dark!

Rather than being spooky and frightening, this adorable puzzle features a bunch of costumed puppers that are searching for treats in their little red wagon (which is appropriately decorated for the festivities). There’s a ghost, witch, and more, with lots of bright colors for kids to search for on the pieces. Plus, since this one only has 300 pieces, it’s less challenging than other puzzles in our roundup by default.

13 Dead End Drive was originally released in the early 1990s by Milton Bradley. In the game, Aunt Agatha has died, and her fortune is up for grabs. Your goal is to earn the rights to Aunt Agatha’s fortune by eliminating the other possible “heirs” using any means necessary. It’s a grim storyline on paper, but it’s a lighthearted bluffing game in practice.

What makes this one so fun, though, are the 3D pieces you place on top of the flat game board. These items, like a chandelier and statue, allow you to eliminate the other characters in ways that look like accidents. Of course, they can also be used against you, too.

Even though this is an older game, it has been re-released by Winning Moves Games, so it’s easy to find.

Invasion of the Cow Snatchers from ThinkFun
Age Rating: 6+

Invasion of the Cow Snatchers isn’t really a tabletop game in the way we typically think of them. There are no winners and no losers (except for maybe the poor cows getting abducted by aliens).

Instead, Invasion is part of ThinkFun’s line of logic games that challenge players with a set of 60 increasingly difficult puzzles rated “easy” through “genius.” The game consists of a deck of cards, a plastic tray, a number of different barrier pieces in a variety of heights, magnetic cows, cardboard crop circles, a clear lid, and a UFO to pick up the cow magnets.

Give your kids a taste of the spookums this Halloween with this slightly creepy, Mensa-approved single-player puzzle game. Invasion of the Cow Snatchers is available on Amazon.

Disclosure: ThinkFun provided SuperParent with a copy of Invasion of the Cow Snatchers for coverage purposes.

Arkham Horror features mature themes (mostly violence and psychological horror) and requires a great deal of reading. This is a great game to play with your teens who love tabletop games with rich story.

In Arkham Horror, players choose one of four scenarios, each of which puts our world on a collision course with supernatural terror. The new edition features exceptionally rich narrative, with player decisions (and luck) influencing the direction of the story.

Each player takes on the role of an average person who becomes an “investigator.” The professor, the mechanic, the secretary, and more come together to peer into the unknown and fight back against the monsters. With the help of mundane items, mystical defenses, and some lucky dice rolls, players must uncover clues to advance the story while warding against doom growing in each of Arkham’s five neighborhoods.

Arkham Horror is a time intensive experience, though not as much as previous editions. It's best to play with the lights down low, a spooky Spotify playlist going in the background, and with teens who love a scary, atmospheric story enough to stay engaged throughout.

Betrayal at the House on the Hill from Avalon Hill
Age Rating: 12+

Betrayal at House on the Hill has long been one of my favorite board games to play when I want to be spooked and tell fun stories through gameplay (without having to roll endless 20-sided dice). Much like Arkham Horror, Betrayal is not a game for younger children as it requires a lot of reading and it can be somewhat frightening in certain "haunts."

The game's goal is to explore a haunted mansion with your friends -- you can choose between a number of different characters, including children, teens, and adults -- until someone triggers the haunt and reveals the "traitor" to the rest of the party. Depending on which "omen" triggered the haunt and where said "omen" was found, the betrayer goes through a book with a number of different haunts to find the one that applies to this particular game.

Once the haunt has been revealed and the traitor has their goal, the players must determine how they will survive and thwart the betrayer before the story reaches an inevitable end. Betrayal at House on the Hill is another time intensive game. With expansions like Widow's Walk and offshoots like Legacy and Betrayal at Baldur's Gate, there is a lot of replayability. It's not all spooky, but it's a rewarding experience, especially when you (as the betrayer) stick it to your friends.

As a little kid in Canada, my elementary school teachers used to play a game called "Heads Up, Seven Up" -- it was a delightful thrill that, as an adult, reminds me quite a bit of how playing One Night Ultimate Werewolf feels. Where Arkham Horror and Betrayal at House of the Hill take quite a bit of time to play from start to finish, One Night Ultimate Werewolf is a social deduction game that takes 10-15 minutes to play.

Each player blindly chooses a role to play, including Seer, Villager, Tanner, Robber, Troublemaker, Drunk, Hunter, Mason, Insomniac, Minion, Doppelganger, and, of course Werewolf. You don't have to play with all of these roles (a handful of them are fairly complex and somewhat out of the play range for younger children), so pick and choose depending on the experience you're looking to have. Each role has a different set of rules.

Once you've downloaded the app (available on iOS and Android), you choose the roles you're playing with and are guided through the experience. You can, of course, opt to run the game yourself, but the app allows everyone to participate and not have someone as the game master.

The aim of the game is to get the werewolf (or wolves, depending on how many players you have) to reveal themselves or for the werewolf to successfully masquerade as a human… and therefore succeed in nomming the humans. The Tanner is the only human who loses if the humans win, as he really, really hates his job and doesn't want to live anymore. (The in-game lore is a bit dark.)