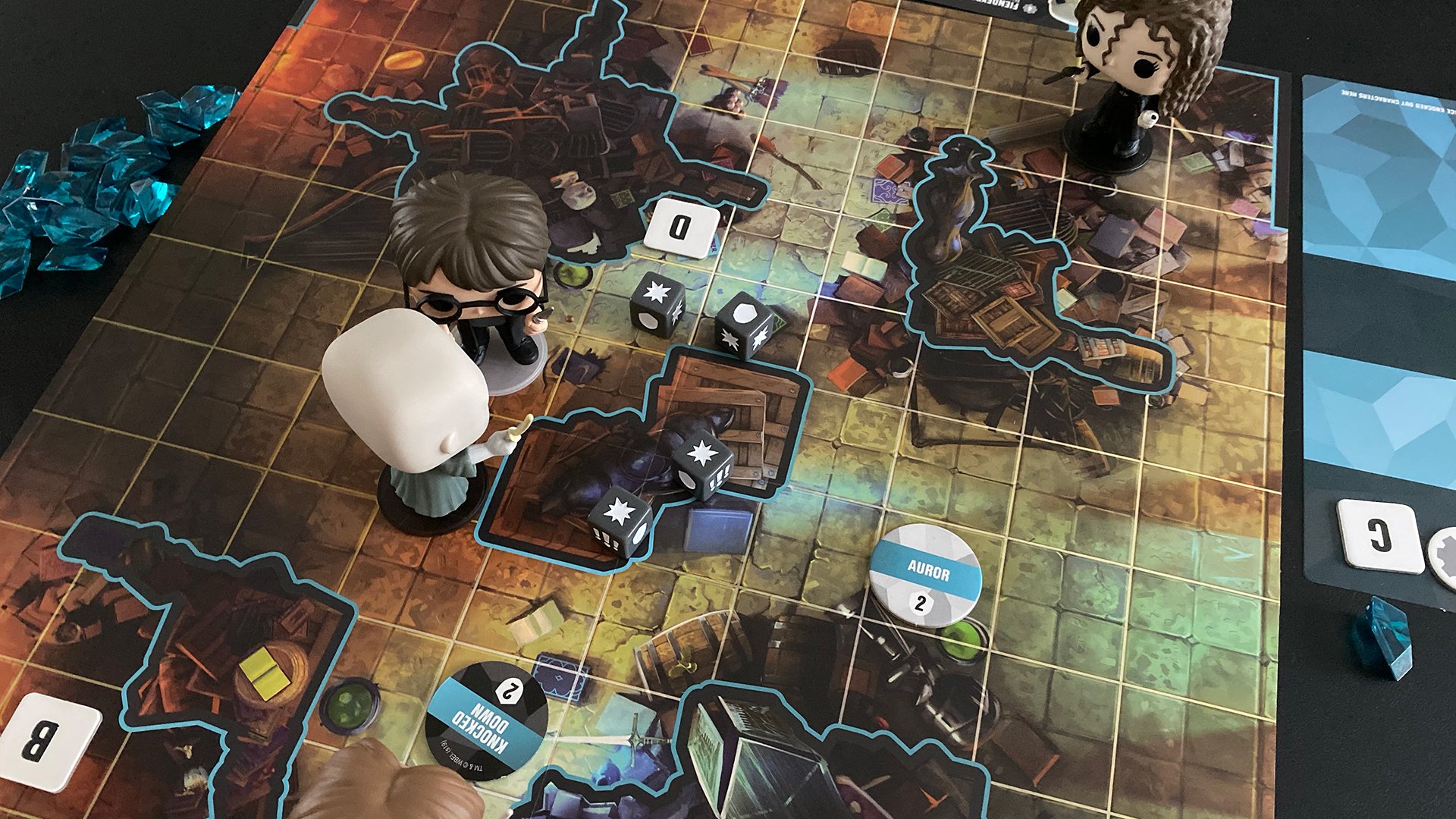 Earlier this year, pop culture collectibles company Funko revealed Funkoverse, its new line of strategy tabletop games. Rather than being just a single game, Funkoverse follows Funko’s tradition of releasing something for everyone, with Funkoverse games being available in four themes at launch: Harry Potter, DC Comics, Rick & Morty, and Golden Girls.

For DC Comics and Harry Potter, there are two different versions of the board game to choose from. One is specifically for two players, while the other supports 2-4 people. We had a chance to check out the Harry Potter games before they launch later this year.

Each Funkoverse game comes with at least two three-inch Funko figures based on characters from the theme you’ve chosen. In the case of Harry Potter, the two-player game includes Ron Weasley and Draco Malfoy, while the larger game includes Harry Potter, Hermione Granger, Bellatrix Lestrange, and Lord Voldemort.

Both games let you choose from the same four scenarios, but gameplay takes place in different areas on a two-sided game board. Specifically, in the two-player version, games take place either in the Potions Classroom or the Forbidden Forest, while the 2-4 player game lets you play in Diagon Alley and the Room of Requirement.

How do you play Funkoverse?

Even though the games include different boards and characters, both have the same basic gameplay rules and scenarios to choose from:

All four scenarios also use special point tokens that are placed on specific points around the board. Interacting with a score token earns you a point instantly, so you can strategize whether to go after these tokens or focus on the overall goal in each game.

After choosing the scenario, players take turns completing actions with each of their characters. Actions include things like moving around the board, challenging an opponent (both adjacent and ranged attacks are possible), assisting an ally character who has been knocked down, rallying (a knocked-down character can stand back up), and more. Each character can technically complete two actions in a row before they become “exhausted,” though rallying uses up both of these actions in a single move.

When you want to fight, or challenge, a rival character, you can either complete a basic challenge or use one of your character’s abilities to attack them. Abilities require tokens to perform, while a basic challenge can be performed by any character, so long as they’re adjacent to the rival they’re trying to challenge.

If you want to use an ability, you’ll roll the number of dice indicated on the attacking character’s card, while a basic challenge uses two dice every time. Rather than numbers, the dice are covered in three different symbols: starbursts, exclamation points, and shields. Once the attacker rolls the required number of dice, they’ll count the number of starbursts and exclamation point symbols to determine their success score.

The defender will then roll the number of dice indicated on their character’s card (the character who is being attacked), and count the number of shields and exclamation points to determine if they can hold off the attack. If they have less points than the attacker, they’re knocked down but not out. If they successfully defend, nothing happens and the game continues (unless otherwise specified).

As abilities are used, their associated ability tokens are placed on a cooldown track near the side of the board. This prevents players from using the same ability on every turn, and adds strategy to the experience, as you’ll need to keep in mind how long it will be before you can access a certain ability again. (For the record, score tokens are also moved to the cooldown track once they’re interacted with.)

If a character that’s knocked down is successfully challenged again before they can stand up, they’re knocked out and are moved to the bottom of the cooldown track, preventing them from taking their next turn.

But is Funkoverse any fun to play?

We were only able to try the two-player versions of both games, and the results were mixed. Even though there are four scenarios to choose from, the resulting gameplay isn’t all that varied, and we would have liked if more secondary items or gameplay rules were included to change things up in each game. That being said, the 2-4 player game was more enjoyable than the two-player option, since each player had more individual characters on their team (three instead of two), so more action took place during each round.

While we would have wanted more complexity for adults, Funkoverse is recommended for players 10+, so the simplicity will help younger players bounce between the different scenarios easily without having to relearn the entire game.

In addition, we also really appreciate the game’s flexibility in allowing you to change the rules to fit your family’s play style. Using the standard gameplay rules, a single game can last a while if your goal is to completely knock out your rival’s characters, since each one needs to be knocked down first, and then knocked out before they have a chance to stand up. If you want a faster game, simply remove the “knocked down” portion so that each challenge is for an instant K.O.

Creative players could even use the game’s components to create their own play modes (or tweak the existing modes) to introduce more variety to the experience.

Finally, we like that each game can be combined with other Funkoverse titles, so every player can control their favorite characters in each game, without the gameplay really changing.

What’s the verdict? Should I get it?

Funkoverse has an interesting premise (and adorable vinyl figures), but if you’re looking for a complex experience that will really test your strategic thinking, this isn’t it. It’s a more casual experience that kids can easily understand, but it may even be too simple to keep their attention after multiple playthroughs.