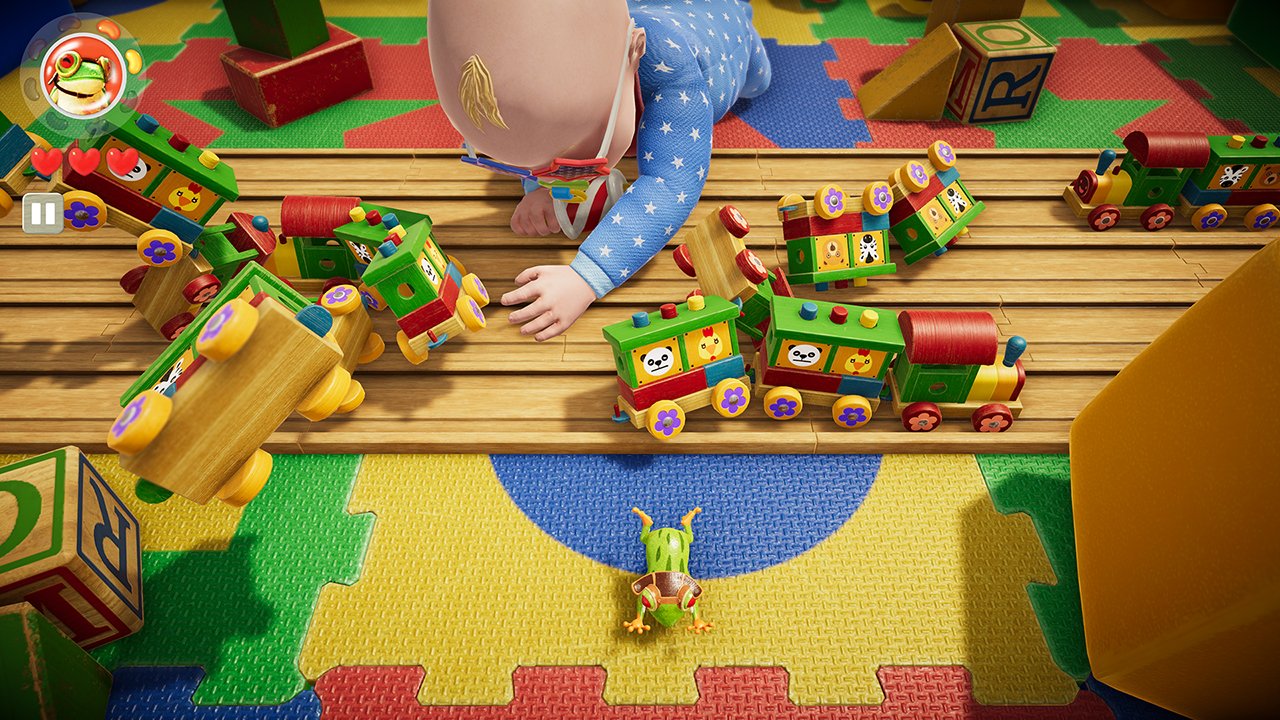 Frogger in Toy Town is the latest game in the classic Frogger franchise, which is now available exclusively on Apple Arcade. It challenges players to help Frogger rescue baby froglets who have become trapped inside human houses following a tornado.

Gameplay is level-based, with each level asking players to safely make it to the end of the stage while rescuing as many froglets as possible (you can technically complete a stage without rescuing any froglets if things go poorly).

Each environment is full of obstacles, like little toy cars that drive across the screen, challenging you to time your jumps between them so as to not get run over. You’ll also need to watch out for additional obstacles, like bouncing spring toys and pens that fly out of cups. Froglets are scattered throughout each stage. Some are near ground level, while others require Frogger to climb structures like towers of toy blocks or a vacuum cleaner to reach them (as examples). Simply touching a froglet allows you to collect it.

The camera is constantly pushing “forward,” encouraging you to keep moving, so if you need to move backwards to pick up a froglet, you’ll need to do it quickly before the screen moves too far ahead. Thankfully, you can pick up power-ups as you play that can help you move past obstacles, but the game is still tricky.

If you happen to get hit by an obstacle, Frogger will lose one of his three hearts, and if Frogger has any froglets with him when he gets hit, they’ll also be lost. Additional hearts can sometimes be found in the middle of stages.

In addition to completing stages, you can earn up to three stars on each stage by finishing specific actions within them. For instance, one star may be earned by completing a stage without getting hit by a car, while another may be earned by rescuing every single froglet in the level.

Frogger in Toy Town is rated 4+, and as with all games on Apple Arcade, it doesn’t include advertisements or in-app purchases.

Check out five minutes of Frogger in Toy Town gameplay below to see how this classic franchise has been updated for modern audiences.