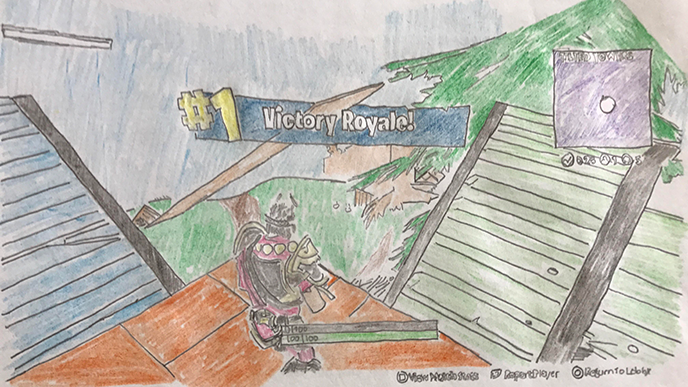 If you asked teenagers to describe one of the happiest moments of their lives, you might hear about driver’s licenses and first dates. For one student though, it’s all about that sweet victory in Fortnite.

Reddit user and Michigan English teacher murdo1tj asked their students to draw one of the happiest moments of their lives as an assignment related to the chapter in “The Catcher in the Rye” where the book’s narrator visits the Museum of Natural History.

One student, an 11th grader, responded by drawing a picture depicting the moment he earned a “#1 Victory Royale” in Fortnite. The popular battle royale game challenges 100 players to be the last one standing while scavenging for resources in a large arena that shrinks over time. With so many players in each game, coming out on top is no easy feat.

The student drew the picture in less than an hour during class. Not only is he a great Fortnite player, but he’s a pretty good artist, too.

Fortnite is currently the biggest game in the world, and while some schools have responded to that popularity by sending warnings to parents, some teachers are using the game to make their students more productive. For instance, Waypoint shared the story of a Chicago teacher named Rachel, who convinced her students to finish their work without interruption so they could have a “big discussion” about the game. In addition, Waypoint said an algebra teacher from Oregon used the promise of a class Fortnite game to inspire a student to stay awake during class.

Parents, if your kids are into Fortnite and other video games, encourage them to include their love of gaming in assignments that may fit the theme. Normal, “boring” homework may become a bit more fun. Just make sure they know the line between school time and playtime, as such a popular game can easily become a distraction if not kept in check.