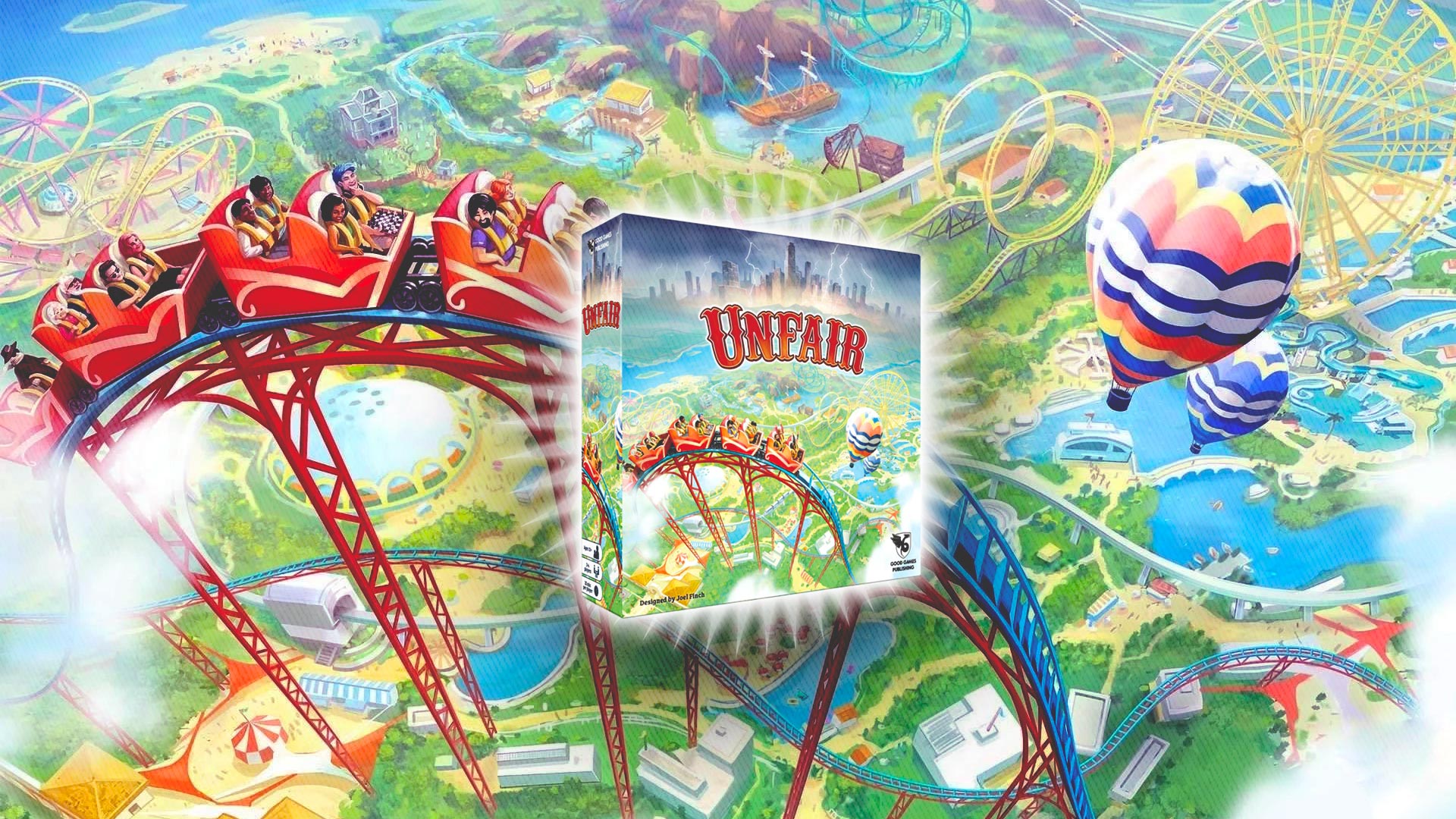 Theme parks are the ultimate in family-friendly entertainment. From rollercoasters and shows to gift shops and restaurants, most theme parks offer something for everyone in the family. Unfair, a strategy tabletop game from Good Games Publishing, looks to capture the fun of theme parks by letting each player build one of their own, while also messing with their opponents on the road to success.

Unfair is a theme park building strategy game for 2-5 players aged 14+, which lets players combine cards from multiple themed decks to create their own theme park, with the goal of having the most points at the end of eight multi-stage rounds.

The base game of Unfair includes six themed decks -- Pirate, Robot, Vampire, Jungle, Ninja, and Gangster -- while the ABDW expansion adds in four more: Alien, B-Movie, Dinosaur, and Western (more on the expansion in a bit).

How do you play Unfair?

First, there’s the setup. Each game uses one deck for each player, so in a two-player game, you’d use only two decks. Tokens let you randomly choose which decks to use in each game, or you can just choose the ones you want. Decks aren’t assigned to each player; instead, all of the “like” cards from each deck are combined (things like “Park” cards and “Event” cards) into their own separate piles to use during all rounds of play. This means, by the end of the game, your park may have multiple rides and attractions with different themes, such as a pirate-themed roller coaster, or a robot-themed restaurant.

Each round is split into multiple ”Steps.” Here’s a quick overview:

Event Step: Players draw and play “Event” cards from the Event deck, which each have two effects for players to choose from -- one is a positive effect they can apply to their own park (for instance, earn free coins at the end of the round), while the other is a sabotage they can use to hurt an opponent (as an example, force them to close a particular attraction for a single round, unless they have a card to block the move).

In the Event Step, you also draw the top card from the “City” deck, which serves as the game’s timer. The first four cards in the deck are “Funfair City” cards, which have positive effects that apply to everyone for the round. The last four are “Unfair City” cards, which have negative effects that apply to everyone. When the last Unfair City card is revealed, you’re on the final round.

Park Step: Players can use their starting currency (or any they’ve earned while playing) to build rides, attractions, and upgrades in their parks, as well as hire staff members, using the Park Cards in their hands, or those they’ve pulled from a communal market in the center of the table. Upgrades are things like air conditioning and more comfortable seating, which can be attached to attractions to make them more valuable in terms of profits, as well as make them worth more points at the end of the game.

Many cards have a star rating in the top-right corner, which represents one or more guests that have entered the park. During the scoring phase of each round (the Guests Step), you’ll earn one coin for each star, so you’ll likely want to build lots of attractions with lots of upgrades to have as many stars as possible at the end of each round. (Your final point total for the game is calculated differently, and it isn’t determined until the very end of play.)

During the Park Step, players take turns completing actions until everyone has completed three, though certain cards may allow players to take more.

Finally, many (though not all) Park Cards have their own special effects, or abilities, which can be applied at multiple points throughout the game.

Guests Step: Players add the number of guests (stars) in their park and receive one coin for each star. By default, each park has a guest capacity of 15, though some cards allow you to increase this, thereby ensuring you can earn more coins as your park continues to grow.

Cleanup Step: The market is wiped and restocked with six new Park Cards, any attractions that were closed or staff members that were taken out of play are reactivated, and active Event cards are moved to the discard pile so that the next round can begin fresh.

There are two other major gameplay elements worth mentioning. First, the game comes with Blueprint cards, which players have the option to pick up during the Park Step. These Blueprint cards each have a primary (and sometimes secondary goal) to complete by the end of the game, but you’ll need to keep these goals secret from your opponents so they don’t try to sabotage your efforts. Blueprint cards have varying difficulty levels, with more difficult cards resulting in more points being rewarded at the end of the game if they’re successfully completed. If you fail to complete the primary requirement on a Blueprint card, 10 points are taken away from your final total.

Finally, each player receives two Showcase cards at the beginning of the game, each containing an expensive Super Attraction that comes with a powerful ability. You can only have one Super Attraction in your park, so strategy is needed to decide which ability would be more beneficial in the current game.

How do the different themed decks affect gameplay?

While all of the decks include some common cards, others are themed to their specific decks. For instance, a Nimble Chopsticks restaurant comes in the Ninja deck, while the Jungle deck includes cards like a Tiger Experience leisure ride and an Idol of the Clenched Fist upgrade. Other cards simply allow you to add a specific kind of theming to a ride or attraction without one.

Not only are the themed cards fun to look at, with beautiful artwork, but some of the game’s Blueprint cards will challenge you to construct your park to meet certain theming requirements.

Finally, some extra components (dice and items called “mesmerism tokens”) are only used by certain decks, but even then they’re used sparingly.

This is a lot to take in. Is this game easy to learn?

Unfair is definitely complex, but it’s not so overwhelming as to prevent newcomers from learning the ropes on their own. It would be helpful if someone at the table was already familiar with the rules, but if not, you can expect your first game to last a couple of hours as you learn the in’s and out’s of the multiple-step rounds.

We did have an issue with a few of the cards containing prompts or effects that were worded too vaguely to easily understand. When we ran into one of these cards, we made a decision at the table as to how the card should be applied and simply stuck with it, which solved the problem easily enough.

The game’s Super Attractions are designed to be powerful, which is why you’ll have to wait a while before actually building one in your park (you need at least five Stars and enough coins to account for the high price tag). However, some seemed a bit too powerful, resulting in score totals where one player earned double the number of points at the end of the game.

What causes this is up for debate. Was it an issue with the game being unfairly balanced (the cards are simply too powerful), or was it that other players didn’t do enough to try and stop this card from being active (for instance, by playing a sabotaging Event card to close the attraction down each round)? Of course, luck of the draw also plays an important role here; if you never have the right cards to stop your opponent, there’s not much you can do at the end of the day.

Overall, once you learn the rules, Unfair’s gameplay is pretty straightforward, but there’s a huge amount of strategy at work here. During the Park Step, you can choose between lots of different actions on each of your three (or more) turns, so you’ll need to decide whether to focus on building your own park, or whether to use some of those turns trying to hurt your opponent(s).

While Unfair has enough going on to keep things feeling fresh for quite a few games, it also includes a series of optional “Game Changer” cards that can greatly affect the gameplay if you’re looking to try something different.

For instance, the School Vacation game changer removes every card from the game except for the Park cards, creating a much more streamlined (and quick playing) game that would be easier for younger players to dive into.

Or, if you’re not into sabotage, the World Peace game changer prevents players from using Event or Park card effects that affect other players, and so on.

How does the ABDW expansion change the game?

As we mentioned before, the ABDW expansion includes four themed decks (Alien, B-Movie, Dinosaur, and Western), which can be mixed and matched with Unfair’s original six decks (the game still only supports a maximum of five players.

Some of these decks add a lot of complexity to the game. For instance, the Alien deck introduces the concept of alien abductions (this applies to staff members), as well as a second type of currency that can be used to purchase Alien-themed cards, while the Dinosaur deck lets you build dinosaur paddocks next to your attractions. A dice roll during the Event Step will determine whether each of these dinosaurs will escape their enclosure, and if they do, you’ll need to take the action indicated on the card as a result (this will likely negatively affect your park).

The expansion also includes a set of updated cards that are meant to replace the matching cards in the original game. These new cards may have clarified wording, updated symbols, or some other change that makes them the new standard, but they unfortunately don’t fix all of the game’s clarity issues. It’s possible more updates will be released in the future.

Unfair is a fun, yet challenging strategy game that multiple kinds of gamers can enjoy, whether they’re into being super aggressive and attacking other players, or doing things on their own to make their park the best it can be. The ABDW expansion adds lots of clever variety to the mix, without making the game feel overwhelming.

We’re concerned about the power of some of the game’s Super Attractions (especially the first time you encounter them), but once you’re prepared for their arrival, you can better react to ensure you still have a chance at winning the game.

While Unfair is likely too complex for younger players, the Game Changers that focus on simplifying the game make it a much more approachable experience for those who may not be prepared for (or interested in) such in-depth strategic thinking.

Disclosure: Good Games Publishing provided SuperParent with a copy of Unfair and the ABDW Expansion for coverage purposes.