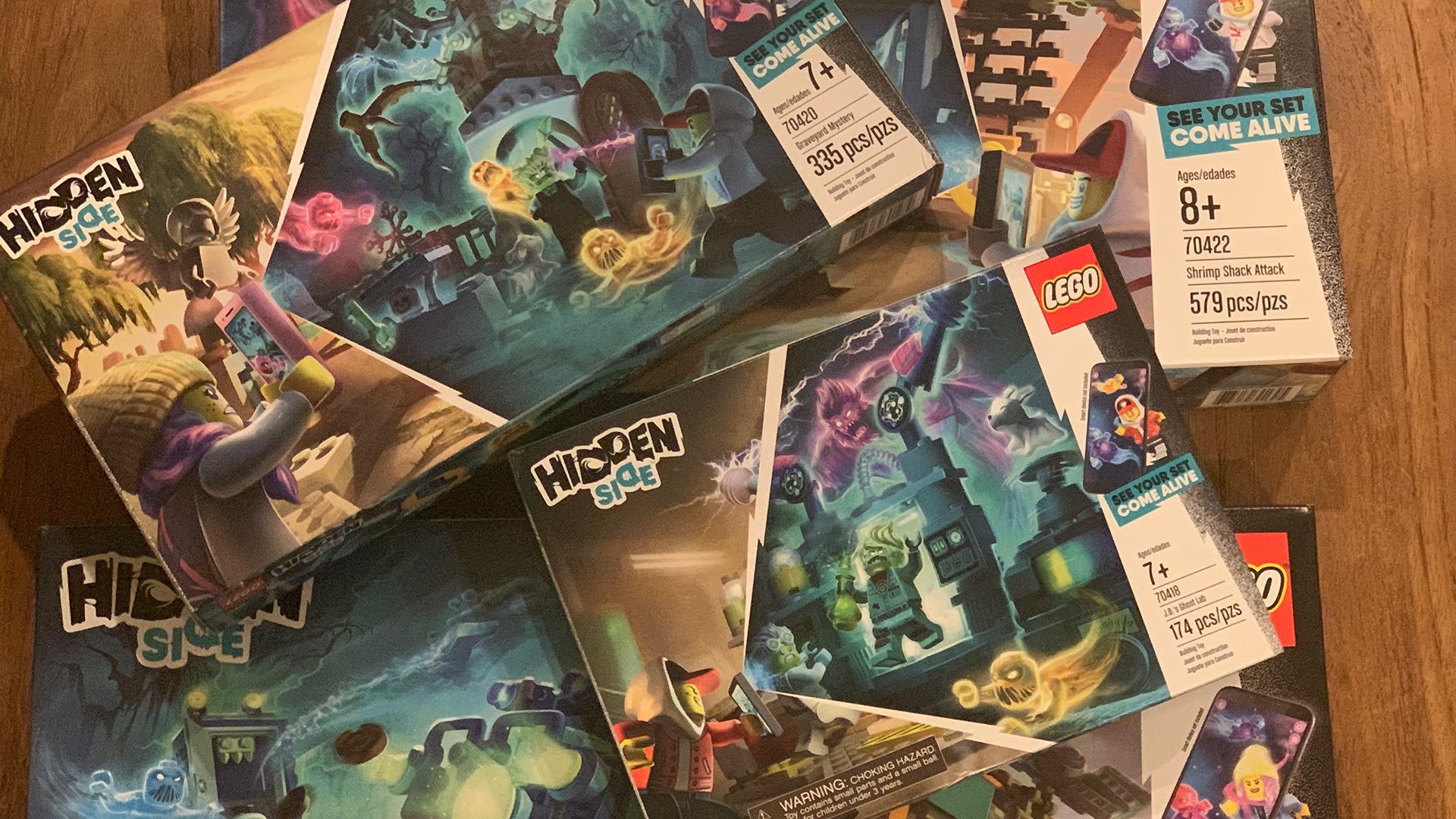 The toys-to-life concept has come and gone several times over: Buy a bunch of plastic to activate within a game. Does Lego have what it takes to succeed where Disney, Activision, Ubisoft…and, yes, even Lego itself have previously tread? Lego's new Hidden Side line of building toys flips the premise. And it works. We consulted with our resident 6-year-old master builder, testing five of the eight new sets that have hit store shelves. What does he think about the games – and paranormal port-a-potties? Keep reading to find out.

How is this any different from my toys-to-life stuff now sitting in storage?

Instead of asking you to buy superfluous gear to hitch onto a console, Lego only needs you to break out your iOS- or Android-powered phone. Download the free app and you’re breathing Augmented Reality (AR) gaming goodness into these Hidden Side Lego sets. After all, people still gleefully fork over cash to build these brick beauties. Now, they’ve layered a series of fun games over what your young builders would likely want, anyhow.

What’s the premise behind the Hidden Side Lego sets?

We’ve already talked in broad terms about it here on SuperParent, but here’s the two-second breakdown: The world may look normal, but the town of Newbury is lousy with hauntings right now. EVERYthing seems to be getting possessed. It’s up to a bunch of young ghost hunters to locate and fight ghouls with their smartphones. Or, if your kid’s feelin’ it, be a ghost (in the app).

So, you buy the box and build the Lego model as you would any other. Fire up the app, match the on-screen silhouette and you’re in the world. A virtual stage pops up, specific to each Lego set. Using color-coded sections of the models are the key to advancing the game.

You’re looking for hidden spots with “gloom.” As you’re doing some spectral spring cleaning, there’s this balance as you’re quickly scanning the AR landscape. You’re conserving your in-game “phone’s” battery before it runs dry and your ghost-busting sessions ends. (Funnily enough, we did notice that the game does draw a fair bit of power during our initial tests.)

Along the way, you’ll rouse angry poltergeists or get the unwanted attention of the resident big bad boss monster lurking inside each playset. Defeat these creeps and you’re earning points toward upgrades.

Among the things you earn: You unlock, upgrade, and can control a gang of ghosts in a wholly separate “Ghost” mode. It controls like a mini third-person action game with on-screen virtual sticks as your job becomes sliding around your new haunt, spreading gloom while avoiding a hunter’s hovering virtual phone.

What about the test kits and this thing about paranormal Port-a-Potties?

We went straight to building the models. After all, that’s what this is all about. Our resident master builder made short work of JB’s Ghost Lab and Graveyard Mystery. The older builder put together the Shrimp Boat and the Shrimp Shack Attack just fine, but the Paranormal Intercept Bus 3000 kit got center stage with the kid. Why? Well, for starters, it’s a tricked-out school bus. With ghostbusting gear. He loved helping construct -- and especially playing with -- this kit. Just be aware that the back half with the windows can be a tad finicky during the tail end of the build. The passenger section crumbled on the first try. Other than that, though, it was no more challenging than any other Lego kit our kid tackled. It houses a bunch of great little details. Articulated satellite antennas, weapons, cameras, and all sorts of color-coded parts to explore in AR.

The REAL star of this Paranomal bus kit, though, was the port-a-potty. In the town of Newbury, this unassuming plastic outhouse holds a spooky secret. When possessed, it grows feet, eyes and apparently spits out…let’s just say “brown discs.”

You could shell out $50 for the kit, play with the virtual app, and even push the bus around the kid’s playroom all day long. But the second you say that, “you can build a haunted toilet that shoots poop,” you’ve pretty much nailed the 6-year-old (and the 30-somethings-that-are-basically-giant-children) demographic.

Another thing I should point out: The AR recognition is a little forgiving. Our young tester likes to build a kit then iterate upon it, adding parts. So long as a good chunk of the base model remains, you can stack on bricks and the AR games will still activate. If you’ve got a Kragle bandolier and don’t wanna change a thing, that’s fine too, of course.

Will Lego’s Hidden Side succeed – or just go to another bin?

There’s no real downside to Hidden Side, save for any expectations you’re packing.

Disney and Activision scuttled their toys-to-life efforts. Ubisoft released an awesome spacey toy-to-life take just last year. Even Lego had us entering different Dimensions. But it’s gone down the same every time: Trying to get people to buy toys to play a complex video game becomes a harder sell.

But Hidden Side ain’t that.

People are going to buy Lego kits. That is just a fact of natural law at this point. The Hidden Side models are good, and they fall right in line with pricing we’ve seen with similar Lego boxes.

People already have AR-capable phones. The app-based AR games themselves are fun and offer a decent amount to do. Make no mistake, though. This isn’t a deep video game experience like, say, Lego Dimensions. It was never intended to be that way. Go in with that mindset and both you and your kids will have a blast.

At the very least, it’s a great, fun freebie that sits on top of a Lego kit people would likely grab. And if Lego decided to go ahead and add this functionality to other sets, we’d be all for it.

Disclosure: Lego provided Superparent with two kits to test for coverage purposes. We then went ahead and bought three of our own for good measure to see a variety of the available experiences.