Play This, Not That: Gears 5 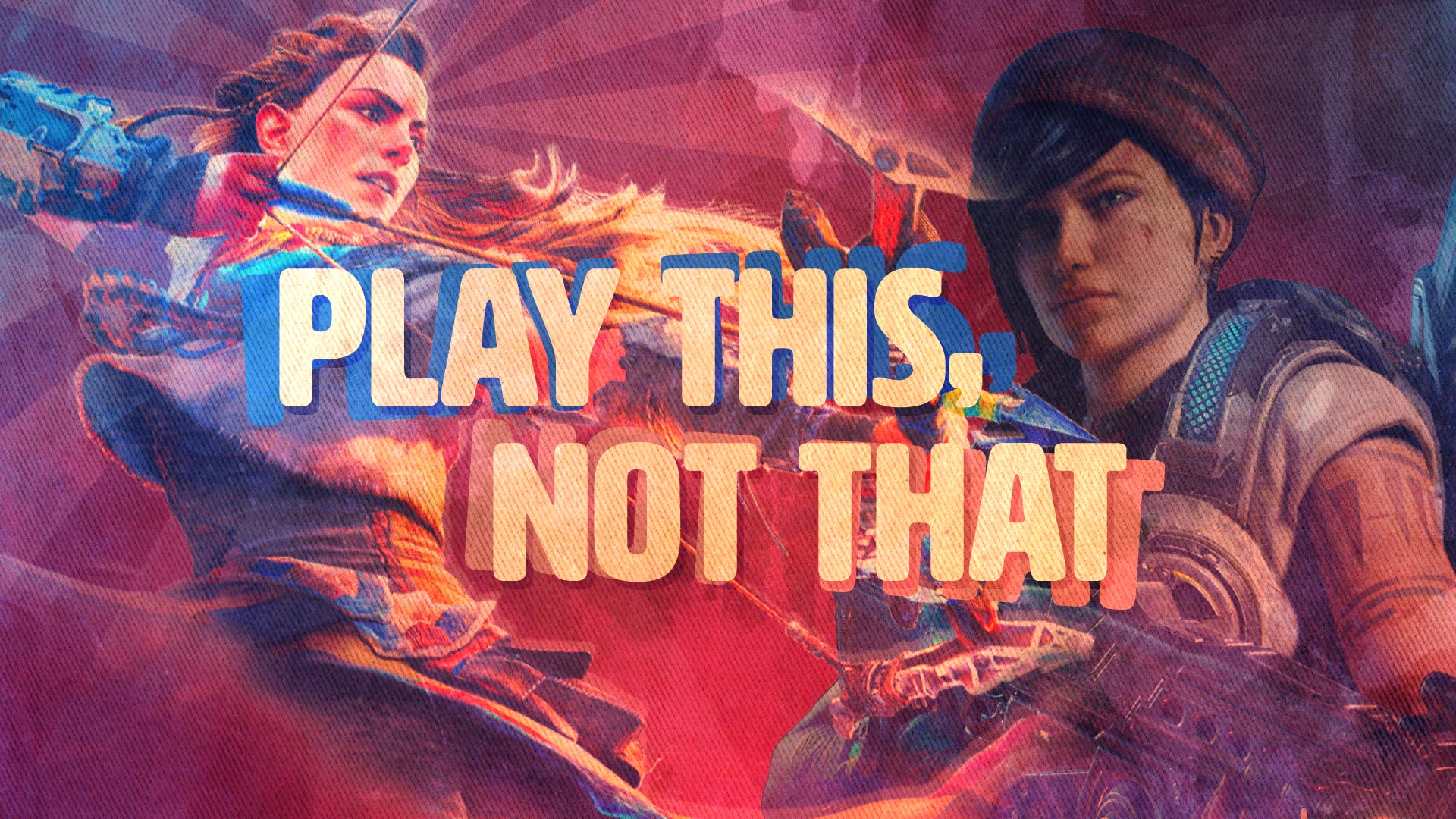 Gears 5 is the latest installment in the popular Gears of War franchise. It picks up after the events of Gears of War 4, following Kait and other returning characters on a new mission against brutal enemies called The Swarm.

The game has earned an M-rating from the ESRB, with Content Descriptors for “Blood and Gore,” “Intense Violence,” and “Strong Language.” This M-rating means the game has been deemed inappropriate for players under 17.

To its credit, Gears 5 is actually one of the more “family-friendly” M-rated titles, in that it includes options for turning off the game’s gore and censoring the swearing contained in the in-game dialogue. However, the Gears of War franchise is dark, gritty, and extremely violent, even with these options activated.

If your young teens have expressed an interest in playing Gears 5, here are some alternatives to consider, which touch on some of the same basic gameplay features, but without the over-the-top violence.

Horizon: Zero Dawn follows a young woman named Aloy on an epic quest in a post-apocalyptic world filled with dangerous robotic enemies. This open-world exploration game may not initially seem very similar to Gears 5, but the two games actually have a lot in common. For instance, they both feature a strong female main character and a third-person camera perspective (the camera is placed behind the player’s character). Plus, both games let players use cover to their advantage during combat, and both even feature robots.

Gears 5 lets players team up with friends to complete the campaign together, as well as compete with and against others around the world in a variety of multiplayer modes. If your kids like playing with and/or against others, consider Destiny 2, which also supports cooperative and competitive gameplay. This sci-fi first-person shooter has a different camera perspective than Gears 5 (in this one, you’re looking through the eyes of your character in a first-person perspective), but both contain gun-based combat with plenty of different weapons to choose from. What’s more: a free-to-play version of the game, Destiny 2: New Light, will launch on October 1, 2019 if your kids can wait until then.

This open-world action game takes players to 1980’s Sweden, where they’ll need to defend themselves against a variety of deadly Machines. Players can complete the game on their own, or work with up to three friends in cooperative multiplayer. In Generation Zero, each enemy has a “persistent” presence in the in-game world, meaning players may encounter the same enemy more than once before actually defeating it. Any damage they deal to an enemy (for instance, if they happen to break a piece of its equipment) will still be there in future encounters, adding some realism to the experience.

Set in the iconic Star Wars universe, Battlefront 2 features an epic single-player campaign mode, as well as a variety of online multiplayer modes. The campaign takes place after the second Death Star has been destroyed, and follows an Imperial commander named Iden Versio through a dramatic storyline that sees her question her allegiance to the Empire. Like Gears 5, Star Wars Battlefront II supports a third-person camera perspective, though you can also switch to a first-person perspective if that better fits your play style.

Set in 1930’s Egypt, Strange Brigade challenges players to defeat Seteki the Witch Queen and “her army of mummified monstrosities.” This third-person shooter lets players go it alone, or team up with up to three friends for some 2-4 player online co-op action. In addition to a campaign mode, players can try out two other modes for 1-4 players: Score Attack and Horde. Gears 5 also contains a Horde mode, with both challenging players to take on waves of enemies.