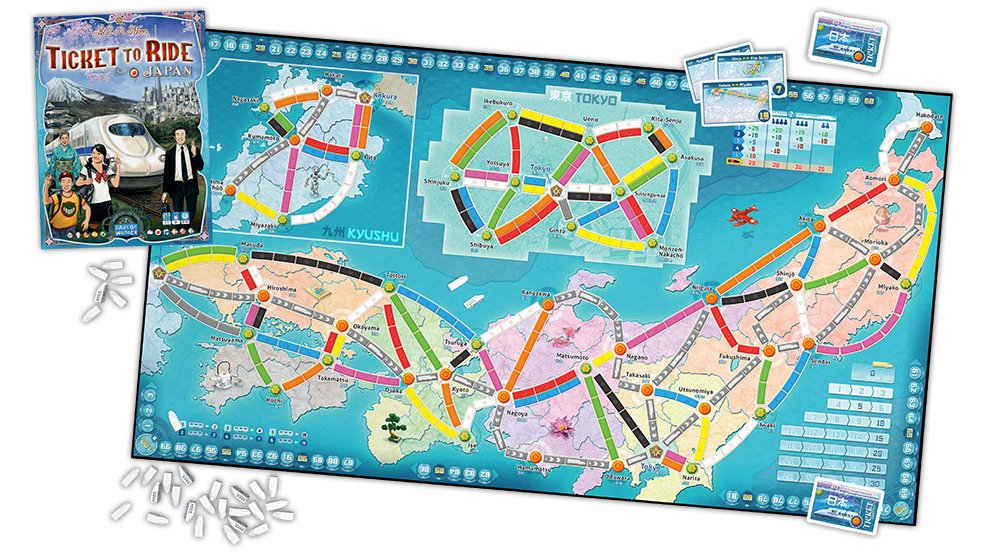 Ticket to Ride is a popular series of board games from Days of Wonder that (typically) allows users to become railroad tycoons with the goal of earning as many points as possible by creating railway lines to connect pairs of cities found on Destination Tickets. Through a variety of main games and expansions, the Ticket to Ride series has taken players all over the world, from the U.S. and France to India, Germany, and beyond.

The game’s next expansion, Ticket to Ride - Japan and Italy, will allow 2-5 players to travel to two different locations using a double-sided board.

In Ticket to Ride Japan, players will still work against one another to earn as many points as possible, but the game will also feature a cooperative Bullet Train feature. Some of the routes on the game board are reserved for Bullet Trains.

Once one of the Bullet Train routes is claimed, all players can use it to complete their own Destination Tickets. And, according to the Days of Wonder blog, “the players who contribute most to this shared project will also be rewarded with a larger bonus.”

Meanwhile, the Italian side of the board splits the map into Italy’s different regions, which includes new Ferry Routes that can connect the board’s various islands. According to the blog post, players can “[c]onnect cities from all Regions in the same network to score extra points.”

Since this is an expansion, rather than a standalone game, you’ll need to provide your own trains and train car cards from either the original Ticket to Ride or Ticket to Ride Europe to play.

Ticket to Ride - Japan and Italy is expected to launch in Europe in November 2019, and in North America in January 2020 at a suggested retail price of $40/40€.

While we don’t know the suggested age rating for Ticket to Ride - Japan and Italy just yet, most games in the series are rated 8+. For younger players, Ticket to Ride: First Journey is designed for players as young as six.