Game News Roundup: Kingdom Hearts 3 is Finally Coming Out in 2018 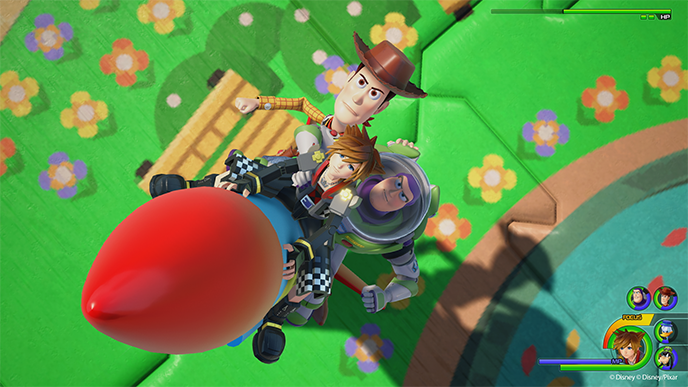 Here’s the latest in video games, from exploring new worlds in Kingdom Hearts 3 to gaming together in No Man’s Sky.

Kingdom Hearts 3 is coming out later this year, 16 years after the debut of the first game in 2002. The mix of Disney properties and Final Fantasy characters is a really popular franchise, full of spin-off games and one of the most complicated storylines around. In a nutshell, the games star a young boy named Sora, who teams up with Donald Duck and Goofy to defeat enemies and bosses as they explore worlds based on popular Disney films.

In Kingdom Hearts 3, players will be able to explore a variety of Disney and Disney Pixar-themed worlds, including ones based on Toy Story and Hercules. Typically, the story from each movie is mixed with the game’s storyline to offer a familiar experience with a twist. This time around, elements from famous Disney theme park attractions, like the Mad Tea Party ride and Big Thunder Mountain, will also be included.

If your family has never tried one of the games in the Kingdom Hearts series, we recommend checking out Kingdom Hearts 1.5 + 2.5 Remix on PlayStation 4 -- it’s one of the best games for kids on the system. The youngest kids might have trouble mastering the games’ action-heavy gameplay (there’s also a lot of text to read), but they can still enjoy watching these Disney characters come to life in new ways as someone else plays.

If your teens are into Fortnite, they might want to stay home this weekend. Fortnite has a new game mode called Solo Showdown, which will only be available until 10:00 A.M. EDT on Monday, May 21. The mode adds a scoring system to the basic Fortnite: Battle Royale gameplay, which pits 100 players against one another in a large arena and challenges them to be the last one standing.

Gamers will earn points at the end of each Solo Showdown game, depending on how long they survived. They’ll need to play at least 50 games to be eligible for the event’s prizes. If they play more than that, only the points they earn in the first 50 games will count toward their final score.

Back up, did you say prizes? Yes, prizes -- and huge ones too. The first place finisher will receive 50,000 V-Bucks, the game’s premium currency, which can be used to purchase cosmetic items and optional Battle Passes. That’s the equivalent of $500 (1000 V-Bucks equals $10). Here’s the prize breakdown:

Each player to complete 50 games will also receive a unique spray they can show off in future games. Parents, before sharing this info with your kids, keep in mind players need to be 16 in order to be eligible for the contest.

No Man’s Sky Will Add Multiplayer This Summer

No Man’s Sky will soon let players team up to explore space together. Released in 2016, the game lets players travel to countless planets, collect crafting resources and visit outposts. Now, they’ll be able to cooperate with, or compete against, others as they explore the universe. This multiplayer feature will be released July 24.

When No Man’s Sky first launched, it was a pretty bland and empty experience. Developer Hello Games has added lots of new features since then, like base-building and farming, to give players more to do. If your kids are into Minecraft, they’ll probably enjoy the game’s exploration and item collecting. If they want more of a challenge, an optional Survival game mode allow them to turn up the difficulty.

Just remember, with multiplayer gameplay comes the potential for your kiddos to be exposed to toxic behavior. Make sure your kids know what to do if this happens, and set up rules about interacting with strangers online.

Pokemon Go’s monthly Community Day event takes place Saturday, May 19. The event will allow players young and old to find far more Charmander than normal for three hours as they explore the great outdoors. In the U.S., the event runs from 2:00 p.m. to 5:00 p.m. EDT.

Even if you and your kiddos have already captured a Charmander (and have its evolved forms, Charmeleon and Charizard), there’s still plenty of reason to head outside to collect more of these adorable Fire-type Pokemon, as every Charmeleon evolved into a Charizard during this event will know the exclusive battle move Blast Burn.

Pokemon Lures will last for three hours when activated during the event, instead of 30 minutes, so feel free to take a break from the action by hanging out at a nearby PokeStop that has an active lure (you’ll know a lure is active when you see pink petals falling near the PokeStop). Have a park with a PokeStop nearby? Take a break on a bench while your kids go nuts collecting Pokemon. The lure will ensure more Pokemon than normal appear for them to capture, but you won’t have to do any extra work - score!