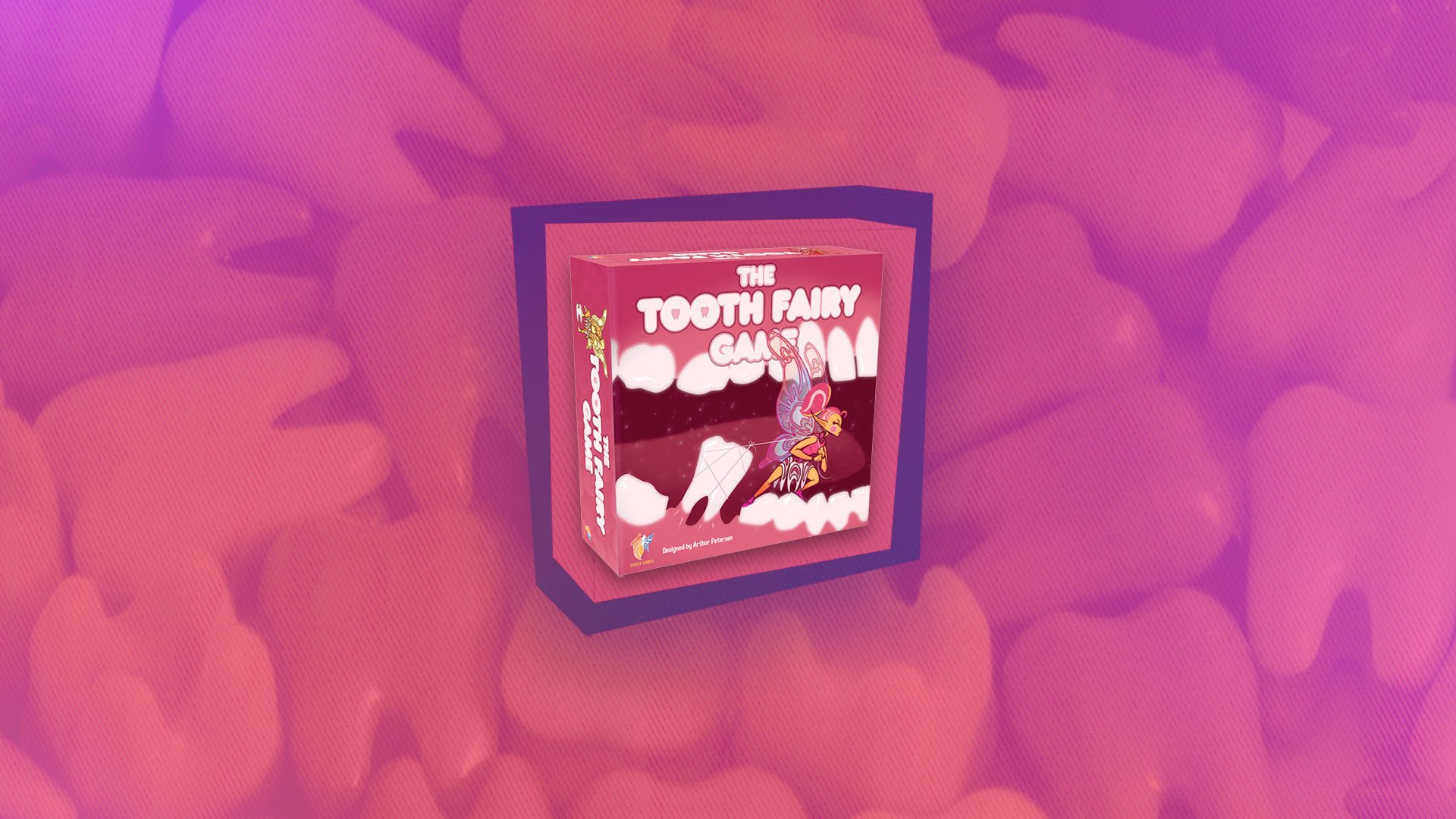 Petersen Games, the tabletop gaming company behind titles like Cthulhu Wars and Orcs Must Die, recently released its first game for kids -- The Tooth Fairy Game -- and SuperParent had a chance to check it out.

What is The Tooth Fairy Game?

The Tooth Fairy Game is a set of four minigames that can be played with small plastic teeth. These teeth tokens come in five colors -- blue, red, yellow, green, and purple -- with five drawstring bags that match those colors, and, depending on the game, there is also one six-sided die. (There are 125 teeth in total, though each game may not use them all.) The game also includes five tooth fairy cards (one for each color), but oddly, they’re not actually used in any of the games (though kids may like playing with them).

The minigames have an age rating of 6+, and all but one of the minigames supports 2-5 players. While the initial minigame is fairly simple, they become progressively more complex, with more strategy involved and less luck.

What are the four different minigames in The Tooth Fairy Game?

Here’s a breakdown of each one.

That’s My Tooth - Players race to be the first one to draw all five teeth of their chosen color from their bag and yell “Tooth Fairy!” Kids can mess with each other by placing teeth they don’t need into another player’s bag.

Kids need to quickly and strategically decide who to give their extra teeth to, so as to avoid giving teeth to someone in the color they actually need (this would help them win, rather than hinder them).

Pulling Teeth - Ten teeth are placed in each drawstring bag, with each player having a bag of their own, and the rest being shared bags in the middle of the table. The goal is to acquire two teeth of each color, holding them in your hand so that your opponent’s can’t see your progress.

On a player’s turn, they roll the dice and complete the action specified in the in-game manual (there are six possible actions, depending on the number you rolled). This may allow them to pull random teeth from a bag, take teeth from another player, or cause another player to put one of their teeth back in a bag. When someone has two teeth of each color in their hand, they shout “Tooth Fairy” to win.

Lie Through Your Teeth - This one is a take on Liar’s Dice, and it uses all 125 teeth. Each player secretly rolls the die and puts a random selection of teeth into their bag that equals the number they rolled. Players must then make “predictions” about how many teeth of a specific color they think are in all of the bags combined.

After you make a prediction, the other players can call you a “liar,” at which point everyone empties their bag and the teeth are counted. If the prediction was higher than the number of teeth in the bags, the player who made the prediction loses and the person who accused them of lying gets half of their teeth. The opposite also applies, so there’s a winner after every accusation.

After a round is over, the game repeats, with players hiding all of their old teeth and a new set of teeth to their bags, depending on the results of their next die roll. The player who has the most teeth at the end of five rounds wins.

Treasure Teeth - Each player chooses a color of teeth, and they’ll use all 25 teeth of that color as “money” to bid on pots of teeth in the center of the table. A die roll determines how many dice players are required to bet, though players can bet up to twice that amount. For instance, if the die roll is a six, players can bet anywhere from 6-12 dice on that round.

Players secretly divide these teeth between both hands, make them into fists, and then hold their firsts out in front of them. (Players can have all of their teeth in a single hand, or divide them in another way.) Each player then selects the hand of another player to reveal the number of teeth inside. The player who had the most teeth in their hand wins the pot. All of the teeth used in this “bidding” are discarded into the box.

The game ends when all of the “treasure” teeth have been won, and the player with the most points (not necessarily individual teeth) wins.

This minigame is the most strategic of the bunch, as kids need to decide how much to risk on a single round. Should they be conservative with their selection, or go big? If players run out of teeth in their own bag, they’ll need to use any teeth they’ve already won (if applicable) to continue playing, which adds even more strategy to the experience.

Are the minigames any fun?

Yes, to a point. This isn’t a board game, since there isn’t a board, and it’s not a card game, since, again, the five tooth fairy cards aren’t actually used in any of the games. There’s so little going on here that the experience feels pretty lacking.

Making a kids game about the tooth fairy is a brilliant idea, but the game never reaches its full potential. The tooth fairy cards instantly attracted our attention to the game in the first place, so it’s very disappointing to see they’re never used.

While there’s decent variety in the four minigames, the novelty here doesn’t last. For $29.99, The Tooth Fairy Game also doesn’t feel like a great value, again, since part of what you’re paying for (the tooth fairy cards) aren’t even used. That isn’t to say that kids can’t use the cards or the teeth to create their own minigames, but as it stands, this one is too expensive to be worth a full-priced investment.

Disclosure: Petersen Games provided SuperParent with a copy of The Tooth Fairy Game for coverage purposes.