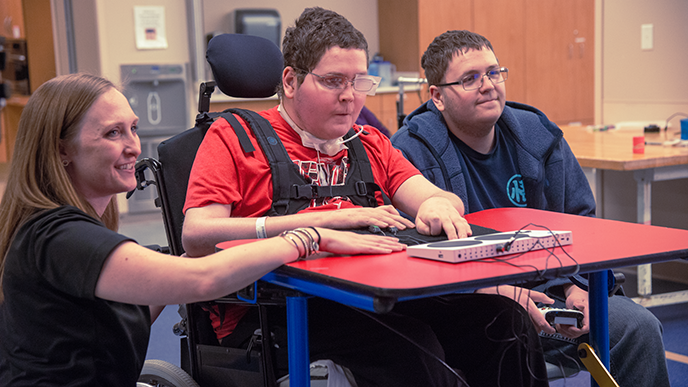 Here’s what’s happening in video games and tech, from an Xbox controller focused on accessibility to Overwatch-themed Nerf guns.

Xbox revealed the Xbox Adaptive Controller, a new controller for the Xbox One and PC that will allow users with disabilities or limited mobility to play games that they may otherwise be unable to. The controller is designed with programmable buttons that can be changed from game to game, and it can also be paired with a variety of extras, like joysticks, buttons and mounts, depending on the user’s needs. For instance, one accessory allows quadriplegics to control a game by blowing air into, or sipping air out of, a joystick they hold in their mouth.

In an interview with GamesBeat, head of Xbox, Phil Spencer, said, “The opportunity to open up gaming to a constituency that isn’t able to play as easily as you and I can, and the goodness in bringing more people to the platform—that’s a pretty special moment.”

The Xbox Adaptive Controller will allow kids and adults to either experience gaming for the first time, or jump back in if a life event has made gaming difficult. Parents will be able to play games with their kids if they were previously unable to, and experience some of the great family fun games can provide. The Xbox Adaptive Controller will launch later this year for $99.99. The extra items, like the joysticks and mounts, will be sold separately by third-party hardware companies.

Go Vacation Offers More Than 50 Activities for Families on Switch

Nintendo announced a new family-friendly game coming to Switch this summer: Go Vacation. If the name sounds familiar, Go Vacation was originally released on Nintendo Wii in 2011. Go Vacation includes over 50 cooperative and competitive activities for families to enjoy, which are split across four themed resorts.

The Marine Resort focuses on water activities, like scuba diving and surfing. The Snow Resort offers activities like skiing and snowmobiling. The Mountain Resort lets players do things like play tennis and go kayaking. Finally, the City Resort includes activities like roller skating and hang gliding.

Go Vacation lets up to four players explore the resorts together, making it a great option for family game night. Plus, the game can help you teach your kids proper sportsmanship if they don’t come out on top (or even if they do).

In 2019, Overwatch fans will be able to take their love of the multiplayer shooter into the backyard thanks to special Nerf guns themed after the game. The new play weapons will be part of Nerf’s “Rival Precision Battling” line, which also features a gun based on Deadpool. We unfortunately don’t know what the Overwatch guns will look like just yet, but judging by the other blasters in the Rival line, they’re bound to look pretty cool.

A new way to play.

Unfortunately, Nerf guns can be pretty pricey, especially when you factor in the cost of accessories, like extra balls. Nerf’s Rival blasters aren’t compatible with regular Nerf accessories, so anything your kids already own (outside of the Rival line) won’t work here. However, if you’re looking for a way to get the kiddos off the couch, picking one up might be just the inspiration they need to head outside.

The First Part of a Major Minecraft Update is Out Now

Any Minecraft fans in your house will probably want some extra time with the game this week (and this month… and this summer…), thanks to the release of the first part of a major update called “Update Aquatic.” The update is now available for players on Xbox One, PC, mobile devices, Oculus Rift and other mixed-reality devices. The update is coming soon to other platforms, like PlayStation 3 and 4, Xbox 360 and Wii U.

So, what’s so special about this release? It adds a ton of new items and creatures to the game’s underwater environments, including coral, kelp, fish, dolphins and more. Plus, there are nine new Ocean biomes (themed in-game environments) to explore. Prior to this release, Minecraft’s underwater areas were fairly empty, so don’t be surprised if you hear a lot of gasping and excitement as kids discover a whole new underwater world.

Minecraft has been a constant hit since its initial release in 2009. The game is so popular with kids that a special Education Edition was released for use in classrooms. This version encourages kids to work together to build projects and solve problems. The Education Edition can also teach kids about chemistry, and even how to code.