Power Rangers: Heroes of the Grid: A SuperParent Tabletop Review 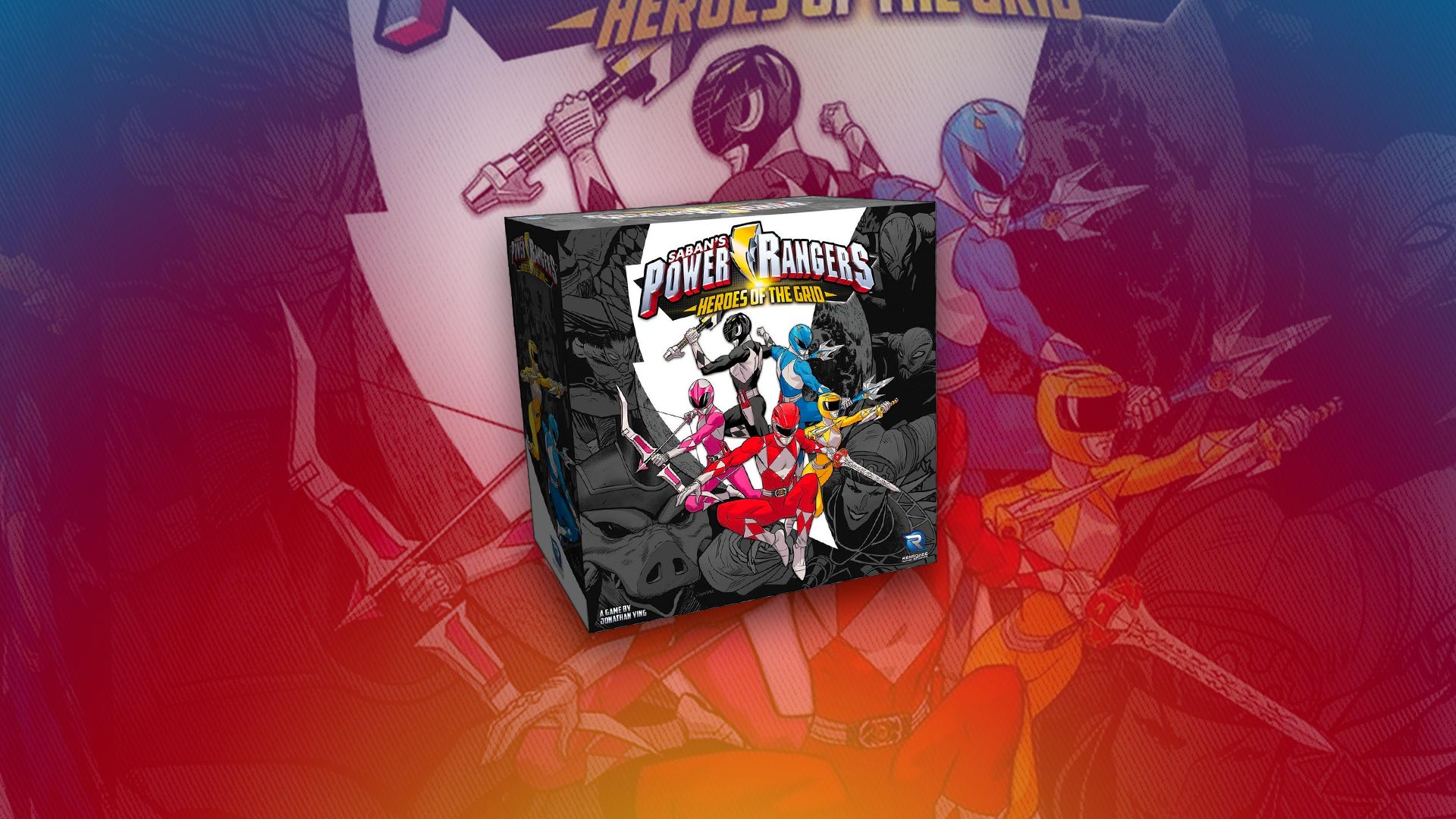 In 1993, the West was introduced to a team of five teenagers with attitude, their neurotic robot ally, a giant head in a glass jar, and dinosaur robots that created a lumbering megabot that seemed a bit too much like Voltron.

Over the following 26 years, the Power Rangers took on many forms, with countless new faces, themes, and hulking “Zord” robots. The campy shows, which blend footage from Japanese “sentai” series and original scenes with Western actors, have a loyal and eager following. For them (and us), Power Rangers: Heroes of the Grid is the game we’ve been waiting decades for.

What is Power Rangers: Heroes of the Grid?

Renegade Game Studios and designer Jonathan Ying have come together to distill the essence of the Power Rangers shows and Boom Studios comics into a cooperative game for one to six players. The core box includes the five original Mighty Morphin’ Power Rangers, four monsters from the original show, one boss (Rita Repulsa, of course), foot soldiers (putties and super putties), and all the tokens, cards, and dice you’ll need.

Throughout the game, players will experience rounds that flow from deploying foot soldiers and monsters, moving around the four regions of Angel Grove, and combatting enemy forces to reduce panic throughout the town. Winning Power Rangers: Heroes of the Grid is a test of endurance. Your Rangers will need to manage the threats until Rita deploys, and fight her at least twice.

If all four locations panic at the same time (by reaching their designated enemy figure limit), you’ll lose immediately. If Rangers are defeated with no extra lives left at the command center, it’s also game over.

At the start of the game, each player receives a character card representing their Ranger, complete with a unique ability that can be activated once during each combat. They also get a unique deck of 10 cards representing combat tactics that are used to play abilities and defend when attacked. Each set of moves is tailored to each Ranger’s personality. For instance, Red Ranger Jason (the leader) can help other characters re-roll dice and play additional cards. Blue Ranger Billy helps other Rangers manipulate their decks and often puts cards back in his instead of discarding them.

During the deployment phase, players will reveal cards from a deck of cards and place figures. Then, the Rangers will react. Each has two actions during each round that can be used for moving, recovering, and initiating battle. There is no fixed turn order, so players can be strategic as a team to determine who will handle threats around Angel Grove.

One player will spend an activation token to initiate combat. However, every Ranger in a location gets to participate. Some cards reference the “lead Ranger,” but otherwise, combat is a team effort.

Combat is cooperative in a way we’ve not seen in many games, and it requires extensive table talk. Typically, only one Ranger gets to play (unless cards allow additional players to contribute). For instance, Black Ranger Zack can play his Mammoth Slam and roll two attack dice before the first monster or foot soldier card activates. However, Red Ranger Jason can play Team Tactics, gain an energy token for the shared pool, and then let another Ranger play a card.

Enemy cards resolve in order from left to right, one at a time with a Ranger turn in between. If a card is defeated before it would activate, nothing happens when it would trigger. This helps players determine which card they should attack on their turn.

When foot soldiers are defeated, they are removed from Angel Grove and placed on the power board. Once you’ve dusted six of them, the Rangers power up and they’ll earn the top card of the Zord deck. This also occurs if the Rangers defeat a monster.

Each time the Rangers earn a card from the Zord deck, one of the dinosaur robots is dispatched, giving the associated Ranger an ability they can use once per round. The Black Ranger’s Mastodon Zord can immediately remove a foot soldier anywhere in Angel Grove. The Pink Ranger’s Pterodactyl Zord can add two energy tokens to a combat once per round.

After each Ranger has their Zord and the team powers up one more time, they’ll summon the Dino Megazord. This gestalt robot can be moved once per round and does one damage to every enemy card at the start of each battle. It’s a powerful ally that can mean the difference between Rita’s defeat and the Rangers’ demise.

Power Rangers: Heroes of the Grid typically gives players the first round to get a feel for combat and take out foot soldiers early to get the first Zord card into play. After that, it applies a lot of pressure. During our playthroughs, it often felt like we were doomed, as each deployment creates a great deal of tension. However, there are so many options available to players that smart strategy allowed us to overcome tough odds. It felt great to be so powerful and know that things could go sideways quickly. This creates a strong sense of high risk, high reward in each game.

With four monsters in the box and only two included in each game, there’s some variability in how each game will play out. Especially since each of them has unique tricks and tactics to confound the Rangers, so players will need to adapt quickly.

There’s also a more difficult mode that gives each combat location around Angel Grove its own attribute. In the most challenging configuration, the Command Center (the Rangers’ base) can be invaded by monsters, dialing up the pressure.

If a Ranger has no cards in their deck when they need to draw or reveal one, they’re knocked out and sent back to the Command Center. Careful card management and knowing when to retreat to the Command Center to fully heal, or use an activation token to recover some cards, is key to staying in the fight and winning the day.

What about all the other Ranger teams?

Power Rangers: Heroes of the Grid was funded via Kickstarter, which enabled Renegade Game Studios to release a number of expansions right away. There’s a box with more monsters and bosses. A Green Ranger add-on with the evil version of the character as a monster, another boss, and an additional foot soldier type. A White Ranger expansions adds that hero to the mix with more enemies, too. (Those hoping for a heroic Green Ranger set will need to wait until the Phase 2 Kickstarter late this year, as these were Kickstarter exclusives.)

There’s also an expansion based on Boom Studios’ “Shattered Grid” story arc with a new set of Rangers (HyperForce) based on an authorized tabletop RPG actual play podcast. The Hyper RPG podcast features a number of actors and characters from the Power Rangers television shows.

Renegade Game Studios has announced that Phase Two will feature the Power Rangers Zeo characters, though we’re sure there more to be revealed before and during the campaign. Those who are interested in getting the Kickstarter rewards from the first campaign will have the option to do so.

How complex is Power Rangers: Heroes of the Grid?

The variety and variability in Power Rangers: Heroes of the Grid is great for tuning the game to your younger players’ needs. However, reading is a key piece of decision-making in this game. Your non- and early readers are going to have a tough time on their own, so it might be best to pair them with (or at least sit them next to) an older child or parent.

For young players (even those that can read), we recommend playing with open hands so the older players at the table can help manage strategy. There is a lot of enthusiasm around the colorful heroes, and it’s easy for the table to get bogged down in interruptions since only one Ranger can typically act during the team’s turn.

The core concepts of the game are exceptionally approachable, though. With the right guidance, even non-readers can feel like they’re contributing and making a big difference in a pitched battle. The large dice are fun (especially if you get the colored dice pack), but a dice tower might be better for smaller hands.

This is one of the deepest collaborative games I’ve played, since it requires the team to make decisions. This can lead to the “alpha gamer” phenomenon if not careful, so it might be best to establish that the lead Ranger (the player that initiates the battle) makes the final call before Rangers play cards.

Power Rangers: Heroes of the Grid is a game that does many things, most of them quite well. The use of cards as life points is balanced by abilities that help manage the bleeding. Dice rolls are a factor in combat, but only as a result of tactical use of Ranger cards, ensuring that things don’t feel too reliant on luck. Enemies apply pressure and seem overwhelming, but the Rangers are equipped to deal with those threats.

Most importantly, Ying has created a game that almost perfectly evokes the team-based themes of the source material. My one disappointment is that the Zords and Megazord don’t reflect the huge Robot-versus-Monster battles that capped each episode of the Power Rangers television shows. Everything feels very “ground level” and doesn’t ever elevate to those climactic clashes, though having the optional Deluxe Megazord figure does help create an imposing presence on the table.

I adore this game, and I can’t wait to see where Renegade takes it with its upcoming Phase Two Kickstarter. For now, our family of Power Rangers has a host of monsters, bosses, and heroes to play through. This one will be visiting our Command Center often.