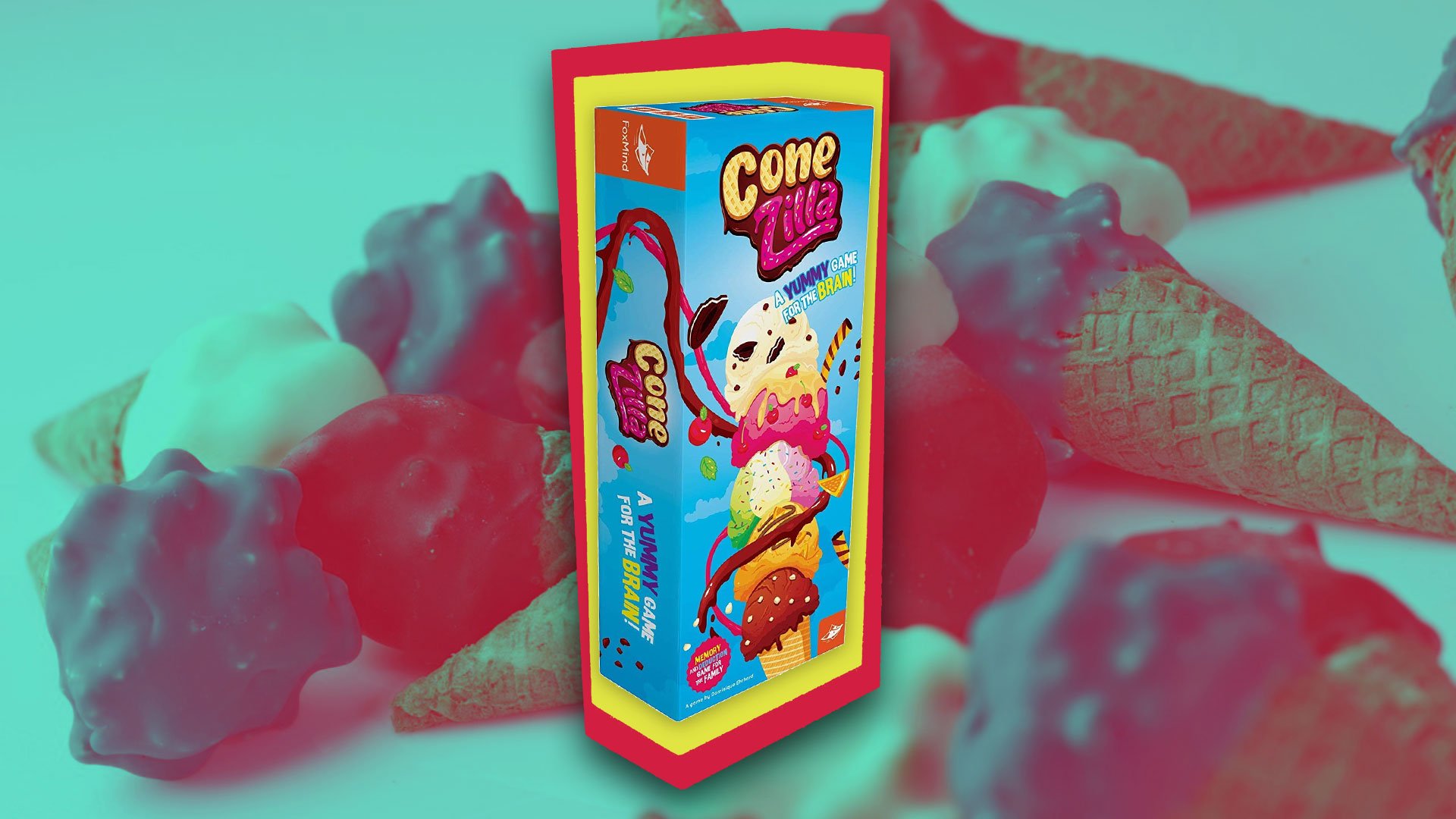 At the recent Gen Con tabletop gaming convention in Indianapolis, SuperParent had a chance to check out ConeZilla, a colorful memory and strategy game from FoxMind that’s themed around ice cream.

Appropriate for kids, the game tests memory, number recognition, and strategic thinking skills, and is also fun for older kids and adults.

ConeZilla is a bright, adorable memory game for 2-4 players aged 6+, which challenges players to be the first one to create an ice cream cone containing 10 scoops in a vertical column. Each scoop is numbered, and players can only place a scoop on top of their cone if it has a higher number than the scoop immediately below it (they can skip numbers, by, for instance, placing the “16” scoop on top of the “10” scoop, skipping 11-15).

Each player starts with an ice cream cone with a single scoop on top, labeled with the number “1.” There are 48 other scoops (modeled after various ice cream flavors, such as cookies and cream), each with a number on one side, from 2 - 49. These scoops are placed face down in the center of the play area where everyone can reach.

On each player’s turn, they flip over a scoop from the common play area and look at its number. They’ll need to decide whether to add a scoop to their cone or pass. If they decide to pass, the player must show everyone else the number and flip the scoop back over so that it once again rests face down in its original position.

Players take turns adding scoops to their cone or passing on them until someone eventually reaches 10 scoops. If no one can reach 10 scoops, the player who has the most scoops at the time of the stalemate wins.

Where does the challenge come in?

While ConeZilla has a simple premise, it’s surprisingly complex, with a lot of strategy involved. Players will need to decide if it’s worth it to add a much higher number to their cone (skipping lots of numbers in between) just for the sake of making their cone taller, or flip the scoop back over in hopes of finding a smaller number in the future.

This is compounded by the fact that everyone is allowed to see each scoop that’s flipped over, so you may need to decide whether or not to take a scoop you don’t really want (because it’s much higher than your current scoop number) just to prevent someone else from taking it.

I flip over the number “14” scoop. My opponent will definitely want that one. Should I take it, skipping the numbers between "4" and "12" that I could potentially add to my cone in the future (if I find them), or go ahead and let them take it, moving them one step closer to victory?

With so many scoops in play at the beginning of the game, ConeZilla also provides an ample test of your memory, even for adult players. This is especially true if lots of higher numbers are flipped over early on; you could potentially need to remember the locations of lots of different scoops by the end of the game.

This strategy element doesn’t make the game so challenging that younger players can’t enjoy it. Instead, it makes the game fun for older siblings or adults who may be playing the game with the youngest members of the family.

Are there any problems with the game?

Each scoop is fairly large, making them easy for little hands to grasp. However, this also means you’ll need a large area to play. For reference, a finished cone with all nine scoops on top measures roughly 17 inches tall.

ConeZilla has bright, adorable artwork that instantly draws your attention, and the game packs enough strategy and challenge to keep players coming back for more. If you’re looking for a game that can help littles grow their skills while also not feeling like work, ConeZilla is a nice place to start.

Disclosure: FoxMind provided a copy of ConeZilla to SuperParent for coverage purposes.