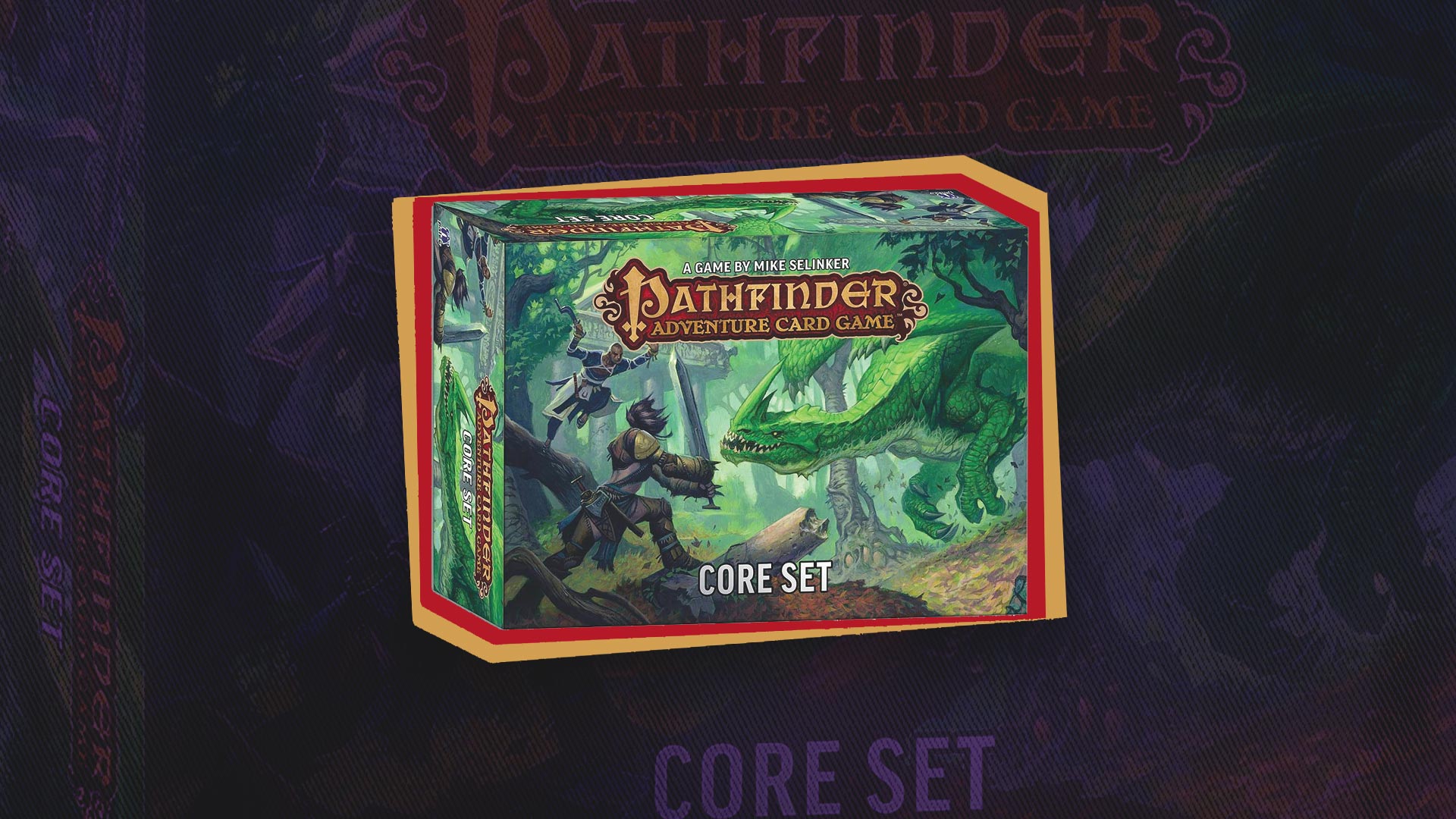 Pathfinder Adventure Card Game: Rise of the Runelords (2013) was a breath of fresh air for people who love fantasy role-playing games, but don’t have anyone willing to be the game master. The game, designed by Betrayal at House on the Hill’s Mike Selinker, was intended to translate the thrills and challenges of pen-and-paper RPGs to cards, and it got most of the way there.

The setup was smart. A base set (of which four were eventually released) kicked off the “adventure path” (Pathfinder’s terminology for campaign module). These were sold in six chapter packs with additional cards and scenarios continuing the narrative. There were also character packs that added additional archetypes and class decks for PACG’s robust organized play.

That’s a ton of product. And, with the new Core Set it all still works (with some conversion). It’s this that makes the new PACG Core Set a welcome innovation, building upon (rather than replacing) the past.

Out of the box, Pathfinder Adventure Card Game includes a three-part adventure path called “The Dragon’s Demand.” This amounts to nine different quest steps (scenarios) plus a tutorial that serves as excellent on-boarding. That’s a lot of content packed in, as the campaign is replayable with different combinations of classes for one to four players. There are 12 characters to choose from, each of which will grow as the party earns experience. Along the way, these characters will be able to improve their gear, and specialize in one of two different roles.

Every PACG game includes similar setups, with a number of locations (determined by number of players) to explore. Each of these is paired with a small deck of cards comprised of items, weapons, armor, spells, blessings, allies, barriers, and monsters.

Players are on the clock, as a deck of blessings called “the hourglass” ticks down with each new player turn. When that deck runs out, the game is over and the players have lost. This helps keep things focused, leading to about 90 minutes per play session for those that are familiar with the rules.

The goal of each game is to defeat the scenario’s villain (likely multiple times), by “closing” a number of the locations such that the big bad has nowhere to run when beaten for the final time. While the general setup is the same each time, different scenario conditions (called “dangers”), locations (each of which has its own modifiers), and henchmen change how you’ll need to play.

How is Pathfinder Adventure Card Game like a pen-and-paper RPG?

In PACG, you’ll be stepping into the boots of one of twelve different characters. There are card-sized character sheets, but we recommend printing out the free full-size versions from the Paizo website. Not only will you keep your cards intact, you’ll have more space to make notes and record the cards you add to your deck during play.

The adventure paths designed for PACG are also based on modules written for the pen-and-paper Pathfinder game. The new Core Set and its adventure paths tap into those narrative threads, creating rich scenarios in a companion storybook. Location cards featured in each quest are appropriate to the settings, and the “danger” looms over the players as a possible obstacle that could pop up during play.

Like a pen-and-paper RPG, players will need to figure out when to stick together and when to split the party. Staying in the same location allows you to close locations faster and assist each other, but it makes it more likely for the villain to escape if you happen to encounter it.

Pathfinder Adventure Card Game is not an RPG, though. It’s a board game that thematically captures the spirit of the genre, and that means it’s not quite as free-flowing as a pen-and-paper game. At the start of the game, you’ll have a deck of 15 cards. Each character has a different assortment of weapons, armor, allies, spells, and blessings befitting their class. Each represents a hit point, so if your deck is ever empty and you need to draw, you’ll die (though there is a chance to recover, as The Princess Bride taught us).

On your turn, you’ll advance the hourglass (remember, time is ticking away), move to another location, trade cards with other players who are “local” (in the same location), and explore. You get one explore action for free every turn, which means you’ll encounter the top card, read its text, and attempt to best its challenge.

All tests in PACG are resolved with the role of one or more dice from the standard RPG assortment (D4, D6, D8, D10, or D12… sorry, no D20s in this game). Each character is proficient in certain skills, like Amiri’s penchant for melee attacks and aptitude at survival. Keywords on each card, whether they are boons or banes, feature a number of these. Players pick the skill that has the best chance of succeeding, play any applicable blessings to boost the role, and see if the die result matches or beats the test value.

For a boon (item, weapon, armor, ally, or blessing), the card is acquired and goes to the player’s hand. If the test is failed, it’s discarded and out of the game. If the encounter is a bane, it’s defeated by succeeding in the test. If the roll comes up short, players will take damage by discarding cards. Thankfully, they can’t take more damage than they have cards in their hands. But with only 15 cards (and therefore 15 hit points), you’ll need to be careful.

Eventually, players will encounter either a henchman or the villain at their location. These are randomly shuffled into each location at the start, so you’ll never know where the big bad will pop up.

If it’s the villain, you’ll have the opportunity to “guard” other locations where your party members are located. If defeated, the villain will escape to a random, unguarded location on the board. If there’s nowhere left to run, the party wins the day and reaps their rewards (hero points for leveling up, a choice of better cards for their decks, or specific loot).

Each session typically concludes with the loot phase and character sheet updates before decks are stored in the box (which comes with plenty of space and dividers). The general flow is the same each time, but the locations, dangers, and villain keep things fresh.

So what’s different about the new edition of PACG?

Pathfinder Adventure Card Game Core Set is one of the best tabletop revisions I’ve played. A detailed series of blog posts on Paizo’s website goes into all the detail, but a few things stand out to us.

First, PACG Core Set is a potent reminder that language matters. Throughout the game, Lone Shark Games (under the leadership of designer Mike Selinker) went through and cleaned up the wording throughout the game. Two excellent blog posts on the subject provide numerous examples of how brevity improves clarity and flow.

Selinker and Lone Shark Games draw on their experience creating Apocrypha, a gothic horror adventure card game. While there are many differences between it and PACG, the cues the new Core Set takes in terms of language are potent. Our experiences have been much smoother with far less rules confusion (when compared to the original editions) thanks to how clean the verbiage is now.

PACG Core Set also introduces a better range of difficulty variability by tweaking the size of locations. The smaller the location, the faster it can be closed, meaning the hourglass time limit is less restrictive. This allows scaling to meet the needs of different groups and replayability with greater challenge. There are also wildcard modifiers groups can add to tweak the experience with different types of challenges.

The new edition also puts an emphasis on narrative. In the older sets, the entirety of the story was told on poker-size cards. That’s not much room to paint a word picture. Now, Core Set and adventure paths come with storybooks. This gives designers a much larger landscape to craft the world in which you’ll play.

One of our favorite things about PACG Core Set though, is that all of the old cards work. That’s four base sets and their related adventure path packs, additional character packs, twenty-seven class decks that add new variants for each class, and a handful of other card packs that add new weapons, items, spells, and more. That’s a lot of game to leave on the table, and Paizo made a great choice in carrying the older cards forward.

There is a catch, though. The conversion does take a level of fluency with the Core Set that new players won’t have. Our recommendation is that if you have some of the older PACG sets, hang onto them. They’re still good! If you haven’t picked older content up yet, hold off. There’s a lot to play in the new Core Set and there’s already one full adventure path.

Adventure paths are no longer released in six parts. Instead, they are shipped complete, in their own box, ready for integration into the spacious tray that accompanies the Core Set. This ensures that you won’t, for instance, get caught with part three of six out of stock when you’re ready to move ahead.

There sure is! “Curse of the Crimson Throne” is based on one of the earliest Pathfinder modules. Not only does it add twenty-five new quests and a bunch of higher level cards, but it also expands PACG from a maximum of four players to allow six adventurers to participate.

The adventure begins in the city of Korvosa as the party is hunting down a thug named Gaedren Lamm. From there, you’ll encounter twists and turns both political and supernatural.

“Curse of the Crimson Throne” adds new mechanics, including supporter cards that serve as NPCs upon which players can call at the new Base location. There are also two new random scenarios for additional replayability, bringing the current total to seven.

The biggest feature in the first of the new adventure paths is The Harrow. This is composed of fifty-four cards in six suits. At the start of each of the six adventures on the path, players will draw one of these Harrow cards that is theirs throughout all the quest steps. Effects throughout the adventure path play on the different suits and cards, adding another aspect of variability (and one more tool to overcome challenges).

We already loved getting PACG to the table, even if the rules weren’t quite as clean as we’d have liked. The new Core Set erases many of the quirks that detracted from our play experiences, making it the best place to start.

This isn’t going to be for everyone, though. While it does approximate a pen-and-paper RPG, nothing replaces the narrative crafting of a skilled game master and eager players. It does play on all the things we love about games like Pathfinder and Dungeons and Dragons, though. PACG Core Set delivers on the theme and narrative structure from pen-and-paper RPGs, requires significantly less preparation to get to the table, and still allows players to invest in their characters with meaningful growth (both through skills and loot).

Lone Shark Games and Paizo have refined the original experience into something truly special. If your young players can read fluently, there’s no reason not to gather them around the table for this. They may need some strategic assistance, but this is a cooperative game with well-implemented difficulty scaling. As long as one person can guide your new adventurers, there’s plenty of fun with or without the “Curse of the Crimson Throne” adventure path.

Disclosure: Review materials were provided by the publisher.