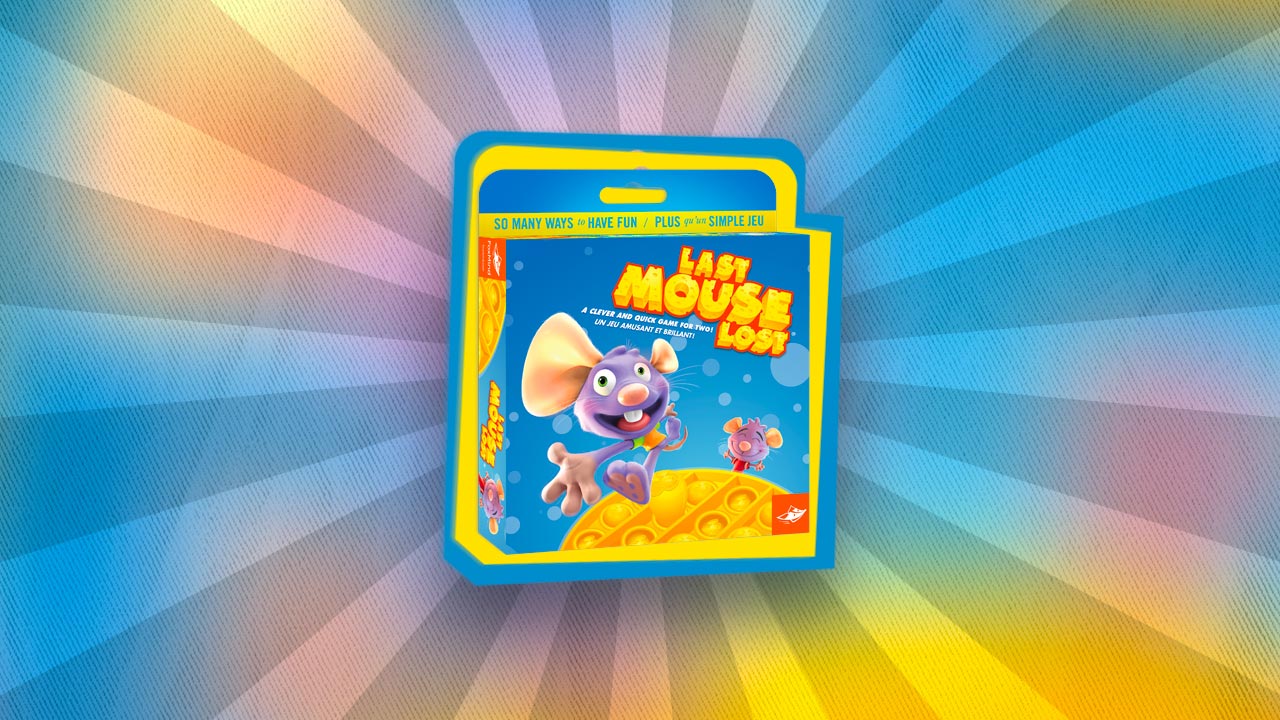 Games like Tic-Tac-Toe and Connect 4 are easy to learn but also provide a great opportunity for younger players to stretch their strategic thinking skills. Along those same lines is Last Mouse Lost from FoxMind, which is just as simple (if not simpler), but also just as rewarding.

What is Last Mouse Lost?

Last Mouse Lost is a two-player game (for ages 5+) with a basic premise: “The mice have just finished feasting and need to scurry into their holes. Don’t be the last mouse standing or you might get caught by the cat!”

How is Last Mouse Lost played?

The game has an incredibly simple design, both in terms of its rules and its actual components (or lack thereof). Its played using a yellow, silicone disc that measures roughly 5” in diameter and a little more than half an inch thick. The disc resembles a waffle, as its split into 6 horizontal rows, each of which is comprised of circular “nodes” representing individual mice.

On each player’s turn, they’re asked to press one or more mice in a single row so that they’re “hidden” from the cat. This causes the circular node to turn into a bowl shape, so it’s easy to tell which mice have been hidden, and which haven’t.

The goal is to avoid being the player who presses the last mouse, but you can change the rules a bit depending on how you want to play. That is, you can choose whether players are required to press adjacent mice in the row they select (so it looks something like X, X, O, O, where X are the mice they’ve pressed), or if they can jump around in a single row (resulting in something like X, X, O, X).

In addition, while the game technically has a “best three out of five” rule, you can stop at one or keep going as long as you want.

Regardless of the rule(s) you choose, the game starts out basic and moves quickly until only a few mice remain, at which point strategy really comes into play. Kids need to use strategic and forward-thinking to decide which mice to press, based on what they think their opponent will do next, or if they can “force” them to press the last mouse. “If I do this, will they do that?”

What makes the game so special?

Last Mouse Lost shines in its simplicity. There are no small pieces to keep track of (read: potentially lose), and you don’t even need a flat surface to play, so kids can play pretty much anywhere. For instance, they can easily pass the disc back and forth between them on a road trip so long as they keep track of which side is “up.”

Furthermore, as each mouse is pressed, kids are actually preparing themselves for the next game. As soon as the last mouse is pressed, they can simply flip the disc over and the game is ready to play again with no setup required.

Finally, since the disc is made of silicone, you don’t need to worry about it getting dirty, as it can easily be washed off with soap and water.

Last Mouse Lost is a simple game, but its simplicity is what makes it so great. It likely won’t appeal to older players and adults, but for littles, it can help them work on thinking strategically (for instance, planning multiple moves at once), which is a skill they can take with them into more complex games as they grow up.