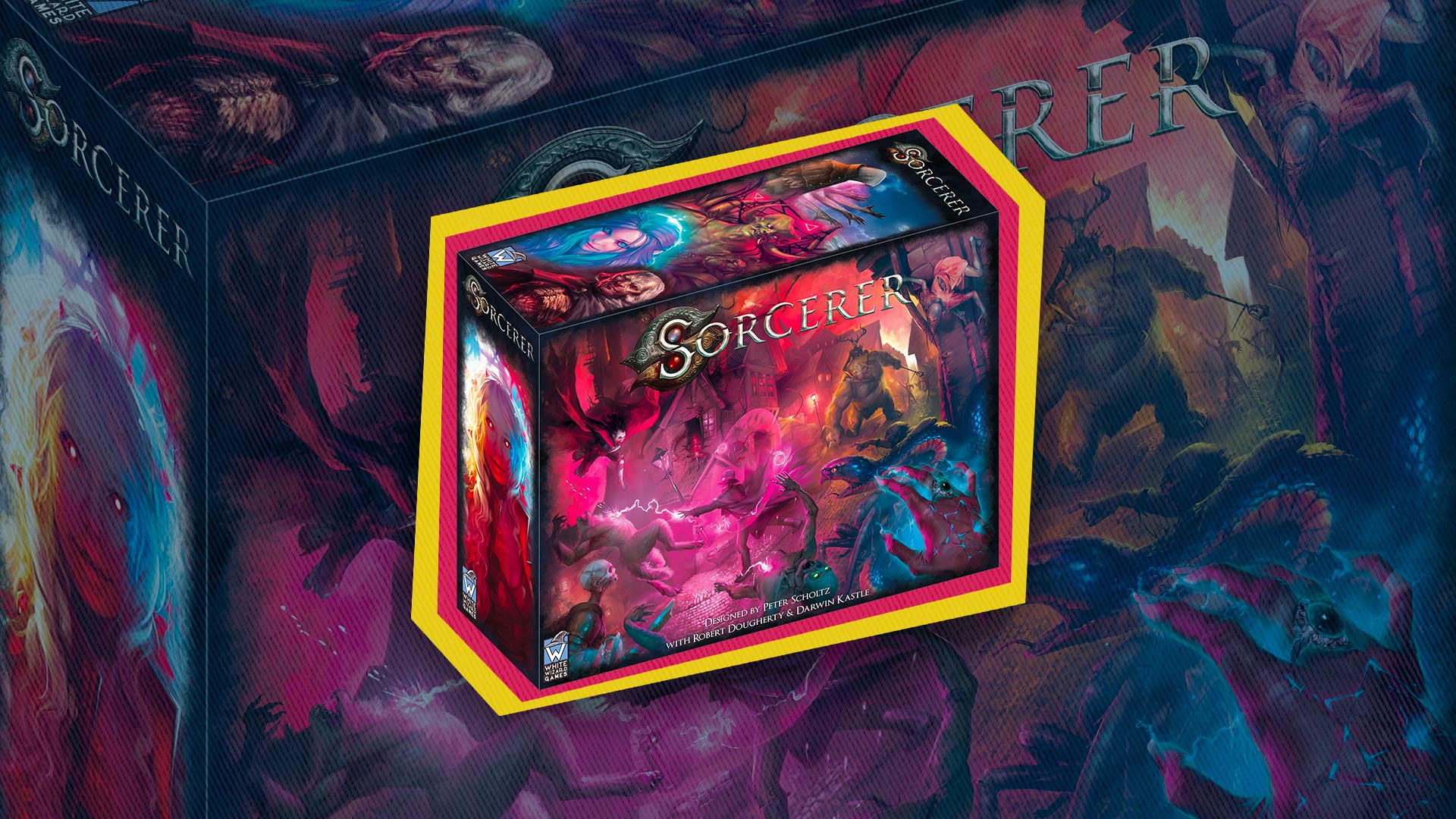 White Wizard has been behind some of the best deck-building games in recent years, with the pocket-sized Hero Realms (featured in our 2018 Holiday Gift Guide) and Star Realms. Company founder Rob Dougherty, a Magic: The Gathering Hall of Fame inductee, has infused a bit of Magic’s flare into all of the company’s games. Sorcerer is no different.

Players take on the role of one of four different sorcerers in the base game, each with their own special powers, seeking to dominate their rivals and take control of two of the three territories to win the day.

Unlike Hero Realms and Star Realms, Sorcerer isn’t a deck-building game. It’s a deck-drafting game. Instead of slowly building your deck and becoming more powerful throughout the course of play, you’ll begin with a complete grimoire of cards.

The grimoire isn’t determined just by the sorcerer you select. You’ll also take turns with your opponents choosing a lineage and a domain. Each features a different set of minions and spells, as well as a unique playstyle. The result is that you’ll have a complete deck of 40 cards after the drafting phase.

For instance, in one game you might play as Miselda (your sorcerer) the Animist (your lineage) of the Forgotten Temple (your domain). This combination gives you access to Miselda’s abilities to manipulate opponents’ minions, the Animist’s spiders that can steal opponents’ cards, and the Forgotten Temple’s focus on making opponents discard. In another game, you might assemble Miselda the Blood Lord of the Screaming Coast. In this configuration, you’ll have Miselda’s skills plus vampires, blood magic, direct damage, and the ability to weaken enemy minions at your disposal.

Unlike many card combat games, Sorcerer isn’t focused on reducing your opponents’ life points to zero. Instead, your minions will attack your foes’ creatures in one of three locations. Any damage not absorbed by opposing minions increases your control of that location. The first player to reach 12 control points in a location claims it. The goal is to dominate two of the three locations before your opponent can do so. Once a battlefield is taken, control cannot be further contested.

Rounds in Sorcerer take place across multiple phases. First, players will move their character to one of the three locations (some powers can only be used in the district your sorcerer occupies for that round). Then, opponents take six alternating turns to increase their available power, draw new cards, summon minions, play spells, and move creatures to another location.

After both players (or teams) have taken all six of their actions, battle commences. Players alternate attack and defense one location at a time, choosing which minions to activate.

A minion’s power guides how many dice are rolled to determine hits. Omen tokens, which are earned in a variety of ways, can be used to either re-roll your own dice or force your opponent to re-roll. Strategic use of omen tokens can mean the difference between success and failure.

Team and battle royale options offer additional ways to play, but Sorcerer is a perfect 1v1 game you can set up and play quickly.

How complex is Sorcerer?

Sorcerer provides some of the same enjoyment as a traditional collectible card game like Magic: The Gathering and games like Hero Realms. Thankfully, it doesn’t include the complexity of from-scratch CCG deck creation or the sometimes haphazard results when playing deck-builders. Throughout a number of plays, it didn’t seem like there were any overpowered deck combinations, which is a testament to White Wizard’s efforts to balance the game.

Sorcerer does require extensive reading, but given the gothic horror themes, this is a better choice for teens anyway. There are a couple of easily overlooked rules you might get wrong the first time, but after a couple of plays, turns move quickly and games easily fit within White Wizard’s suggested 60-minute play time.

Some of Sorcerer’s complexity comes from its greatest strength: variability. With so many choices to combine sorcerer, lineage, and domain right out of the box, you’ll discover interesting card interactions throughout your play sessions. You’ll also have a harder time keeping track of your opponent’s abilities since cards are not duplicated from one deck to the next.

This isn’t the best choice for your first card combat game, but if you’ve played deck-builders with direct player interaction (Hero Realms and Puzzle Strike are great examples) or traditional collectible card games, you should be set.

What about the subject matter?

We want to call out that unlike many of the games we cover here at SuperParent, Sorcerer isn’t for all ages. There’s a hefty amount of blood featured in the card art, creepy monsters abound, and there are some suggestive (though not outright sexual) poses. This is all right at home in a gothic horror setting, but it might not be the best fit for your family. As always, we encourage parents to use their discretion before bringing a game to the table.

Sorcerer is a wonderful blend of genres that offers a great deal of customization and variability. It subverts the standard “reduce your opponent’s life to zero” goal of many card combat games, which in turn creates interesting risk-vs-reward choices at each battlefield.

Is it worth fighting for a battlefield you’re losing, or are you better off committing resources to reinforcing the other two? Should you sacrifice your minion now or allow the battlefield to take damage so you can strike back later?

With the first wave of expansions arriving later this year (and, given White Wizard’s track record, more coming), Sorcerer has the potential to become more engaging as it grows over time. It’s easy to get back to the table, but just be sure the subject matter is within your comfort zone when playing with younger players.