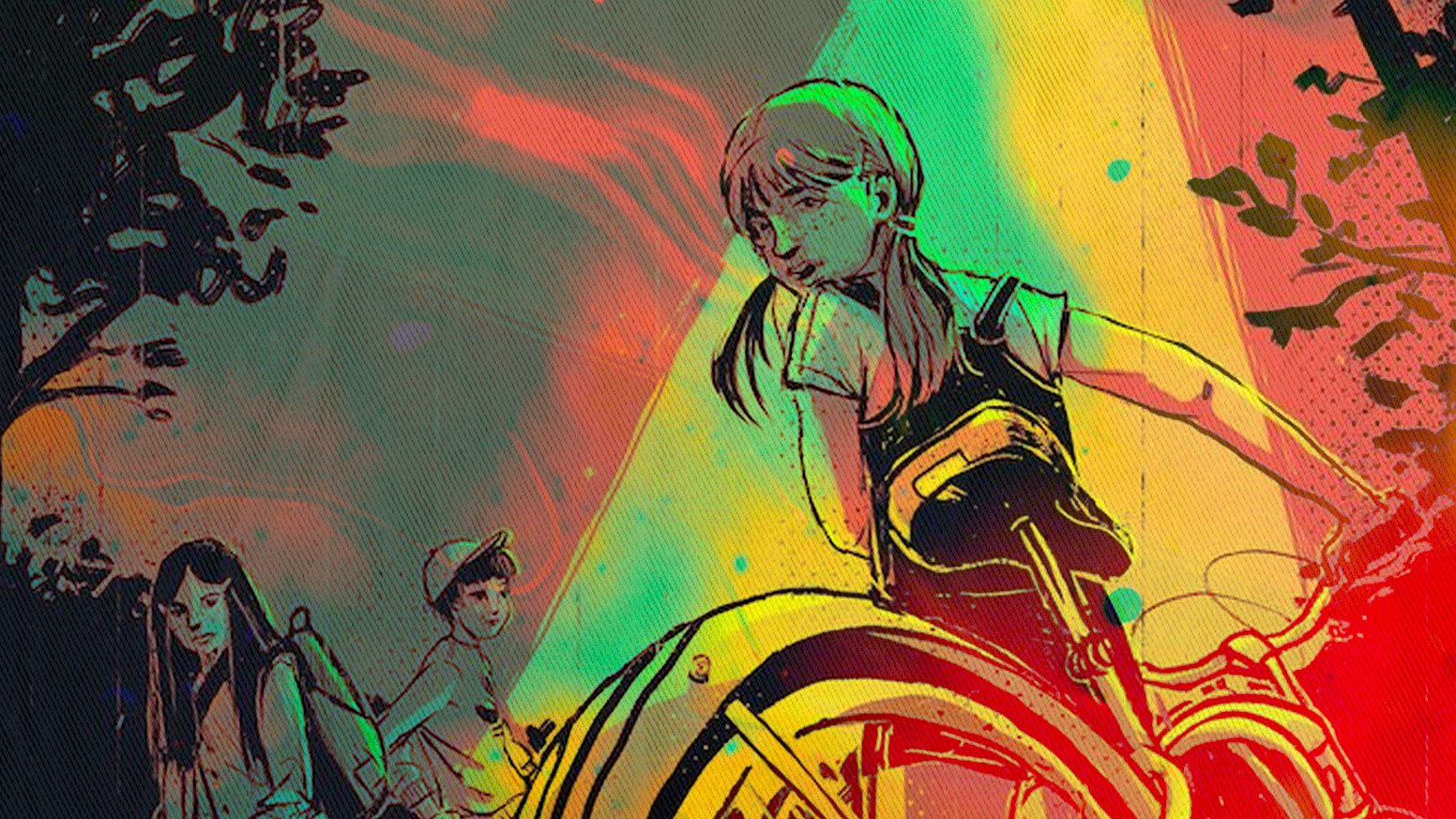 Kids on Bikes continues to be one of the most approachable pen-and-paper tabletop games available to play.

As we discussed in our review, its theme is strongly tied to Netflix’s Stranger Things, movies like E.T. and The Goonies, and television shows like Eerie, Indiana. Renegade Games-published Kids on Bikes teamed up with PAX Unplugged to host a Stranger Things-themed event at Philadelphia’s Thirsty Dice Cafe, complete with an appearance from the game's co-creator Doug Levandowski. The night included a mini-panel with Levandowski, two-hour game session, and screening of Stranger Things 3’s first episode.

Levandowski discussed how he and creative partner Jonathan Gilmour came to team up as the two both fell in love with the first season of Stranger Things. The duo started planning out a game officially tied to Netflix’s series, but opted for original IP for licensing purposes.

“We started doing this and we eventually decided to separate the two... and open it up to be other things and other possibilities like E.T., or Goonies, or Gremlins, somebody pointed out recently would work really well,” Levandowski said. “We worked on that for a while and we expected to run a Kickstarter ourselves and, ‘Holy crap, it would be amazing if the goal was $15,000 on the Kickstarter.’ It did better than that... and it has just exceeded all of my wildest expectations. There are podcasts about it now.”

One such podcast, The Bike Brigade, had members in attendance at the event. SuperParent Editor-in-Chief, Amanda Farough, and I were fortunate enough to get teamed up with them for our play session (more on that later!).

Kids on Bikes is the first in a series of pen and paper roleplaying games that will use the same system in different settings. The next, Teens in Space, is due for release at Gen Con. A third setting is in the works right now, but Levandowski was mum on the name.

Kids on Bikes went a different way, paying homage to Dungeons & Dragons without adhering too closely. The result is a game of collaborative storytelling that makes use of the RPG dice in innovative ways that support the story rather than focus primarily on combat.

When we sit down at the table to play, our party of seven pulled from a stack of character tropes. These are like pre-generated character sheets that come with Dungeons & Dragons starter kits, but focus on stats and skills rather than the important narrative components.

As we discussed in our review, one of Kids on Bikes’ most endearing aspects is the collaborative world-building. The first step was defining boundaries. The Kids on Bikes manual offers a section on inclusion and diversity. Levandowski added to that in our game, ensuring that there was a measure of safety in the interactions (especially since we all didn’t know one another). We discussed off-limits topics (like self-harm) and built in a mechanism for players to signal if the narrative was becoming uncomfortable. Role-playing requires trust, and these were ways to ensure players could feel safe letting their guard down. We also collectively decided how serious we wanted our game to be (spoiler: humor was encouraged).

Given that we were playing a one-off session, Levandowski as game master abbreviated the character creation process. Each of us answered two questions (determined by the roll of a 20-sided die and a list in the game manual) and got to define how we were connected with one other player.

Amanda and I were both playing as kids (rather than teens or adults) and were dating at age 12 and 13 respectively. Bike Brigade’s James Anderson (who plays Mary Sue on the podcast) was my brother, “Bruiser.” After defining our relationships, we went around the table to discuss the town of Two Rivers, PA, and its defining features (an abandoned mine, a secret room in the Shriners building, and a large cow sculpture were just a few). Then, we each shared a rumor heard around town.

There was something strange about the mayor.

A secret tunnel was hidden under the cow sculpture.

There’s something living in the abandoned mine.

From there, we began our tale. The group started off scattered around town. Amanda’s character, a 12-year-old nature-loving scout named “Mandy,” and “Emma,” a young science whiz, were in the woods investigating something strange in the creek. My character, a funny sidekick named “Mikey," and “Bruiser” were at the town music store with a local woman named “Tallulah.” Our teenage cheer queen, “Jennifer” (played by Bike Brigade’s Erin King), was trying to whip her squad into shape before the summer, while her parent, “Ash” (played by Bike Brigade’s Daniel Spencer), nervously watched a storm roll in.

The group came together quickly thanks to some deft narrative nudging by Levandowski. As we all met up in town, the mayor aimlessly shambled toward the Shriners building. Thunder clapped loudly in the sky, as we each heard a word spoken in the boom. Levandowski frequently had us rolling checks against our different stats.

In Kids on Bikes, each stat is assigned one of the six types of polyhedral dice. The more sides on the assigned die, the better you are presumed to be in that stat. For example, rolling a D4 for “Brains” is unlikely to produce as good of results as a D12 or D20. However, rolling the max value on a die allows it to “explode,” giving you another roll you can add to the first’s value.

Failing a roll is rarely severe. Players are awarded an “adversity token” for failing, which can be cashed in later to augment rolls or activate skills.

With a storm rolling in, the entire party of seven piled into Ash’s station wagon. It was decided we would accompany them home for dinner. The group vetoed liver and onions and convinced Ash to boil hot dogs. Success!

Once back at their house, Jennifer (in the “plastic princess” trope) stormed up to her room. There she encountered a young girl who suddenly appeared out of thin air.

K (short for Kaylee) was our group’s “powered character.” Kids on Bikes features an optional add-on deck of cards for implementing a powered character like Stranger Things’ Eleven. The GM chooses traits and skills from the deck at the start of the game and, when that character is introduced to the story, hands out one or two of the aspects to each player.

Players can then use adversity tokens and roll to attempt to take control of the powered character by activating their assigned aspects. In our game, K had the ability to manifest tangible illusions, vanish, and teleport over short ranges.

When players successfully roll to activate their powered character aspect, they temporarily also roleplay as that character instead of their regular one. Through interaction with K, we also got to learn more about some of our party’s characters. Mikey and Bruiser like to joke, Mandy is triggered by yelling because of her mom’s new boyfriend, and Ash is overprotective.

The sudden appearance of K in Jennifer’s room led to surprise and shouting. The group finally got the young girl downstairs after she passed out after startling Jennifer.

In the course of our game, Mandy hid under the table to avoid the yelling and found herself suddenly face to face with a scared K. As the two chatted, Mandy revealed to K why she was hiding and that “boyfriends are a pain.” As Mikey, I went to check on Mandy and found K (controlled by James at the time), who asked me, “Are you a boyfriend?”

Saying “yes” was tantamount to Ghostbusters’ Ray Stanz conjuring the image of the Stay Puft Marshmallow man as the form of Gozer. K uttered “boyfriends are pain” and summoned a tangible illusion of a lumbering, menacing, sentient jar of mayonnaise. In a moment of art imitating life, Mikey shared my visceral disdain for the gloppy white substance.

After a brief scuffle with Bruiser, the mayo jar (which we eventually named “Slorpy”) was defeated. However, our time had nearly come to a close. K started to fade out of existence. Most of us failed grit rolls and passed out. Mandy managed to keep her eyes open long enough to watch us all hit the floor and fade out of existence, too. She followed shortly after.

The story closed with Levandowski cutting away to the mayor in the secret room of the Shriners building deeming the experiment a failure and suggesting that they try again. It was a satisfying close to an evening filled with humor, intrigue, and clever relationship building.

Playing narrative-heavy role-playing games with strangers can be intimidating. Levandowski expertly navigated our large group through the story that we, as players, helped craft. The experience of those at the table, including our new friends from the Bike Brigade podcast and experienced Kids on Bikes GM Matt Moore (who played “Tallulah”), helped ease those of us newer to the game into the experience.

Kids on Bikes is a great entry to tabletop gaming, with a flexible ruleset that can be adapted to different geographic settings and time periods. The stat system gives game masters flexibility to focus on narrative and let players shape the experience while still creating a throughline. From a parenting perspective, even our littlest player (who is six years old) had no problem when we got our own story to the table. And it’s ok if you aren’t terribly creative. The first Kids on Bikes module book, called Strange Adventures Volume 1, includes nearly two dozen settings, story setups, NPC suggestions, powered character recommendations, and more.

We’re looking forward to checking out Teens in Space when it comes out (complete with a deck of cards to give players control over their ship, much like Kids on Bikes’ powered character). Look for that after Gen Con in August.