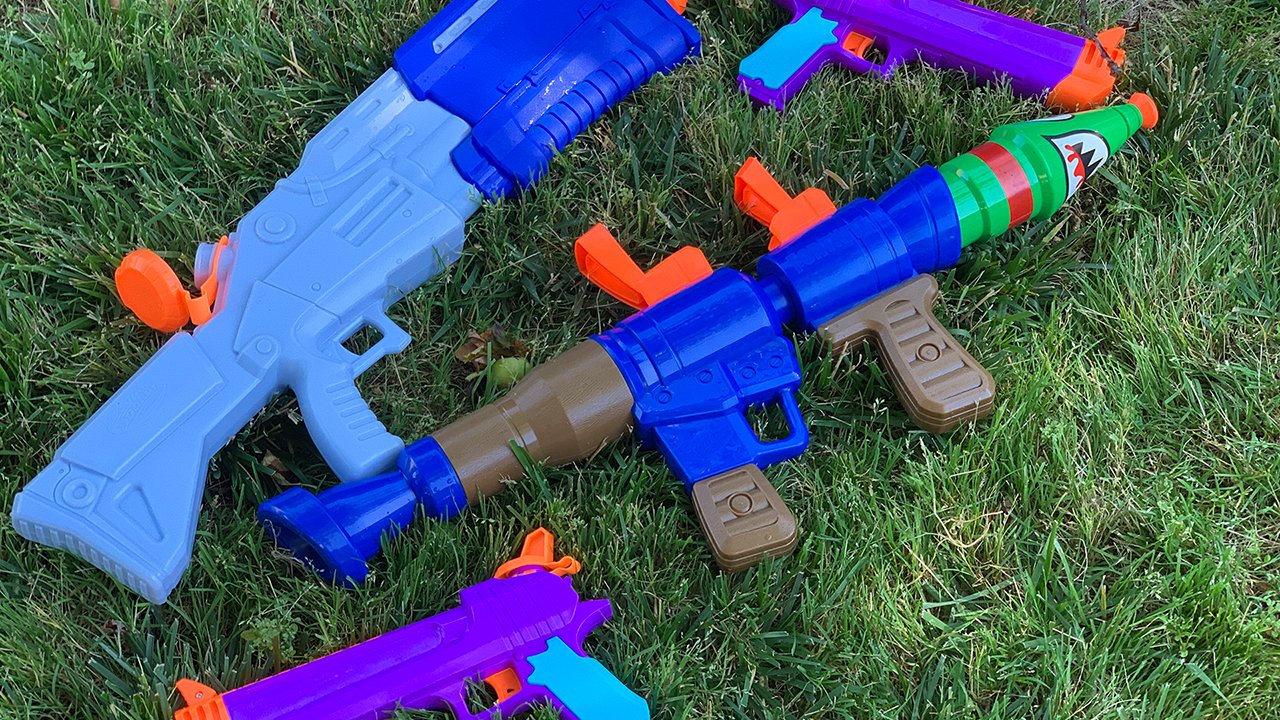 I just got blasted, point blank with a Fortnite RL. Dual-pistoled, John Wick style, by a pair of HC-E hand cannons. After all that, hosed down by a couple rounds from a TS-R Fortnite rifle. Ask your kid to help test out Fortnite’s lineup of Super Soaker water pistols, this is what you get. The cold-hearted cynic saw the news of Fortnite x Nerf-branded Super Soakers and thought it’s pretty obvious that these designs are riffing off what is readily available. You’re paying for the Fortnite style (and branding). Unique angles. Loud, bright colors. Is it worth it, though? Who is gonna actually buy this licensed stuff?

The answer: Us. After all, we needed to rearm for the coming summer, anyhow. So, in this highly unscientific study, I volunteered as target dummy while getting pelted by round after round of water in 100-degree heat. Each of the three Fortnite firearms are getting graded on how they are built and how they perform considering the asking price. What you do with that information for the Fortnite fan in your life is entirely up to you.

Build: This is solidly built and probably the most standout piece of water weaponry in the line. The distinctive rocket launcher design looks ripped straight out of a match, but operates like a glorified syringe. Stick the mouth of the RL in a bucket (or whatever) and pull back the hand grip. It extends the length of the RL. If you want, look down the sights on top, but its accuracy varies depending on how hard you pull.

Blast: It’s got the longest range of the bunch (we didn’t measure precisely, but figure a solid 20 foot range). If you’re shot, up close, you’re definitely gonna feel the 9.3-ounce payload.

Build: One thing that the TS-R has over the RL is the fact that you can keep on blasting your buddies thanks to the larger tank. The majority of the body holds a full 36 ounces (1 Liter) of H2O. The only real moving part here is the pump mechanism hand grip that sits underneath the barrel. Like the RL, it feels sturdy enough in the hand. The only thing screaming “Fortnite” besides the logo on it: the distinct jagged barrel. And we’re totally OK with that.

Blast: Think of this as a medium-range water weapon. You can reliably get someone up to about eight-to-10 feet away before the water breaks apart into a light shower blast.

Build: We’re not going to lie, we had a natural bias toward this one. We loved the design and eye-popping colors of the HC-E. You put it in your hand and it feels meaty…dual wield with two pistols and you feel ready to take on the world in neon style. Then we filled it up with water and tried firing it. The party was over. The pistols use a sub-standard finger-trigger pump mechanism that functions, but the short range and wimpy results aren’t worth the extra money.

Blast: You ever feel a light sprinkle of rain, hold out your hand, shrug, and say, “whatever?” That’s what this feels like. It effectively reaches maybe four feet.

Rating: One out of Four Llama heads

My work is done here. Now, excuse me while I towel off.