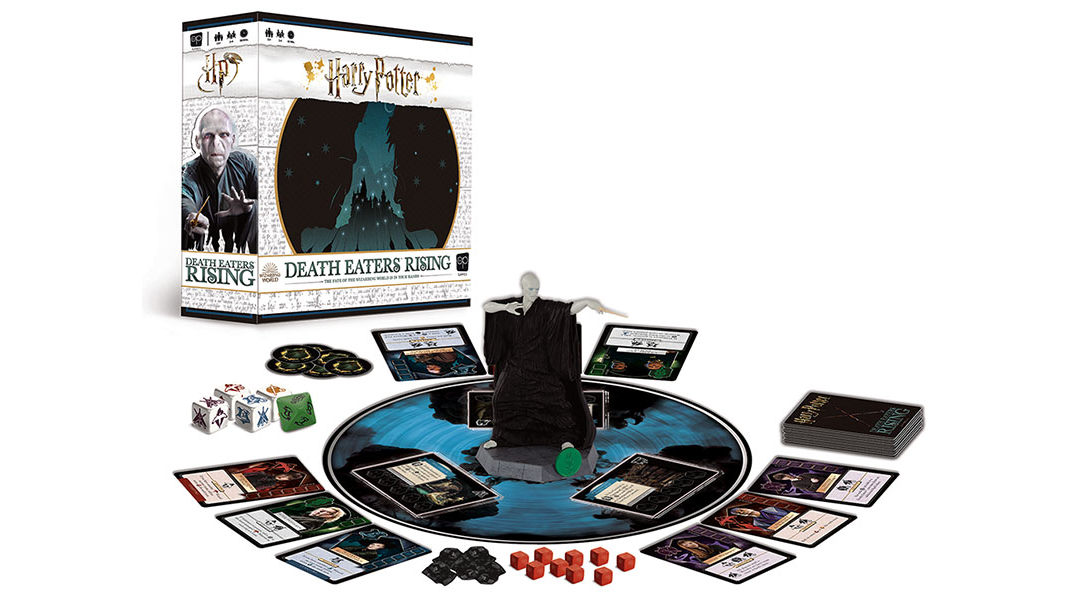 From the launch of Harry Potter: Wizards Unite on mobile to the debut of Hagrid’s Magical Creatures Motorbike Adventure at Universal’s Islands of Adventure, the Harry Potter franchise is having a moment right now. And fans of the Wizarding World will soon be able to celebrate this classic franchise in a new way, with an upcoming tabletop game from USAopoly (The OP).

Harry Potter: Death Eaters Rising is a card and dice game that will allow 2-4 players aged 11 and older to work together to stop the plans of Lord Voldemort and his Death Eaters. The game is based on the fifth film in the Harry Potter franchise, Harry Potter and the Order of the Phoenix.

While the game asks everyone to work together to achieve a common goal, each player will be able to create teams of wizards and witches using characters from the Order of the Phoenix, Dumbledore’s Army, and Hogwarts.

Specifically, players will begin with either Harry or Hermione from Dumbledore’s Army, Minerva McGonagall or Albus Dumbledore from Hogwarts, or Nymphadora Tonks or Sirius Black from the Order of the Phoenix. From there, they can recruit additional characters to their teams and work together with the other players to defeat Dark Wizards like Peter Pettrigrew, Bellatrix Lestrange, and Lucius Malfoy in a fight for control of locations like the Ministry of Magic, Diagon Alley, and Hogsmeade Village.

Once players take out the Death Eaters, they’ll have the chance to take on He-Who-Must-Not-Be-Named himself.

Each game of Harry Potter: Death Eaters Rising has an estimated length of 45-60 minutes. The game will be released this fall for $49.95.