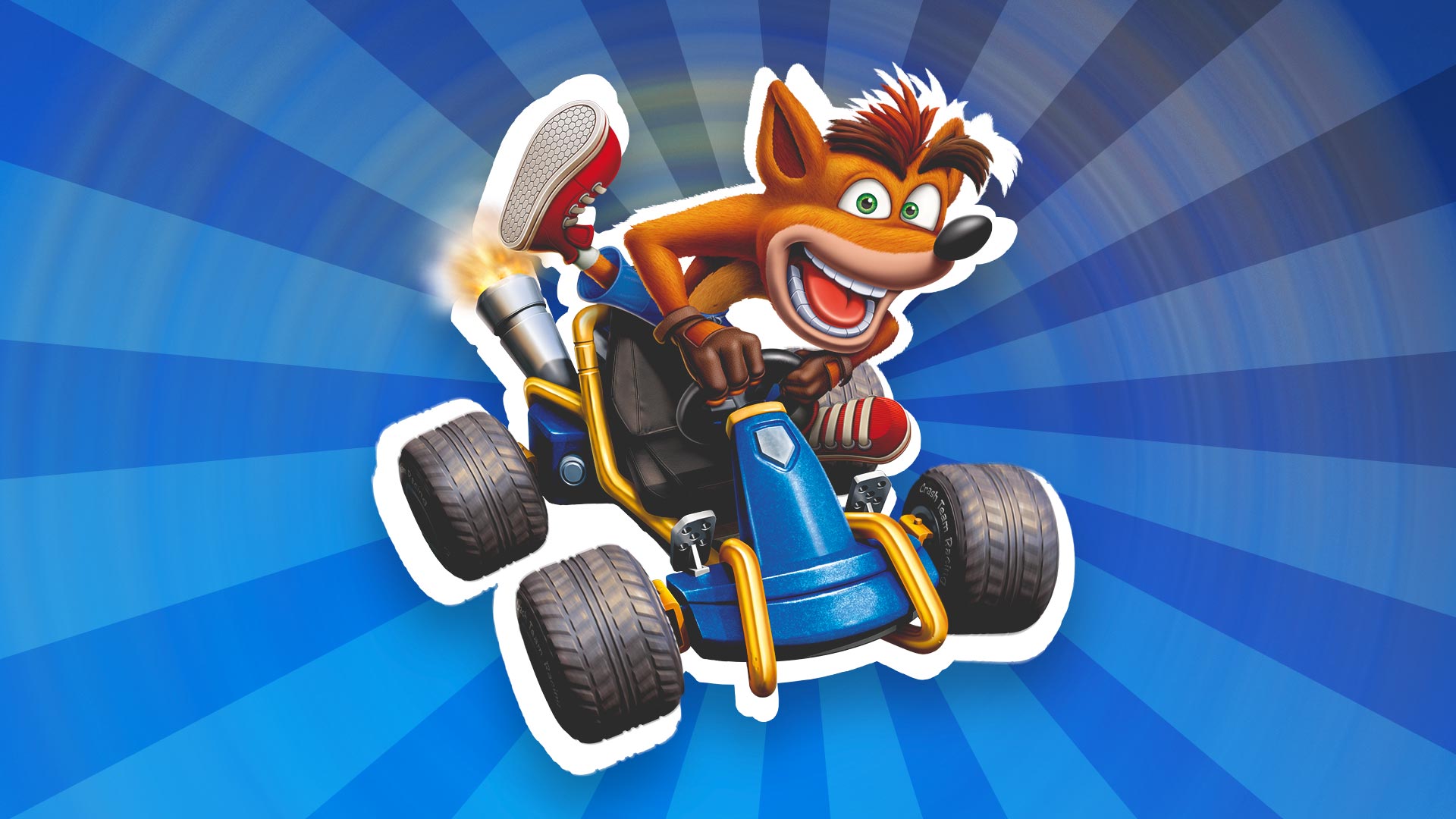 While the game is part of the Crash Bandicoot franchise, it does away with the series’ skill-based platforming and replaces it with chaotic kart racing that’s fun for the whole family.

In Crash Team Racing: Nitro-Fueled, players must help Crash Bandicoot, Dr. Cortex, and other heroes and villains from the franchise save their planet from the evil Nitros Oxide, who wants to turn their world into a massive parking lot. Oxide challenges Crash and the gang to pick the best racer they have to challenge him in a race for the fate of the planet.

In the game’s Adventure mode, players will need to come in first place across 16 different tracks and four boss races to earn the right to face Oxide and save the world.

If your family has played any Mario Kart games, then Crash Team Racing: Nitro-Fueled will feel pretty familiar. In each "normal" three-lap race, players compete against seven computer-controlled characters. They can drive through item boxes scattered around each track to pick up offensive and defensive items, such as bombs, missiles, and shields, that can help them take the lead (and then keep it).

In addition to normal races, each track has two additional challenges to complete. The CTR Challenge asks players to collect the letters C, T, and R by driving into them while racing, and then also come in first place. The Relic Race, meanwhile, pits players against the clock. It removes the other drivers and item boxes and asks players to complete the three laps as fast as they can by driving into yellow boxes that stop the clock for one, two, or three seconds at a time.

Finally, Adventure Mode also features Crystal Challenges, which test players’ skills in arenas, asking them to collect 20 crystals by driving into them before time runs out. Four race Cups and some bonus tracks are also unlocked in the late game.

For Crash Team Racing: Nitro-Fueled, there are actually two versions of Adventure Mode to choose from and complete. The “Classic” version is the experience fans of the original game will remember, while the “Nitro Fueled” version adds in extra features, including the ability to change to a different character between races, the ability to choose from three difficulty settings at the beginning of the adventure, and the ability to customize the look of each driver and kart (players unlock a variety of customization options as they progress, and can purchase even more using the coins they earn as they play).

For both versions of Adventure Mode, players can choose from eight drivers to begin the game (more characters are unlocked over time). Each character has their own stats for speed, acceleration, and turn, so players can pick the character that best matches their preferred racing style. For instance, Polar and Pura have the best handling of the original eight characters, at the expense of having a lower top speed. On the other hand, Tiny Tiger and Dingodile have the best speed stat, but the worst handling, and so on.

Having the ability to change between these characters on the fly in the Nitro-Fueled Adventure mode is a great addition, as it can help newcomers get a feel for each racer and choose the one that suits them best.

The three difficulty settings are also a welcome addition, but they’re not perfect. The default Medium difficulty offers a challenge, even for adults, but the Easy mode goes too far in making the game a cakewalk (we consistently finished races with a half-lap lead over the rest of the pack). We would’ve liked to see a difficulty setting between these two options, for players who want a bit of a challenge, but also aren’t interested in retrying a race 5+ times just to come out on top.

While the premise is simple -- finish in first place by any means necessary -- there’s actually a lot of depth to the racing. For one, players can drift around corners, and if they press a button at the correct time while drifting, they’ll receive a temporary speed boost. With the proper timing, three of these boosts can be chained together to trigger an even larger one. Racers can also hop over hills and off of large jumps, and if they do, they’ll earn a speed boost when they land.

Items can also be used strategically to increase their effectiveness. For instance, players can toss certain items (like potions and bombs) both forward and backwards from their kart, depending on where the other drivers are on the track. (Fair warning: if you’re the type that inadvertently pushes up on the left analog stick while steering left and right, you may accidentally toss an object in front of you that you meant to throw behind you.)

The game could do a better job of teaching players these sorts of “skills.” It includes a few tutorial cutscenes that teach players the basics, but other information is either only included on the game’s loading screens (which players may not read), or in a few short tutorial videos that can be missed in the game’s menus.

Is there anything else to do, other than Adventure Mode?

Tons, actually. Outside of Adventure Mode, players can practice their skills in a variety of Local Arcade modes: Single Races, four race Cups, Battles (modes like Capture the Flag, Last Kart Driving, and more), CTR Challenges, Relic Races, Time Trials, and Crystal Challenges. Depending on the mode, racers can compete on their own or against other players in the same room.

Drivers can also compete against other players online, but we had trouble finding seven other players to fill our matches. Matches can still be completed with less than eight players, but it’s not an ideal experience.

This all sounds pretty chaotic. Is this game appropriate for kids?

Crash Team Racing: Nitro-Fueled is rated E10+ by the ESRB, but with the Easy difficulty setting being so skewed in favor of the player, we’re confident that younger kids can also enjoy the game.

That being said, we’d like to see more in-depth tutorials available for newcomers, as the video tutorials we referenced earlier don’t cover things like the game’s multiplayer Battle modes. Granted, the gameplay isn’t so complicated that players can’t quickly figure out what’s going on by simply playing, but we’re fans of more information, rather than less.

Crash Team Racing: Nitro-Fueled is a joy from the moment you hit the track. The "Nitro-Fueled" improvements, like the difficulty settings and ability to change characters mid-game, make the experience more accessible for newcomers and younger players alike.

The huge difference between the Easy and Medium difficulty settings leaves something to be desired, but having such an “easy” mode does more to ensure younger players can enjoy the game just like the adults.

Whether you played the original Crash Team Racing or you’re getting behind the wheel for the first time, Crash Team Racing: Nitro-Fueled is a fun and frantic experience that’s definitely worth picking up.

Crash Team Racing: Nitro-Fueled is out now on PlayStation 4, Xbox One, and Switch.