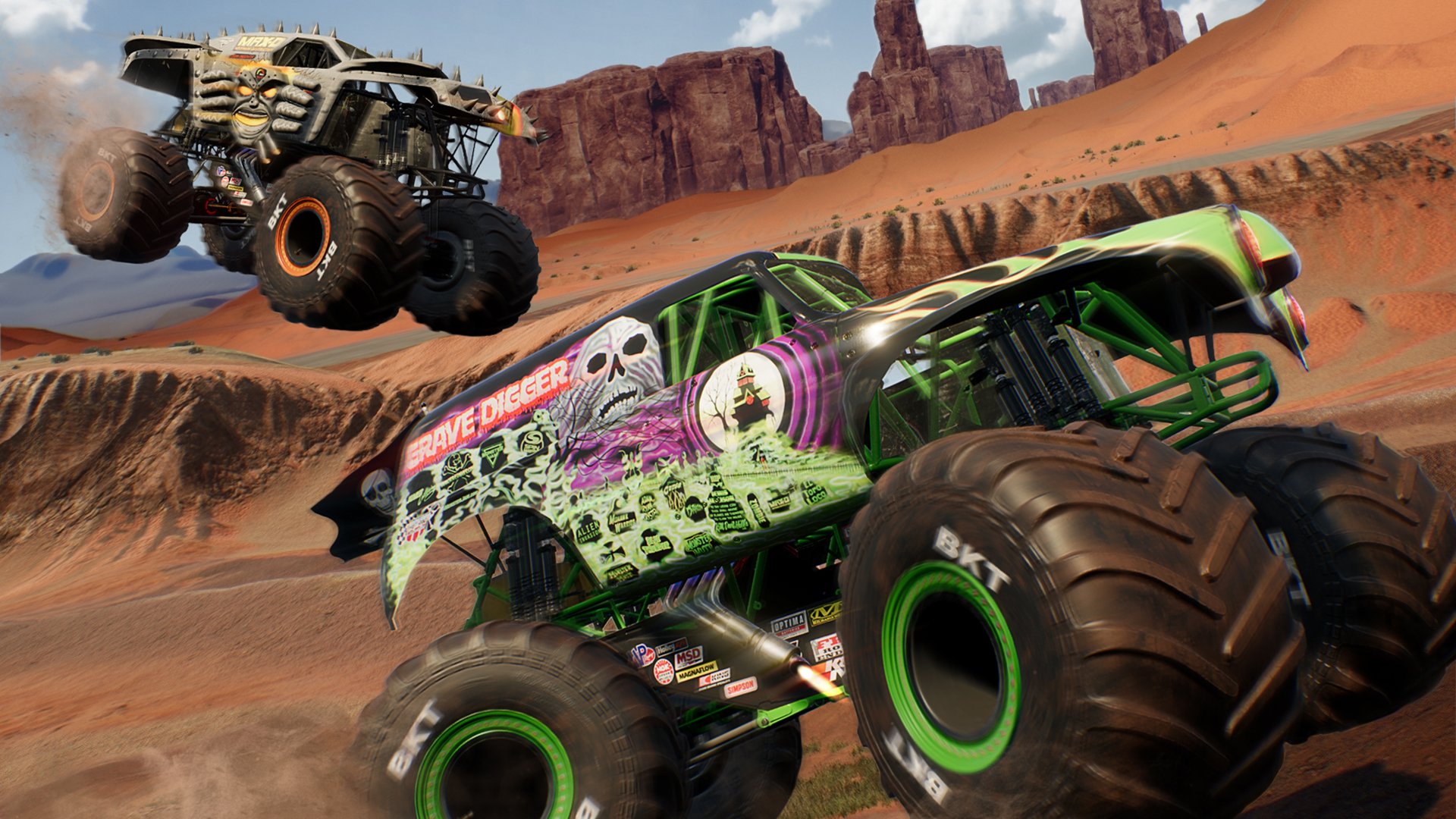 Behind the wheel of Monster Energy, driver Todd DeLuc pulls off sick jumps on the Monster Jam circuit. The only difference between you and him is that in Monster Jam Steel Titans, you can jump off of plane fuselages and drive all over the world. Well, that, and you’re not getting any bumps or bruises while playing.

Whether you’ve hauled your family to see monster trucks crush competition or you’re new to the sport, Monster Jam Steel Titans takes you one place you’ve never gone before with these goliaths: the open road. The new game is built around freedom. Want to explore? Would you rather quickly jump into classic arena events? Done. The developers at Rainbow Studios built a unique racing game with you (and your kids) in mind.

From the start, you’re transported to Monster Jam University. This isn’t something slapped together for the sake of a game, it’s based upon a real location where expert drivers drill from sunup to sun down. It’s where you’ll get your basic training… or, if you choose, a place to play around. No menus, no nonsense. Just mash the gas pedal and go.

Misty Parnell, Senior Artist at Rainbow Studios, explains that, “Watching the trucks move, race, and stunt their way through the stadium and arena layouts at the actual Monster Jam University was amazing! Seeing what the trucks were capable of, inspired us to put these trucks in a world that would really compliment their power and agility.”

As a result, instant accessibility became a big part of the game’s design. At a button press, you can quickly jump to any event type in the game – from Freestyles stunts and races to driving through a monster truck-ready world.

Monster Jam University feels like an open playground. Practice flips and power slides to get a feel for the unique handling of the trucks. Chris Baranowski, Senior Technical Animator, fires up that Free Ride mode in Monster Jam Steel Titans and it, “reminds me of playing with toy cars or Tonka trucks in the sandbox with my kids.”

And this is one big, varied sandbox. As you progress through the career mode, that sandbox continues opening more areas to explore. It’s a lot of virtual ground to cover. “I love exploring and taking the truck to places you’d never expect, then jumping it across a valley like Evel Knievel or Travis Pastrana,” Parnell adds.

Here’s one example: Making your way to the airfield, you can drive up the ramp of an airplane fuselage, punch through the roof and pull off a sick jump landing on the broken wing of another jumbo jet.

As over the top as the moves may seem, what you see in Monster Jam Steel Titans aren’t scripted animations. They are based off a physics system that simulates the real world. Stunts, racing, using a power out to get yourself back upright – everything you see happen in the game is what you could actually see at the arena.

That covers what could happen to your ride as well, for that matter. An axle can break (though quickly repaired with some button mashing). Side panels can – and will – get sheared off. But it’s not just the trucks that get impacted – the way that you drive carves into the dirt, potentially affecting the track, which means that your race lines can change.

On your drive back to Monster Jam University, you’ll quickly realize that there’s more to Monster Jam Steel Titans than just some stunt park. That starting area is also loaded with tests and tutorials, teaching you how to handle these beasts.

“For example,” Erik Leppenan (Monster Jam Steel Titans’ Lead Designer) says, “If you want to perform stunts in Monster Jam Steel Titans, just do what the drivers do in real life.” To perform a Slap Wheelie, jump an obstacle at medium speed, land on your rear tires, then as your front tires hit the ground and bounce up, get on the gas and let the torque pull your front end up into a wheelie.

We could take Erik’s word for it, but we asked a couple of the drivers on the Monster Jam circuit what they think of the game.

“The realness comes at you in several ways,” Todd LeDuc notes. “The throttle control, the different driving angles, and balance points! The limited visibility driving inside the truck is also what blew me away. They got it so perfectly that I’m excited to let the fans finally see what we see in our Monster Jam trucks.”

Driver Haley Gauley was similarly impressed. “The view from the driver’s seat is about as close as you can get it. I was impressed by every little detail and how near perfect they are on everything.”

When you’re ready to compete, you can choose how accurate you want to make the simulation. Want to know what it’s really like behind the oversized wheels? You could jump into a cockpit view and control the front and rear axle separately, just like the drivers. You can play as one of 26 of the most popular competitors on the scene, including Grave Digger, Max-D, and Bakugan.

These are the events that you’ll see at the arena performed by the pros. But you’re not a pro (yet).

“So,” Erik continues, “we’ve added Waypoint, Rhythm, Circuit Racing, and Timed Destruction to help players develop the skills needed to compete like a real Monster Jam Driver.” Those additional modes also add a lot of extra playtime for your kids.

Driving Monster Trucks with Your Kid

You (and your kid) can quickly jump in and play whatever part of the game you want, or jump to whatever part of the map you unlocked. That’s a big deal. Any game that removes headaches while letting your children get their screen time is obviously awesome. But Monster Jam Steel Titans is built for the family, thanks to split-screen racing on the Xbox One and PlayStation 4.

As a parent, the thing Parnell likes most about this game: “Knowing exactly what is going on at all times. It’s easy to pick up and play – we made this game so that any parent could sit down with their kid, play together and have a great time in split-screen.”

Lepannen's top picks are Timed Destruction and Head-to-Head Racing. “Timed Destruction is fun and exciting. And Head-to-Head puts my driving technique to the test.” When it comes to playing with kids, Erik’s advice is to just jump in and drive. “The most fun that a parent and child could have together in split-screen would be hopping into Free Ride in the Monster Jam University world, and just driving around. If they are looking to compete, I’d recommend Timed Destruction, it’s explosive, fun, and low stress.”

Monster Jam Steel Titans is built for the kind of gamers who have always wanted a light racing simulator, but for monster trucks. And while DeLuc playfully noted that the "super intense force of landing," which requires time to get used to, isn't included in the game, the realistic physics (the engine that drives the game) really sells an experience that is ready to put you and your kid at the heart of monster truck pandemonium. But, y'know, without the roll cage.

Monster Jam Steel Titans is now available on PC, PlayStation 4, and Xbox One.