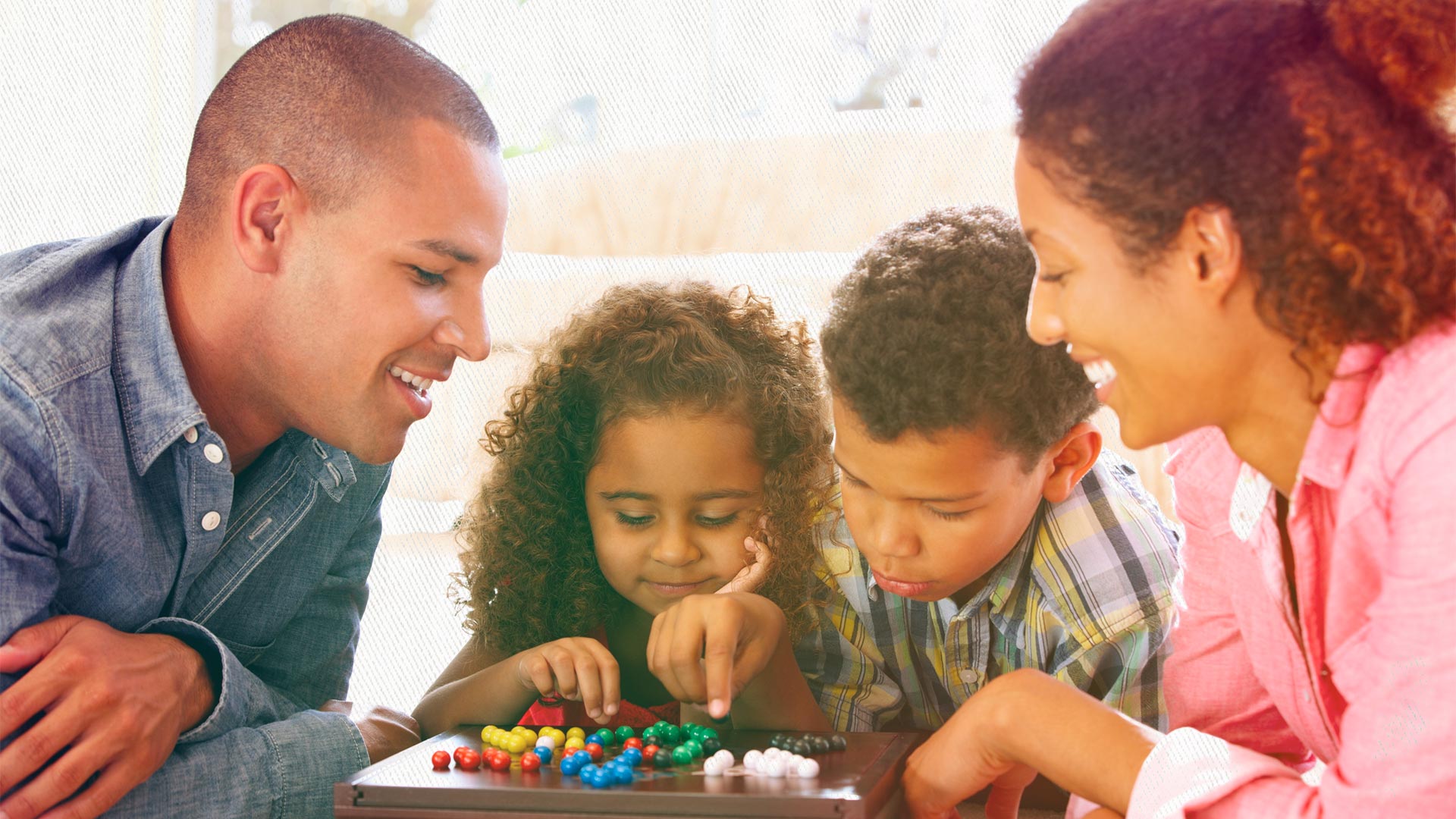 At SuperParent, we love video games and their ability to teach kids (and adults) important life lessons, as well as help us learn some valuable life skills (on top of that, they’re just fun). However, kids getting too much screen time is a real concern for many parents, so we’re here with a list of board games, jigsaw puzzles, and more that can help your family have tons of indoor fun this summer when it’s time to take a break from the screens.

Ticket to Ride on Amazon

Ticket to Ride is a fun series of board games from Days of Wonder that (typically) allows players to become railroad tycoons and construct rail lines across an in-game map in order to complete routes on cards. For instance, in the original Ticket to Ride (which is set in North America), one card may ask players to create a route connecting Toronto and Miami, while another asks them to create a route from Helena to Los Angeles, and so on. (Other games and expansions in the franchise are set in different locations, such as Germany and India.)

While Ticket to Ride’s ruleset is fairly straightforward, it requires some strategizing and forward thinking to really master. It’s recommended for players 8+, so younger players may be at a disadvantage. For younger children, a kid-friendly version of the game, Ticket to Ride: First Journey, was designed for players as young as six.

In Space Park, 1-4 players become explorers in outer space on a quest to collect crystals that can be used to complete exploration badges, and eventually turned in to earn Exploration Points (you’ll need more of these than your opponents to win the game). The game board features seven destination areas that are arranged randomly at the beginning of each game to form a circular play area, which helps each game feel fresh. While Space Park has an age rating of 14+, in our experience, younger players have no trouble picking up the game’s rules after a brief introduction.

Reef from Next Move Games

Based on natural coral reefs, Reef challenges 2-4 players to create coral reefs (using colorful coral pieces) to score points. Specifically, players must strategically arrange coral pieces onto their own play board so that the pieces match the pattern(s) found on cards. The more times a specific pattern shows up in a reef, the more points players can earn. Reef is recommended for players 8 and up, but (as with Space Park), we’ve found younger kids can understand the rules as well.

This three-dimensional jigsaw puzzle contains 108 plastic pieces that let you put together a stylish sneaker covered in graffiti (the words say things like “Hip Hop” and “Summer”). Rather than putting this one together by eye, the pieces are numbered on the back, with an arrow that tells you which direction to move for the next piece.

While the main body of the shoe is easy to put together, the base can be a bit tricky. You have to attach certain puzzles pieces to the plastic base (the bottom of the shoe) using pegs on the back of those puzzle pieces that go into slots on the base. While the plastic pieces are sturdy, we didn’t know our own strength and accidentally snapped one of the pegs by pushing it too hard onto the base (Oops!). Thankfully, a spot of super glue fixed it right up.

When the puzzle is finished, you can insert the included pen cup into the top of the shoe to store pens, paperclips, etc.

If this graffiti pattern doesn’t interest you, there are two more versions of this puzzle to choose from: one sporting an American flag pattern, and the other featuring Mickey Mouse.

Ravensburger’s Pet Park is a 300-piece children’s puzzle that features lots of cats and dogs living like humans while spending the day in the park. There are lots of details to notice in this one, from the kitten with a pacifier in its mouth being pushed around in a stroller, to a cat feeding the birds, to a naughty dog being scolded by a police officer cat next to a fire hydrant.

While this puzzle is recommended for kids 9+, it contains Ravensburger’s “XXL” pieces, which are bigger than traditional puzzle pieces, so even younger puzzlers should be able to join in on the fun. For instance, each kiddo can choose one or two of their favorite cats or dogs in the picture and work on finding their pieces while older puzzlers handle more complicated sections, like the trees and grass.

MasterPieces’ 400-piece “Family Hour” puzzles are designed to be enjoyed by multiple people at the same time. Each one is split into small, medium, and large puzzle pieces, so everyone can work on their own section (for instance, younger kids can work with the largest pieces, while adults work with the smaller ones).

If you like the idea of these Family Hour puzzles, another puzzle company, Ceaco, offers a similar experience with its “Together Time” puzzles. Currently, three Together Time puzzles are available on Ceaco’s website, featuring Disney and Peanuts characters.

If your family is up for a bigger challenge, check out this 1,000 piece puzzle that lets you put together a scene from an ultra colorful candy store. Even if this puzzle is a bit too complicated for the youngest puzzlers, they can still get in on the fun by separating pieces by color or looking for the outer frame.

If you like this puzzle, there are lots of other super-colorful puzzles in the Aimee Stewart collection, which range in piece count from 300 to 2,000 pieces.

Perler beads are small, colorful beads that can be arranged on pegboards to create anything your imagination can think up. When a creation is done, you can use a household iron to fuse the beads together. The possibilities are endless with Perler beads, so kits like this Hylian Shield give you a great place to start if you don’t know where to begin. This kit comes with 3,500 beads and the pattern to help you create the Hylian Shield from The Legend of Zelda video game franchise, but you’ll need six large pegboards (purchased separately) to actually put the project together.

We’ll be the first to admit it: Getting into Perler beads can be an expensive undertaking. A basic setup would include at least one pegboard, a few colors of beads, and some ironing paper, but the sky’s the limit after that. Even so, Perler beads are a fantastic way for older kids and adults to show off their creativity, so we recommend looking into it if your kids are creative types. If you want a cheap introduction to the hobby just in case your littles aren’t into it, a variety of single-project kits ($2.99 each) contain everything your child will need to create a small project.

Finally, if you’re looking for more Zelda Perler patterns, check out this Activity Kit that comes with 2,000 beads and 12 patterns. Or, if your family is more into Mario, there’s a pattern book for that franchise as well (beads sold separately).

These papercraft sets are like Nintendo Labo on Switch, but with paper instead of cardboard. They allow you to put together your own Minecraft blocks, mobs (animals and enemies), and more by carefully folding the included sheets of paper (some stickers are also included).

There are multiple sets to choose from at different price points, but the Animal Mobs and Hostile Mobs sets are a fun (and affordable) place to start.

Keva Planks are like popsicle sticks meets Jenga blocks. Each Keva Plank is the same size (about 1/4 inch thick, 3/4 inch wide, and 4 and 1/2 inches long), and they can be used like building blocks to create tall towers, large castles, and anything else kids and adults can dream of. While this particular set comes with 100 Keva Planks in varying shades of teal, traditional Keva Planks are a natural wood color. And while this “starter set” of sorts only comes with 100 traditional Keva Planks, a variety of different kits are available that may contain additional accessories, like the Keva balls included in the Contraptions set and the counterweight basket featured in the Trebuchet kit. There are even Brain Builders kits that contain cards with pictures of projects that children are asked to recreate in the real world.