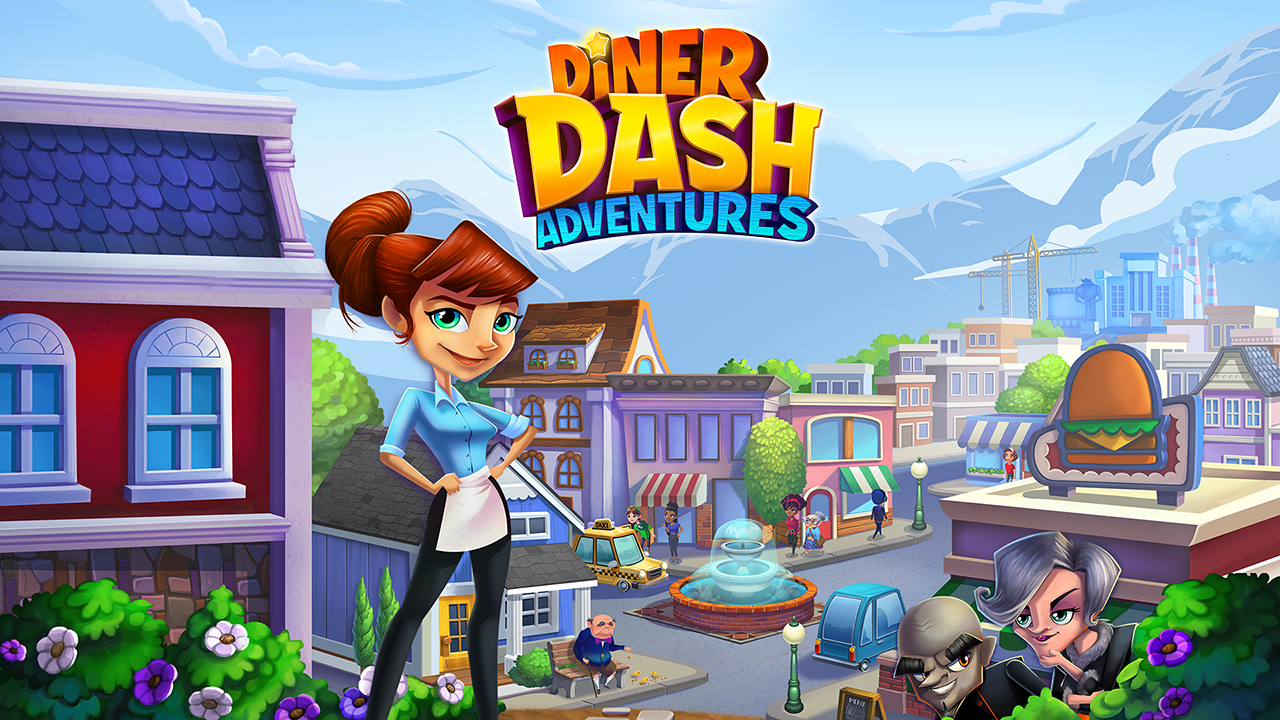 Diner Dash Adventures is the latest installment in the popular Diner Dash series of time management games, which began with the first Diner Dash on PC in 2004.

In Diner Dash Adventures, the series’ main character, Flo, has returned to DinerTown to find the Greasy Spoon Diner (run by her friend Cookie) in a state of disrepair. Players will need to help Flo serve customers in order to earn money and stars that can be used to repair and upgrade the diner (as well as other parts of DinerTown), all while watching out for Mr. Big and his associates, who want to run Flo out of business.

In each level, players will need to complete tasks like seating guests, taking their orders, serving their food, and collecting their checks. The faster that players complete these tasks, the better, as customers can become impatient if they’re left waiting for too long. There’s also an element of strategy here, as players can earn bonuses by completing the same action multiple times in a chain (for instance, serving food to two customers in a row without completing another task in between), or by seating customers at tables with the same color as their clothing. (While players start out serving food in a diner, they'll eventually move onto a hotel, which changes the gameplay to resemble that of the Hotel Dash time management games.)

As players complete stages, they’ll earn stars that can be used to purchase upgrades for the Diner (and eventually other areas of DinerTown), which progresses the story. If you’re familiar with match-three mobile games like Gardenscapes, Homescapes, and Matchington Mansion, this setup is very similar.

In addition to upgrading the overall diner, players can spend the coins they’ve earned (typically along with Gems, a premium currency) to upgrade the diner’s appliances and individual dishes. (Some premium currency is given away for free as players progress.) Depending on the upgrade, these may make appliances cook food faster or make dishes worth more coins. The game places a heavy emphasis (perhaps too heavy) on these upgrades -- as levels become more difficult to complete, players will need to purchase upgrades in order to be able to finish them.

While Diner Dash Adventures is free-to-play, players can spend real money on a number of in-game items, such as coins, Gems, boosts that help players complete levels, and energy, which is spent to start levels. Energy will also recharge automatically over time. Here's a quick word of warning: The game will sometimes automatically activate certain boosts before a level begins, so long as you have those boosts in your inventory (it won't spend money without your consent). Make sure that you turn these boosts off before starting each level if you don't want to waste them.

Diner Dash Adventures is available to download for free on iOS and Android devices. It's rated 4+ on iOS and E for Everyone on Android. While the game is family-friendly, the story plays out through text windows, so younger players may need help keeping up with the story.

Finally, while time management games are typically popular with adults, we like the game’s potential to help younger players build their reflexes and forward-thinking skills as the game encourages them to plan their actions ahead of time to earn combo bonuses.

Check out the first 11 minutes of Diner Dash Adventures in our SuperParent First Look below.

Disclosure: Glu Games sent a code for Diner Dash Adventures to SuperParent so we could play the game before it launched on June 19.