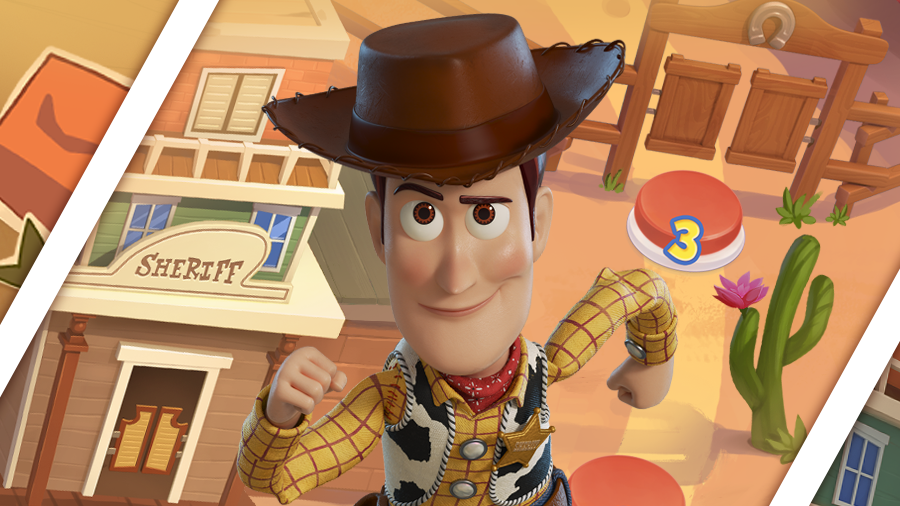 Toy Story Drop is a free-to-play match-three puzzle game set in the world of Disney Pixar’s Toy Story. While the game includes content seen in Toy Story 4 (which hits theaters on June 21, 2019), Toy Story Drop isn’t based on the new movie.

In Toy Story Drop, players will be challenged to complete match-three levels to help Woody, Buzz, and their friends progress through various short stories. For instance, at the beginning of the game, the toys must clean up Andy’s room before he comes home.

In each level, players have a different goal to complete before running out of moves. One level may ask players to collect the required number of a specific symbol by making matches with that symbol, while another may ask them to move objects to the bottom of the board to collect them, and so on.

Players can make matches by swapping the locations of two touching symbols to form a line of three-or-more matching symbols, or a 2x2 square of four matching symbols. When players make a 2x2 square match, a match of four-or-more symbols in a line, or a match in a T or L shape, a power-up will appear on the board that can help them clear extra symbols from the board at once.

As players complete stages, they’ll earn coins that can be spent on things like extra moves if they fail a level, or special power-ups, such as a Flying Saucer that can be used to remove one symbol from the board. Players can purchase additional coins with real money, so make sure your device settings will prevent littles from making purchases without your consent.

Finally, as players progress through the game, they’ll collect playset toys that correspond to the game’s main characters. Once all of the toys for a certain character have been collected, extra story levels will be unlocked.

Toy Story Drop is available to download for free on iOS, Android, and Amazon devices. The game is coming soon to the Microsoft Store on Windows 10 for PC. On June 21, the game will be updated with Toy Story 4-themed content featuring characters like Forky and Bo Peep.

Check out the first five levels of Toy Story Drop in our SuperParent First Look below to see how this one plays.