Invasion of the Cow Snatchers: A SuperParent Tabletop Review 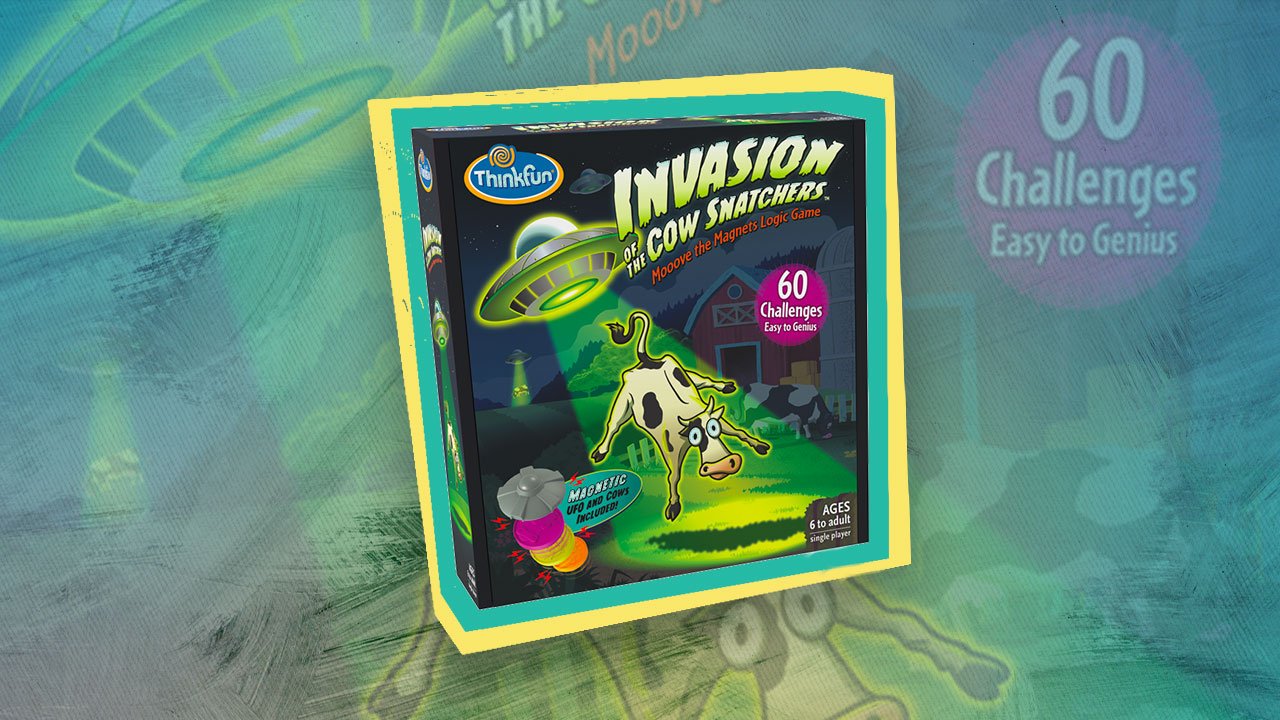 Invasion of the Cow Snatchers isn’t really a tabletop game in the way we typically think of them. There are no winners and no losers (except for maybe the poor cows getting abducted by aliens).

Instead, Invasion is part of ThinkFun’s line of logic games that challenge players with a set of 60 increasingly difficult puzzles rated “easy” through “genius.” The game consists of a deck of cards, a plastic tray, a number of different barrier pieces in a variety of heights, magnetic cows, cardboard crop circles, a clear lid, and a UFO to pick up the cow magnets.

What’s the object of the game?

In Invasion of the Cow Snatchers, players must abduct each of the magnetic cows, finishing the puzzle by picking up the red bull token. Each puzzle includes a variety of barriers that allow different numbers of cows to pass over them while carried by the UFO (which itself contains a powerful magnet and sits atop the clear lid).

The included cards each have a diagram of the board layout for a single puzzle, a difficulty rating (easy, hard, extra hard, and genius), and a solution on the back. The complexity tiers are clearly defined on the cards and in practice.

The easy puzzles were a breeze for adults and didn’t take our three children (6, 7, and 11) any time to work through. Once we got into the medium range, things slowed down a bit. The hard puzzles often require a number of attempts and careful planning.

The genius-level puzzles are where the meat of the game is. Two major changes ramp up the difficulty considerably. Cardboard crop circle tokens are placed on the board denoting places the UFO can drop cows off temporarily. This is necessary, because the solutions all require the cows be in a specific order when the red bull is collected to signify completion.

The kids and I breezed through all the easy, hard, and super hard puzzles with little problem. The genius set has slowed our progress considerably, and it’s delightful.

Each of the puzzles is well designed, with clever use of red herrings to distract from the correct solution. Invasion does a lot with a handful of pieces that all neatly fit under the lid for storage, though we recommend hanging onto the box so nothing falls out.

Is there any way to play with multiple people?

While Invasion of the Cow Snatchers is technically a solitaire game, if you have multiple kids, you can still play together. Our three take turns solving the puzzle, but everyone is invited to look on and figure out the correct solution.

Our little ones are eager to give each other hints (when requested) and help set up the puzzles for one another. For some players, tracing the route with their fingers before moving the UFO is the most satisfying way to play. For others, the tactile nature of moving the UFO and sucking the magnetic cows up to the “sky” is far more enjoyable.

Alternatively, you might find that your kids don’t share quite so well or they don’t wait until everyone has had a chance to think through the solution. You can still play with your child by setting up the puzzles for them and being on-hand with hints as they try to work things out.

Invasion of the Cow Snatchers is an unmitigated hit in our house. Our kids have been asking to play it for days, and we’ve been making this part of our evening routine.

The only drawback is that the 60 puzzles go by quickly. I’d love to see ThinkFun release an expansion deck down the line to add more puzzles (possibly with some new, small pieces to diversify the experience).

Whether you’re looking for something for your young one to enjoy on their own or a fun way to teach logic principles, Invasion of the Cow Snatchers is a great option. The fast set-up (and reset if you fail) for each puzzle makes it fun and low-friction to experiment with solutions. The crafty puzzle design leaves players feeling confounded one second and brilliant the next. Finally solving a diabolical layout delivers a satisfying sense of success that makes Invasion of the Cow Snatchers an easy recommendation.

Disclosure: ThinkFun sent SuperParent a copy of Invasion of the Cow Snatchers for coverage purposes.