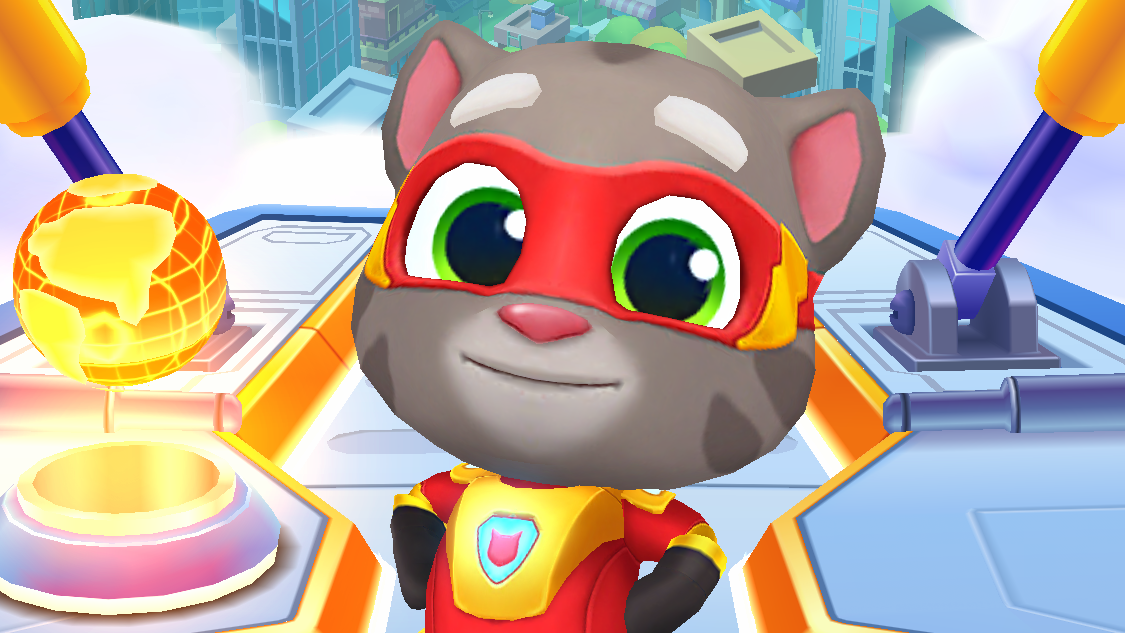 Talking Tom Hero Dash is an upcoming free-to-play mobile game in the popular My Talking Tom and Friends franchise. Outfit7 Limited, the company behind the franchise, gave SuperParent a chance to play a pre-release version of the game so we can let you know what to expect.

Talking Tom Hero Dash is an endless runner similar to games like Subway Surfers and Temple Run (and another Talking Tom game, Talking Tom Gold Run). The game asks players to help Talking Tom save the world from a group of raccoons that have taken over.

In each run, Tom (dressed as a superhero) will run away from the screen automatically, and players can use swipe controls to move him left and right, and to jump over or slide under both stationary and moving obstacles. Players can collect coins scattered in the path, as well as power-ups like a magnet that collects nearby coins automatically for a limited time, and a shield that temporarily protects players from damage, among others. The game ends when players run into an obstacle or otherwise can’t continue running.

The game’s environments are filled with raccoons, and players are encouraged to “run into them” to have Tom deal an attack to defeat them. Defeating raccoons earns players points, which will allow them to earn treasure chests over time. These chests take time to open, but players can spend premium currency to open them instantly. Chests can contain a variety of in-game objects, including free and premium currency, as well as new costume parts for Tom and his friends. This isn't the only optional in-app purchase in the game.

While players start with just Tom on their team, they can eventually unlock four of Tom’s friends: Angela, Hank, Ginger, and Ben. Each one has multiple superhero costumes to choose from.

In between games, players can use the coins they’ve collected to get rid of the raccoons around town and restore damaged buildings and scenery. Players can also spend coins on additional treasure chests.

Talking Tom Hero Dash will be released on iOS and Android devices on June 6, 2019. Players can pre-register for the game on the game’s website, and if 3 million players pre-register, players will receive a special costume in the game once it launches.

One final thing worth mentioning: In addition to containing in-app purchases, Talking Tom Hero Dash is also supported by ads -- both banner ads and full-screen ads that appear automatically as players play. The game can be played offline to prevent these ads from appearing.

Check out seven minutes of pre-release footage from Talking Tom Hero Dash on iOS below to see more of what to expect when this one launches next month. Keep in mind, since the game isn’t out yet, gameplay may change before the game is released.