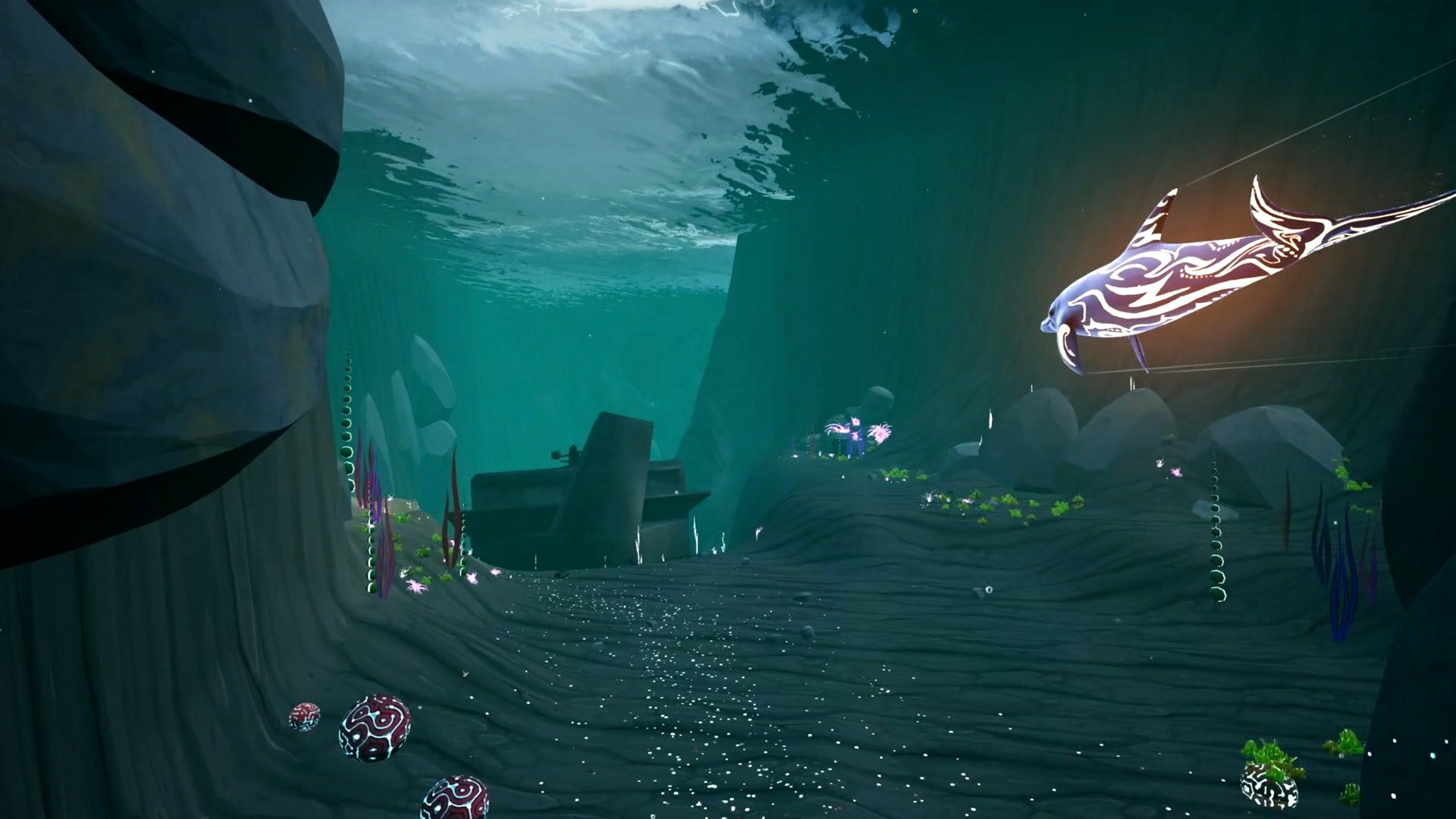 Jupiter & Mars (PSVR, PS4) isn’t your typical game. And, no, it’s not because the story is told through a pair of dolphins navigating future seabeds. There’s beautiful underwater vistas, revealed through neon hues and echolocation. It’s a meditative adventure game that’s fun to play in VR or on your TV screen.

Jupiter & Mars also walks a fine line. It raises real concerns about the future of our planet without being preachy or pigeonholing itself as edutainment software. In short, it’s a good game with a story to tell -- that’s good for everyone to hear.

James Mielke, one of the co-founders of developer Tigertron, made this game his mission for a couple of years now. As he’s put it before, “I’m concerned about the world that we’re leaving for our children.” So, with that in mind, we took a few minutes to chat with him about the game’s development -- and his children -- before I let my own child start “reviewing” Jupiter & Mars for this story.

You can read the full interview on GameDaily.biz, our sister site.

SuperParent (SP): How did you go about striking the balance between making a fun game, but also being educational and not preachy in the process?

James Mielke (JM): We wanted to avoid coming off as “edutainment” by any means possible, because we’re probably not something you’d want to use in a classroom as a scientific reference. Also because it infers something other than a ‘proper’ game. We also didn’t want to preach too hard, because gamers don’t like to be spoken to in that manner. So we decided early on that we would just present our characters in this kind of environment, based on the worst possible outcome for post-humanity, and let people come to their own conclusions. We did base as much as we could in the game on actual science, like the A.H.D.s (acoustic harassment devices) that are actual tools used in the real world by scientists to keep, say, feeding orcas away from areas they’re (the scientists) doing research in. Basically we tried to keep it real, while taking the occasional liberty of adding in fantasy elements, such as when Mars inherits the shell of a goliath conch to use as a battering ram for harder barriers in-game. There’s a bit of soft character evolution in Jupiter and Mars that isn’t what I’d call “realistic,” but hopefully it’s still fun.

SP: What did your own kids take away from playing Jupiter and Mars?

JM: The characters became a part of the family for them. They’d come home from school, and since our work studio is in the bottom of our duplex, they’d always come down to the studio, see the game on the TV, and usually shout “It’s Jupiter and Mars!” That is the first and foremost thing for them; that the characters are part of their upbringing, which is enchanting to see. I guess the second most emotional thing, is when they first learned some of the story-related outcomes in the game, which they hadn’t known about. My son and daughter were bawling. I guess this is important for me to tell you, because your son might experience similar feelings.

A 7-Year-old’s View of Jupiter & Mars

While James was answering my questions...and teasing out that my kid might burst into tears by game’s end, I fired up the PS4 for a quick hands-on report as seen through my 7-year-old’s eyes.

A Jupiter & Mars dance party broke out the second it started. No joke. Mielke recently walked through the soundtrack on the Playstation Blog, but all you need to know is that it deserves to be cranked. Whether it’s driving beats or the slow and soothing cadence as you go deeper into the game, it sets a mood.

Another thing unusual for a game session with my kid, it quickly prompted some discussion. From the outset of the game, Jupiter & Mars starts with some big topics. In this future, the “earthwalkers” (us) are gone. Immediately, my kid asks how this could happen. And I take a few minutes to explain it. The rest of the story unfolds as a pair of dolphins follow the elders on a mission to shut off ancient machinery that is messing with the natural order.

Then we start exploring the underwater world. Kiddo takes to using Jupiter’s abilities like a fish to...yeah, sorry. “I like seeing how the shapes change and look clearer with echolocation,” he tells me. Sure, he’s heard about a dolphin’s abilities at the aquarium and in books, but he was getting a taste of what it must be like for them to actually “see.”

And, yes, there are liberties taken where these dolphins gain abilities to tackle more puzzles, but it’s all in service of making a fun game to play. It’s not a heavy action game -- as Mielke, himself, noted above. But that didn’t stop my kid from wanting to play. In fact, he was fascinated by what was around every turn. The fluorescent neon that lit up the darkness reminded my kid of bioluminescent algae (a term he only knows because of a scene from Moana. I’ll still take the “win”) while searching for collectables and ways to navigate around the environment.

From what my kid has played so far, he’s enjoyed clearing some puzzles, collecting things hidden in the environment, and -- he wanted to make sure I put this in the story -- saving baby turtles trapped in plastic. Very important.

I haven’t even discussed the VR experience -- mostly because I haven’t strapped any head-mounted displays on my child yet -- but I can tell you that as good as this looks on the TV screen, it’s clearly more immersive when you actually feel like you’re underwater. If you’re looking for an exploration game, this is worth checking out.

Before signing off, I asked Mielke about some of the reactions he hopes to see out of people after playing the game -- besides children’s tears, apparently. “I hope to see that people feel some connection to our characters, that they take away a bit of their predicament, and consider our planet in a different light than they did before playing Jupiter & Mars.”

I’m happy to report that it’s already working on my kid. And he hasn’t cried. Yet.