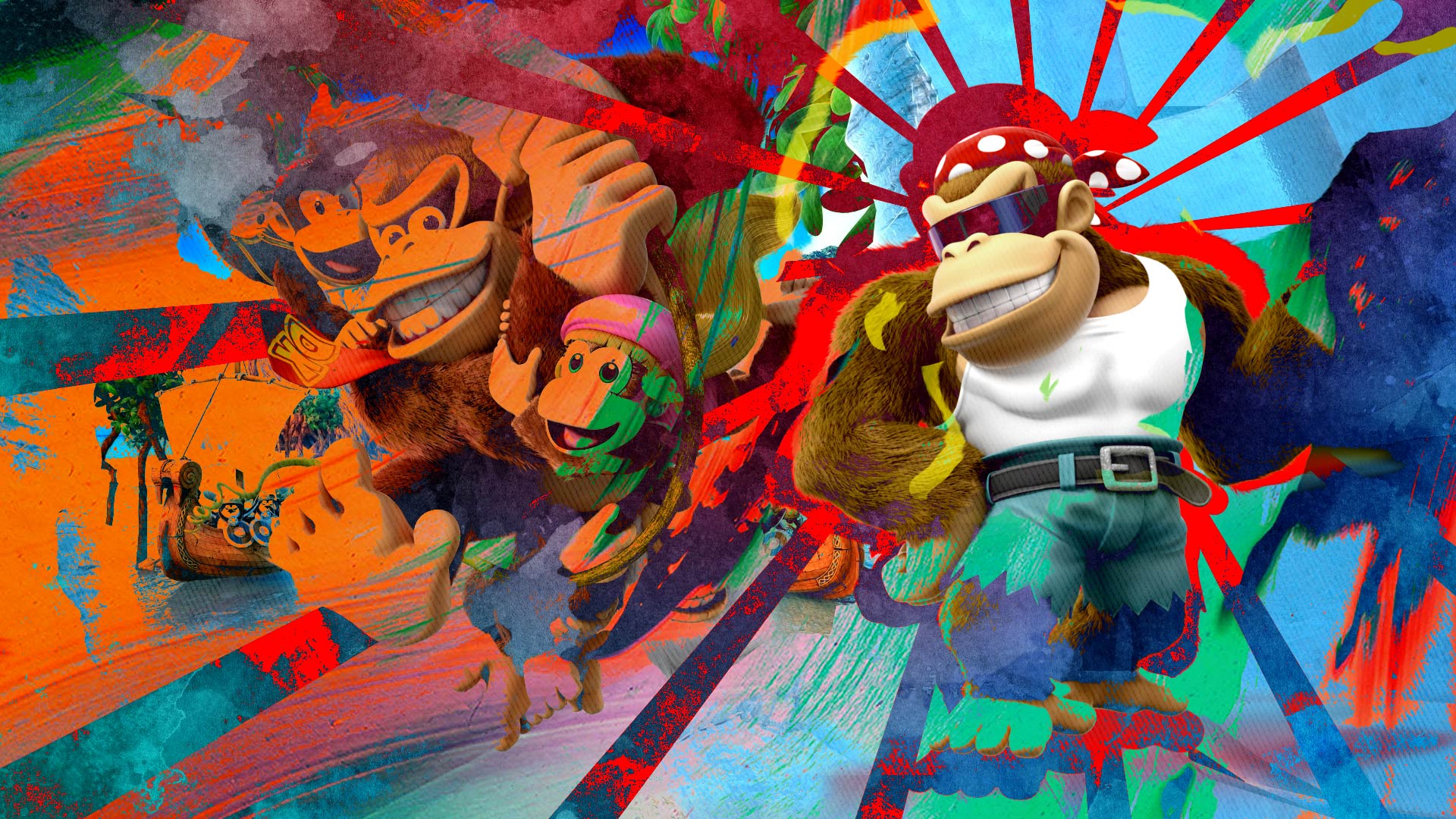 Donkey Kong Country is a longtime Nintendo staple. Its roots are rich and deep, reaching as far as back as 1994 with its first apperance on the Super Nintendo. Even back then, Donkey Kong Country was a marvel. It stretched the technology further than anyone had ever seen at that time, and it followed up with gameplay that was crisp and challenging. Over the years, I've played through almost every single iteration of Donkey Kong Country that there's been. The only one I'd missed was the original 2014 release of Donkey Kong Country: Tropical Freeze for the Wii U.

A lot of people missed out on that DKC game, to be fair. So, when Nintendo announced in January that a retooled version of the Wii U Donkey Kong Country game was making its appearance on Switch, it was an easy yes. All the years I’d sunk into the series, all the time I’d spent passing the controller back and forth with my younger brother — I’d finally get to share the series with my kids.

But before you peel the banana on this game for the kids, here are a few things to consider.

The Donkey Kong Country series is an old-school run 'n' jump platformer from the mid '90s. You play as a Donkey Kong — yes, the bad guy from the 1981 arcade game of the same name — and you must return your island home to its splendor after it’s invaded by blizzard-happy bad guys known as the Snowmads. In Original Mode, which is exactly like the Wii U version, you’ll be able to partner up with Diddy Kong (DK’s little buddy since 1994), Dixie Kong (Diddy’s girlfriend since 1996) and Cranky Kong (DK’s grandpa).

With your crew in town, you make your way through the island — jumping, rolling, bouncing, swimming, floating and ponytail-helicoptering along the way. If you play in the game's Original Mode, you’ll meet up with Funky Kong, and he’ll try to sell you helpful items that you can equip at the beginning of each level. If you get stuck, you can buy and equip balloons that will help with air underwater, float you back to safety if you fall, and give you more lives. These Funky Kong items are great if you have any beginners playing the game. You can also enlist Squawk the parrot to help you find puzzle pieces. There are five islands to work through, each with their own perils and baddies, until you reach Donkey Kong Island, where you’ll have to battle the Snowmads’ boss, Lord Fredrik.

What’s the difference between the Switch version and the Wii U version?

At first glance, DKC: Tropical Freeze for Switch is absolutely gorgeous. It’s beautiful in handheld mode and it’s eye-melting-ly pretty on the big screen. The graphical upgrade wasn’t necessary, as the game looked gorgeous on the Wii U, but it makes for a big “wow” factor when playing.

DKC: Tropical Freeze’s release on Switch also brought a brand-new mode for players to hang-ten with: Funky Mode. In Funky Mode, you’ll be able to play as the coolest Kong ever: Funky Kong. Funky’s been around since 1994, but this is the first time he's been a playable character. Funky makes the game much more accessible for an audience who didn’t grow up with a steady diet of punishing platformers or younger gamers who are getting into this type of game for the first time.

DKC: Tropical Freeze is a cautionary tale for young gamers, so be wary. Giving your littles controllers and letting them eke their way through brambles and ice on Original Mode is a surefire way to guarantee frustration and maybe a few tears. But, fear not: This is where the game's kid-friendly Funky Mode comes to the rescue.

Playing as Funky Kong cuts the challenge down quite a bit and allows players to move through levels far more quickly than you can with DK and his adventuring fam. Funky is immune to landing on spikes, since he has his handy surfboard, which means that getting speared by accident isn’t much to worry about (unless you jump up into them). He uses his surfboard as a jumping aid, too, so you can double-jump and helicopter around as if you were accompanied by Dixie’s ponytail-copter.

Funky has more health than DK, too. When by himself, Donkey Kong only has two hearts. When he’s partnered up with Diddy, Dixie or Cranky, they have four to draw on. But Funky has five hearts, which eases up on the amount of balloons lost during the course of a level. On Original Mode, it’s easy to go from 30+ balloons to 10 over the course of an island, especially if its platforming elements present a particularly nasty challenge.

Funky is also able to barrel roll and change direction far more easily when swimming. Swimming in Original Mode in DKC: Tropical Freeze is a breeze in comparison to earlier DKC games, but DK isn’t a natural in the water like Funky is. I mean, Funky surfs. DK gives piggyback rides. One of them is going to be better in the water than the other.

Funky’s role in the game doesn’t take away the item shop, though. Tawks, a fabulously mohawked parrot, mans (birds?) the store and even gives Funky an “employee discount” for visiting. Which means that you can still buy all the balloons, collectibles and hearts that you’d like, just like in Original Mode.

Funky Mode is meant to ease players into the experience, much like drive-assist does inMario Kart 8 Deluxe on Switch, but it doesn’t replace the need for some platformer proficiency. It makes the game accessible, but not “easy.” Funky’s surfboard-floating is slow-as-molasses-in-a-tropical-blizzard and has the tendency to hinder movement across the level if you’re not careful. And Funky isn’t immune to baddies, either, so timing those jumps and rolls is still important.

Okay, but is it good for families?

Yes, Donkey Kong Country: Tropical Freeze for Switch is family-friendly. I’d hesitate to say that it’s controller-friendly in Original Mode, but that’s a family-to-family problem, rather than a game problem. The multiplayer mode hasn’t changed at all since the original Tropical Freeze, so it’s just as fun as it always was. Funky Mode ensures that newbies and small children will be able to enjoy the content without succumbing to tears of frustration.

There’s very little in the way of reading, so getting even the smallest kiddos into DKC: Tropical Freeze is, as my youngest daughter says, “Easy peasy lemon squeezy.” There’s no need to go out and buy extra controllers for the kids to use, either. It’s a two-player co-op game, so they can use one of the included Nintendo Joy-Cons. There’s even motion control, for those of us who prefer the Super Mario Odyssey control scheme.

Playing on Original Mode will either end up delighting children who are naturally competitive and love learning the muscle reflexes needed to master the game… or, it could completely deflate and discourage children who need the positive reinforcement of constantly moving forward through a level. There are multiple save slots, so let your kids know that they can start over anytime they get too bored or too frustrated. After all, Original has a ton of personality — because who doesn’t love Diddy, Dixie and Cranky — even though it’s much more difficult.

My personal love of DKC games runs deep. Being able to share that love with my kids now that they’re old enough to roll with me and DK makes my fingers tingle with excitement. Their cries of “Mama, I’m such a good gamer, watch me!” delights me to no end. It’s a great game to sit down and enjoy with them, even if you’re watching from the sidelines and cheering them on. Don’t slip on a banana peel and miss out on this one.