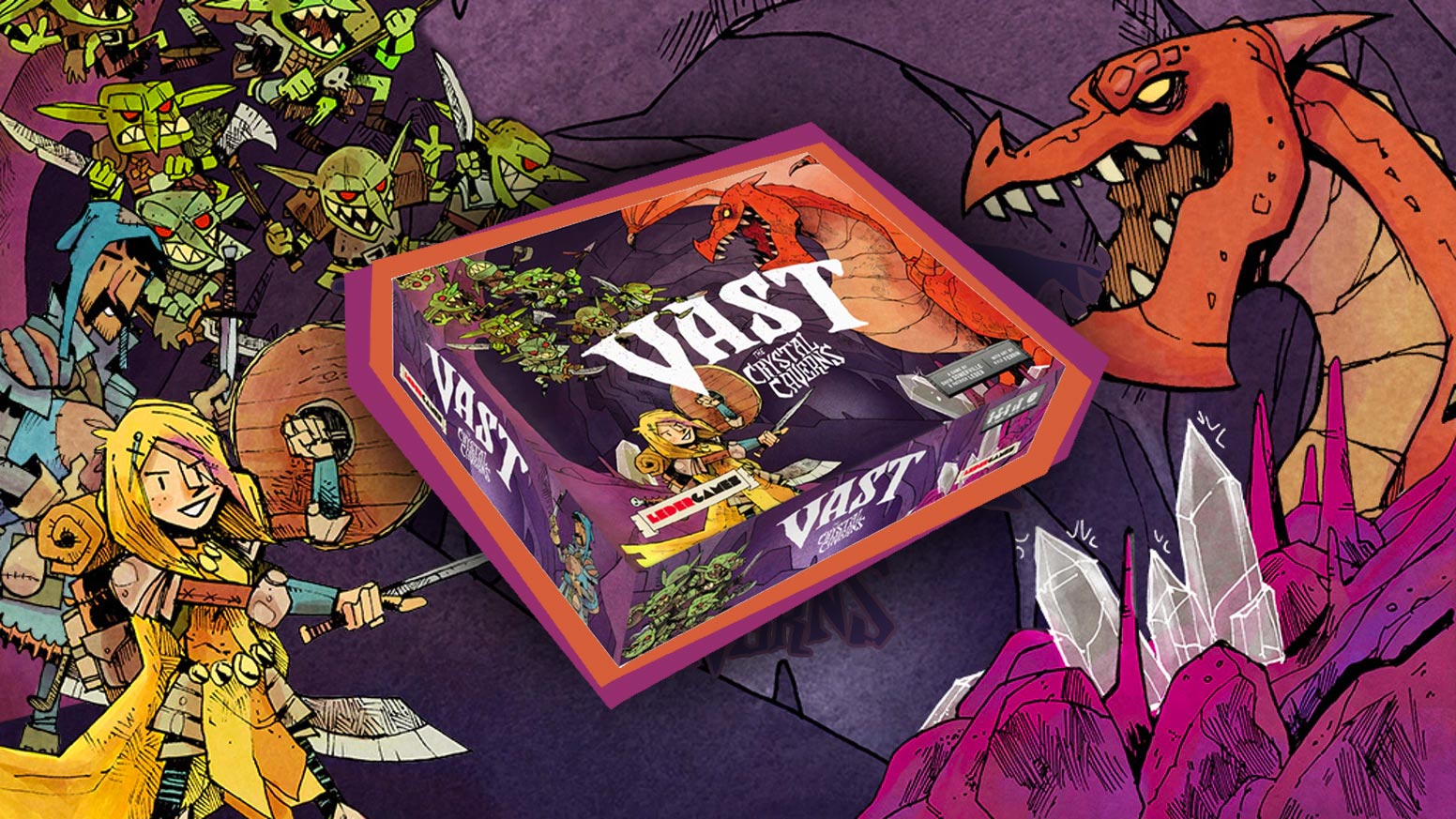 Perfect balance at the table can be fun. Every player begins with the same set of tools, shaping competition through choices made each turn.

There is also great joy in asymmetry. Giving players different powers increases complexity, but also drives replay. Players often have different experiences depending on which toolset they can access, and combining different roles can result in a game that feels brand new from play to play.

Fully asymmetrical games take that concept to the extreme. Each player not only has an entirely different set of abilities and resources, but also unique win conditions. Leder Games specializes in fully asymmetrical games with the award-winning Root, a game of woodland politics. The company’s first outing, Vast: The Crystal Caverns, is a great introduction to the fully asymmetrical genre, taking players into a living cave that threatens to eat them alive.

What is Vast: The Crystal Caverns?

In Vast: The Crystal Caverns, players take on one of five roles: the noble Knight, the hungry Goblins, the sleeping Dragon, the cursed Thief, and the Cave itself (which serves as the game’s map and is formed differently in each playthrough). In most games of Vast, the goblins try to emerge from the shadows to kill the knight who seeks to slay the dragon before it wakes from its underground slumber and escapes the cave, which is trying to expand completely and then collapse in on itself and kill all who walk its halls. Then there’s the thief, skulking in the shadows, trying to steal treasure from other players in order to break his eternal curse.

It is best if one player has a grasp of each of the game’s roles to guide a first playthrough. To prepare to teach Vast, I watched an excellent walkthrough by JonGetsGames (below). It makes sense for the most knowledgeable person at the table to play the role of the cave, guiding the other players through their first few turns and reminding of the rules.

At its core, Vast is a dungeon crawl, making it accessible for younger players. The content is completely safe with playful art (there’s no blood or graphic descriptions). However, the fully asymmetrical nature of the game does make it a bit harder to teach.

Leder Games has done a remarkable job of balancing Vast, ensuring that the game scales well at all player counts. The rulebook includes recommendations for player role combinations that will work the best in concert when you don’t have five people around the table.

Some of these change the win conditions for some roles. For instance, in a three-player game featuring the knight, goblins, and the cave, there is no dragon for the knight to kill. Instead, the knight is tasked with destroying five of the cave’s crystals and escaping.

In some games, reduced player counts can negatively impact the experience. Vast’s multiple difficulty options and variants help iron out what could have been rough spots in the game’s player count profile.

How complex is Vast?

By their very nature, asymmetrical games are significantly more complex. While Vast features a great deal of player interaction, each role has its own ruleset, including movement and combat. Progression toward the varied goals is managed by way of player boards that are entirely different.

Leder Games has done everything possible to create clarity from the chaos. This is handled through color coding and symbology that prevents players from becoming confused about which pieces are theirs: the knight's key components are yellow, the cave’s are purple, the dragon’s are dark red, the goblins’ are green, and the thief’s is gray. Treasure chests are a neutral brown, as every character has use for them.

During your first game, it’s advised to focus on what you can do on your turn. Talk through your turn so your opponents start to get a feel for how your character works and how you might end up interfering with their plans. Over the course of the game, each player’s power will grow and be hindered by the actions of other players.

For instance, the knight earns “grit” (think experience points) to unlock more action cubes. More action cubes mean more options. However, other players have ways to sap the knight’s grit and keep that player from getting too close to victory.

The dragon must slowly wake by completing specific actions on its turn. By waking, the dragon earns more armor and additional cards to play during its turn. Other players can throw a leash around the dragon player by putting it back to sleep a bit.

Vast is full of clever player integrations that serve to keep things in check. You’ll start to understand what the other roles can do throughout the game, but the key to winning is staying focused on your victory condition and how close opponents are to achieving their own.

A playthrough or two through Vast should give you everything you need to get game time in the neighborhood of 60 to 90 minutes, but your first game could run two hours or more, depending on how many players are at the table.

Vast’s asymmetry is enchanting. While there is downtime as other players are planning their moves, there is good reason to closely watch what your opponents are doing to better plan your moves. However, the completely different roles make it a harder game to teach.

If you do your preparation (watch the video embedded above!), you can far more easily help your family through their first game. There is a lot of game packed into Vast’s relatively small box, and it’s a joy to get it to the table. We played with two of our little ones (7 and 10 years old), and while there was a learning curve, they picked up their respective roles.

I wouldn’t recommend Vast for families new to tabletop. But if you gather your family around the table for gaming on a fairly regular basis and have someone willing to do the research, this one is a joy to play. We can’t wait to continue exploring the variants and, eventually, add the Fearsome Foes expansion.

Leder Games has done everything to make Vast as accessible as possible, with a great rulebook, individual player tips guides, and player boards that are both attractive and informative. All of this should help players ease in. The complexity delivered by Vast’s full asymmetry is the biggest barrier to entry, but also its most rewarding feature.

Disclosure: Leder Games provided a copy of Vast: The Crystal Caverns to SuperParent for coverage purposes.