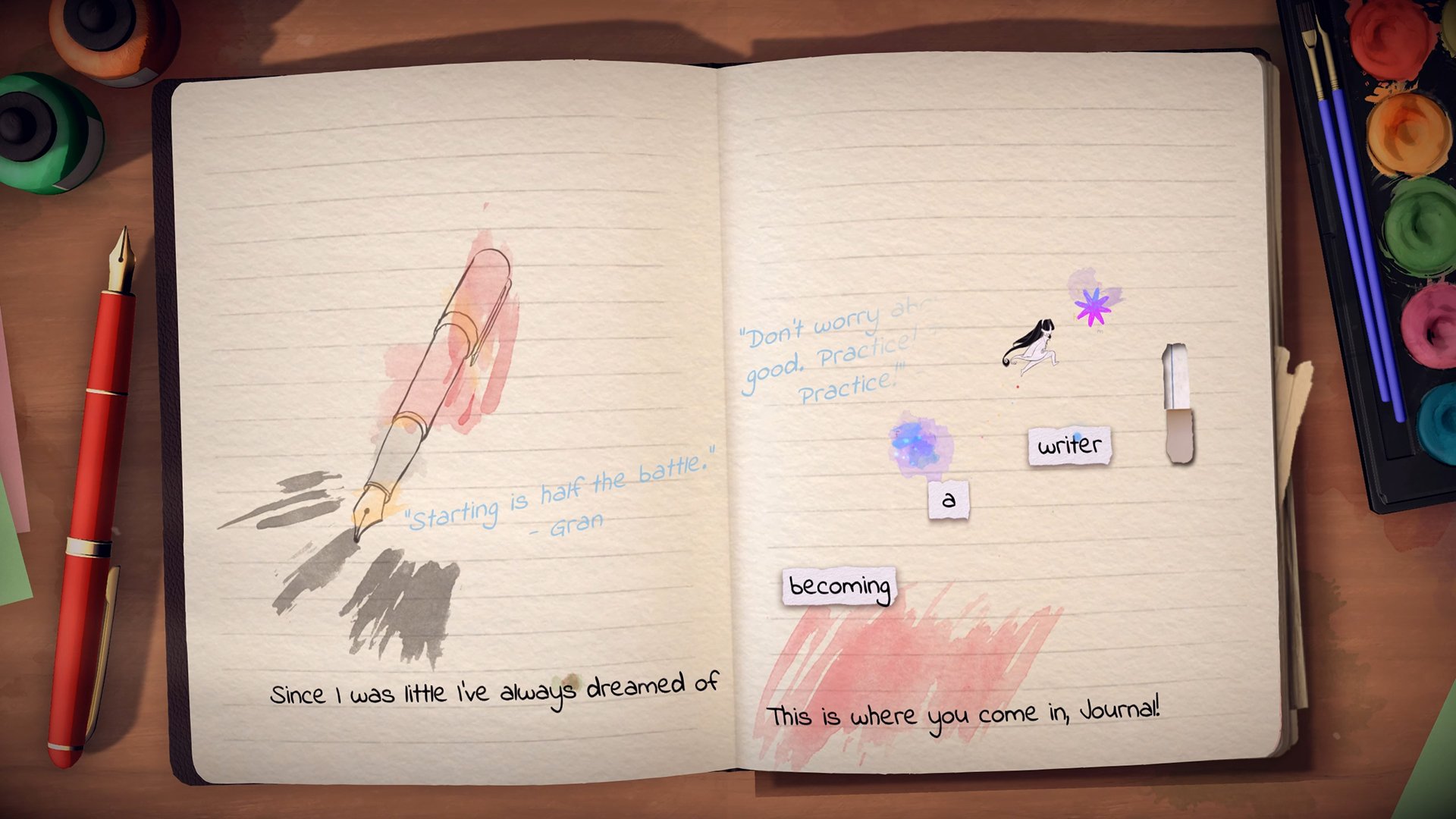 One of the things that I've always cherished about video games is the surprising ways they help us cope with the world around us. When things get hard, we can hop into a fantasy world, be someone else, save the world, and maybe our own reality is a little more bearable when we return to it.

Lost Words, developed by Sketchbook Games and published by newly minted Modus Games, embodies that experience for a young girl struggling to find her voice as a writer while coming to terms with the very real grief in her real life.

What is Lost Words?

Lost Words is a puzzle-platformer game that follows Izzy through her journey as a burgeoning writer, searching for the right world to build for her story, while struggling through her grief about losing her best friend.

Part of the game takes place in Izzy's diary, where the player guides her hand-drawn persona across the words, moving and shaping her words to build platforms to jump to. There is no "death" mechanic in Lost Words, so even young players can fall safely and Izzy's persona will simply reset at the beginning of the page.

The other part of the game is in Izzy's fantasy world of Estoria, where the player guides another heroine through her journey of becoming the firefly guardian, taking up the mantle of the elder guardian before her. There are similar platforming elements to Izzy's diary, but instead of using words to build paths, words are used for spells. If the heroine needs to be somewhere that she can't regularly get to, she will have to learn the words to get her through any particular challenge.

Lost Words sounds sad and complicated -- should I let my little children play it?

Games that deal with challenging subject matter, like The Adventures of Captain Spirit and Lost Words, are always worth playing, but rarely should we be putting these games in a child's hands and saying, "Have at." There needs to be room for conversations around the subject matter and you can't do that if you're not actively there with them for the journey.

In terms of the complexity of gameplay, however, little kids will be able to handle themselves just fine. Lost Words will be available on PC, Xbox One, and PlayStation 4, so if they've played even a small smattering of platforming games and are inquisitive whatsoever, they'll be fine with Lost Words.

What about Lost Words is a "must buy?"

The visuals in Lost Words are absolutely beautiful. As the game studio's name implies, Izzy's diary is all watercolors and sketches to accompany her thoughts as she works through the creative process alongside processing her grief. When we finally enter Estoria and meet the heroine (the player chooses her name, along with her personality traits, offering a smidge of customization), it's a different kind of lush.

Estoria is rich and lustrous, both in terms of its visuals and the accompanying soundtrack. The score is written by David Housden, a BAFTA nominated composer whose previous work includes Thomas is Alone and Volume. As the story shifts between the diary and Estoria, the music is an immediate tonal shift -- this level of detail is hard to come by in the vast majority of indie games.

But more than anything, from what I saw (and it was only a little), Lost Words merges Storybook Games' personal experiences with child psychology experts to ensure both realism and sensitivity to how children often process grief. These are the kinds of games that have the potential to stick with our kids, and our families, for years to come.

Lost Words is a journey worth embarking on, especially for the writers among us

There have often been times, especially looking back on my own childhood grief, where gaming soothed me when I lost family members to cancer, alcoholism, and the inevitability of mortality. I've been Izzy. I've been the young writer, searching for her world while still figuring out who she will be when she grows up and out of the grief that's shaping her.

It isn't often that games portray writers in a positive light. We're often relegated to tropes, like the recluse creative or the flake or even a bit "crazy." To see a little girl, a little girl who could've been me at that age, embrace her writing so fully and have it shape the entirety of a game is… well, it's a bit life affirming.

Lost Words is appropriate for children, of course, but it's for every adult who struggled through grief to find themselves, to keep creating, and eventually break through the other side to find it somehow more beautiful than they ever thought possible.