The Adventure Pals: A SuperParent Review 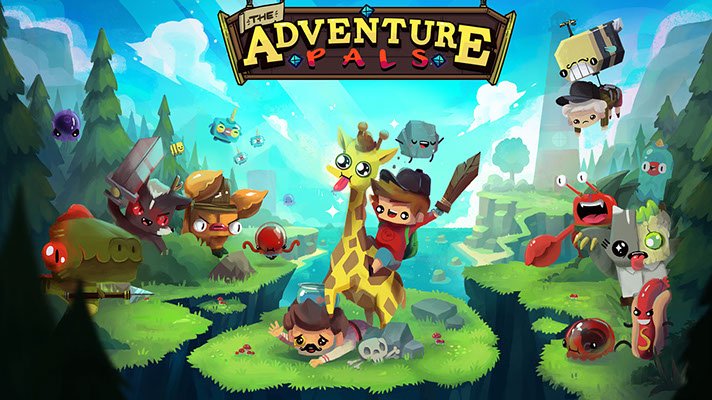 When your grandpa gets turned into a hot dog; your best friends are a sentient rock and a giraffe named Sparkles; and you need to save the world from an evil man who wants to destroy friendship — the only thing to do is to buckle up and get ready for a pun-tacular adventure from top to tail. The Adventure Pals is an adorably absurd action-heavy platformer from UK studio Massive Monster, published by Armor Games. You can play singleplayer or invite a family member (or friend) to sit down and play with you cooperatively.

The Adventure Pals begins with a birthday, as these things do — there is a birthday cake, Sparkles the giraffe, and one of your Papa’s old pals. The only problem is that Mr. B is evil. Well, that and he kidnaps Papa to turn him (and a bunch of other seniors) into hot dogs. Because, to quote the ineffable Mr. B, “REASONS.” (And yes, those all-caps are straight from the game.) You, your giraffe and Mr. Rock embark on an epic quest that is twisty-turny and giggle-inducing all the way through.

It has a varied landscape to adventure in that it includes forests full of bandits, beaches full of pirates, a sea full of gnarly pufferfish and aliens, and somewhere along the line… a town full of Toast People. Mr. Rock’s dad is a gruff kind of soul, but he’s also in a band called “Rock and Roll” with Mr. Cinnamon Roll, so… at least he’s also full of dad jokes.

The absurdist humor is wonderful and dances on the edge of Spongebob Squarepants meets Adventure Time. It feels like it should be inappropriate in places, but Massive Monster keeps things light and adorable. The music, composed by Hyperduck Soundworks, is somewhat reminiscent of The Behemoth’s Castle Crashers, but mostly because of the shared earworm-quality of the soundtrack. I can’t get “Among The Grasslands” out of my head. (You can purchase The Adventure Pals soundtrack on Bandcamp.)

The Adventure Pals is, more than anything, a delightful and approachable platformer. Unlike Ratchet and Clank, The Adventure Pals eases players into its platformer mechanics. It allows younger players to slowly wade into the challenge without causing frustration out of the gate. My 6-year-old son, whose focus is usually on Minecraft, Color Switch and Battleblock Theater, had no trouble grasping the controls. He picked up on jumping (including Sparkles’ helicopter jump) the quickest.

This isn’t a game to play with very small children, however. Children that can’t read (or are just beginning to read) will find the sometimes overwhelming amount of text difficult to keep up with… and, despite the witty writing, you may find yourself frustrated at having to read all of it out loud. If you do decide to play with younger children — and you want to enjoy the hilarious quips along the way — make sure you play through the game by yourself first. Trust me, it’s worth the extra time.

In general, platform-heavy games are difficult for children to grasp because they require a lot of trial and error to learn. The Adventure Pals subverts the initial learning curve involved with mastering a platformer by making failing fun. You’ll automatically consume health potions before you lose a life and go back to the beginning of the level. The most complex platforming is done to get optional collectibles, like stickers, chests and cupcakes. (How else are you going to feed the Cupcake King cat and get cool wearables for you and Mr. Rock?) If you or your kiddo are getting frustrated, skip the optional parts of the map and make a beeline for the level’s exit.

In terms of the difference in play modes, there’s no real difference in playing the game in handheld mode versus docked (on a Nintendo Switch). The graphics, while vivid and stylish, aren’t all that complex. It transitions seamlessly between the two modes. Playing on a single Joy-Con isn’t all that comfortable, unfortunately. You need to use the right bumper quite a bit throughout the levels, and the single Joy-Con configuration isn’t set up for that style of gameplay. Better to bust out the Pro Controller or the Joy-Con controller grip, especially if you’re going to be playing cooperatively.

If you’ve been looking for a multiplayer cooperative game to play with your child that strikes those old school Super Mario chords and scratches a Super Meat Boy itch (without the horrible grind), The Adventure Pals is definitely for you. The clever writing (and pun-tastic jokes littered throughout) kept me in giggle mode for the vast majority of the game.

The mechanics are simple enough that any child that has had experience with other platformers will pick up on them easily. The Adventure Pals, even in all of its accessibility, is still not the kind of game you want to throw a child without platforming experience into. There’s a lot to love with how gently the game introduces its mechanics, and it’s forgiving with revives, but it’s a lot of coordination to get started.

So if you and the kiddo in your life have enjoyed games like Super Mario Odyssey and Spelunky together, go and try The Adventure Pals. Sparkles and the gang definitely do not disappoint.