A Day With Pikachu 'One Lucky Day' Funko Figure: A SuperParent Review 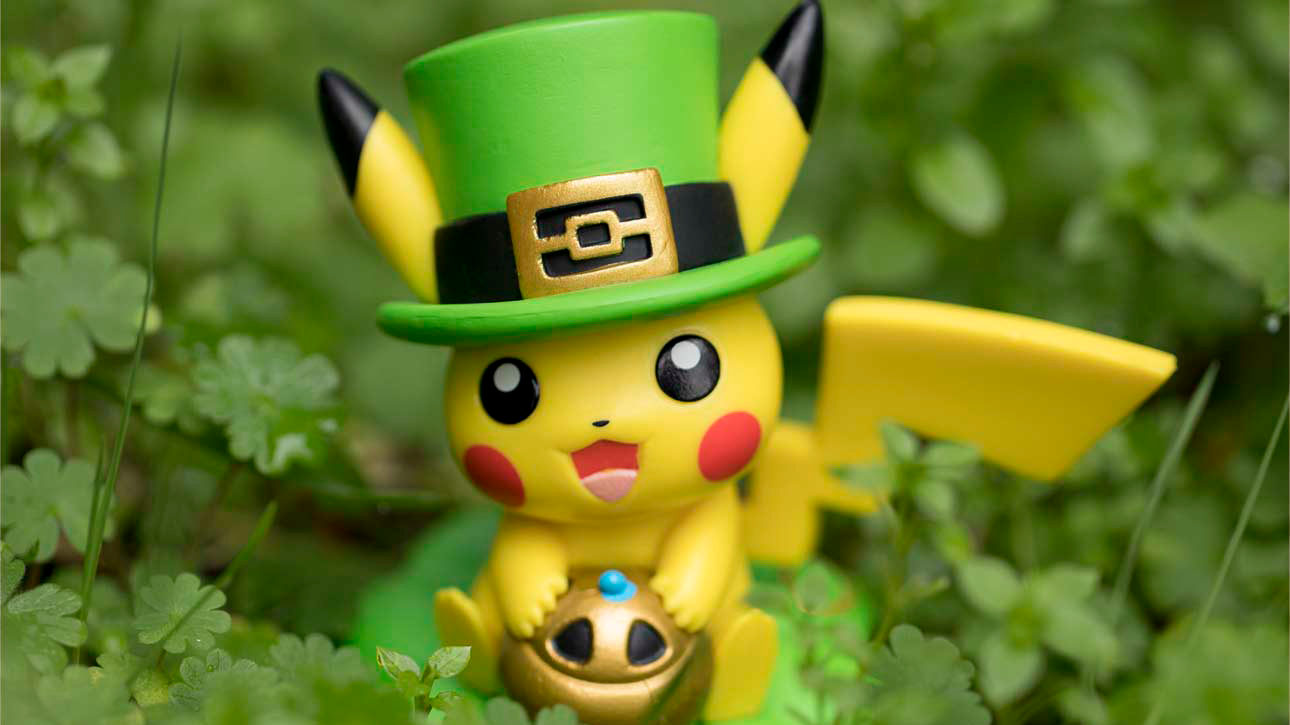 As a massive Pokemon fan, I always love seeing new merchandise coming out of the constant flow that is The Pokemon Company. As a Funko collector of over three hundred Pops, on the other (but nearly identical) hand, I’ve long awaited Pokemon to be licensed by Funko for vinyl figures. With last year’s Pikachu Pop vinyls, I finally had my wish granted, but Funko isn’t done. Enter: A Day With Pikachu.

What is “A Day With Pikachu?”

The “A Day With Pikachu” line of vinyl figures goes beyond the usual beady eyed cuteness that is the standard for Pop vinyls. This line has a bit more detail than regular Pop figures and focuses on seasons and holidays, telling a little story behind each of them as opposed to just being static figures. But, for the sake of explanations, as much as Funko made sure these are not Funko Pop figures, the comparisons are much too easy to make.

The first figure in the line is called “One Lucky Day,” and it features Pikachu sporting a St. Patrick’s Day theme.

What’s included with the “One Lucky Day” figure?

First thing’s first: This box is nearly identical to the standard Funko Pop boxes seen all over the place. This one, however, is wider in the front to accommodate the wider figure and tail, while being shorter than usual. Instead of the typical fare of numbering the figure in the Pop line, this one features an adorable “A Day With Pikachu” logo up top. Below the window reads “ONE LUCKY DAY” in the same kind of font seen on Pops.

While Pikachu’s face pokes out on the left and right sides of the box, the back tells a little more story of what the figure actually is and prominently shows the Pokemon Center logo. Weight-wise, the box is pretty close to a Pop as well.

Taking the figure out of its box reveals a plastic shell encasing it, nearly identical to any Funko Pop that’s been released. Upon first look, it’s just a happy Pikachu, wearing a St. Patrick’s Day hat while sitting atop a pile of four-leaf clovers. But, hardcore Pokemon fans will notice two in-game items alongside him that really go with the in-universe “luck” motif.

First off, Pikachu is holding an item that players of the core Pokemon games would know as a Luck Incense. On the backside of the figure, to my surprise, an Amulet Coin is tucked into the pile of clovers. In the games, if held by a Pokemon, both items double the amount of prize money players receive from trainer battles. That must make this Pikachu four times as lucky!

Is this a high-quality figure, or does it feel cheap?

This figure is pretty durable. The level of detail is much higher than the usual Funko figures, too. By far, I’d say this level of detail is closer to Funko’s Mystery Minis or VYNL lines, but giving way more depth and story to the figure. For those not accustomed to Funko’s other products, that’s pretty detailed.

As such, this isn’t a cheaply made toy; it’s a collectible in the same sense that most of Funko’s figures are. It’s not meant to be played with, but makes for excellent decor in a Pokemon enthusiast's room.

What can we expect from the “A Day With Pikachu” line in the future?

So far, we know that twelve of these Funko Pokemon masterworks will be released, one for each month going forward. As this February figure was meant to signify St. Patrick’s Day for March, it’s clear that each one is destined to be a month earlier than the season or holiday behind it. While we don’t know what every figure will look like (we can only see silhouettes for some), we do know their names:

Of note, the figures not only feature a relevant season or holiday, but sometimes offer potential easter eggs or Pokemon alongside Pikachu. This is clear in September’s “Surprises to Fall For,” which includes the de facto Halloween-esque Pokemon, Pumpkaboo, in the silhouette. In August’s “Charged Up for Game Day,” the silhouette is likely including the Victory Pokemon, Victini, possibly fashioned into a foam No. 1 finger that sports fans would recognize.

The most telling of all of the months would be November’s “A Cool New Friend,” as the next Pokemon game is potentially coming out on the Nintendo Switch around that time and the figure could include a brand new Pokemon from that game.

Is there anything else fans should know?

Currently, the only way to get the monthly line of Pikachus is by hitting up the official Pokemon Center online store as they go on sale. It’s unknown if the brick-and-mortar Pokemon Centers will supply them at this time, but it’s likely that this could be an online-only product due to the limited nature of it. Limited edition Funko products tend to go pretty quick, no matter what they are. In fact, this specific figure is currently “Out of Stock” on the website only an hour after it launched, but more may be available at a later time.

In addition, with the announcement of the A Day With Pikachu line, we received our first glimpse of the upcoming Bulbasaur Funko Pop that goes along with the previously released Pikachu. (It will be released in stores on February 27, which is otherwise known as Pokemon Day.) This release will likely eventually merit the release of Charmander, Squirtle, and Eevee figures as well. But, that part is just educated speculation.

I’m incredibly happy with the quality and time put into the A Day With Pikachu line. I can’t wait to see what the future months’ line-up will be, and I can assure you, as a Funko and Pokemon fan, that these will be among my most cherished Funko products for years to come.

As for this “Lucky” little fig, this is one of the highest quality lines that Funko has produced in a while, well worth the price (and then some), with attention to detail and clever easter eggs for hardcore fans as well.

Disclosure: The Pokemon Company sent SuperParent a One Lucky Day figure to review.