SuperParenting: How to Talk to Your Kids About YouTube 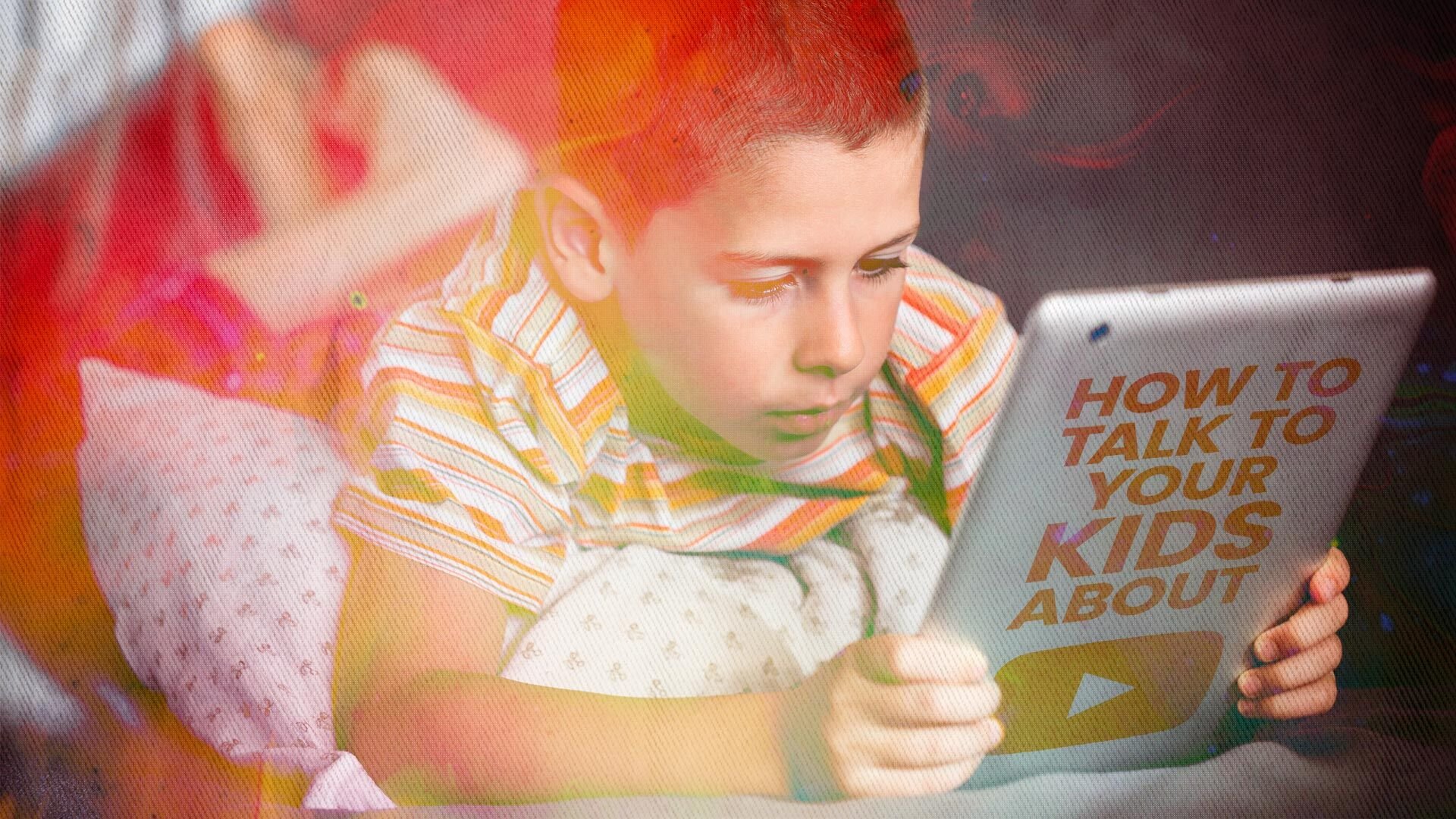 YouTube influences are everywhere. We see it in the way that our kids talk, in how they react to one another, and in the media that they talk about. It used to be cartoons and afterschool specials, like ABC's TGIF (ah, the '90s). These days, it's Poppy and the brothers Paul.

But even the most well-meaning parents can lose sight of the content that their kids are consuming. Even if you, like me, put a hard stop on YouTube consumption for the vast majority of your kids, they'll find access elsewhere. The trick isn't blacklisting YouTube -- it's talking about why it's an inappropriate place for kids. Yes, even YouTube Kids.

First things first: you need a base-level of YouTube understanding

Base knowledge of YouTube goes beyond understanding parental controls (because one day they'll be on a device that doesn't have those limits) and how to use it. Instead, that knowledge needs to be rooted in YouTube culture and how viewing algorithms affect what people watch.

If you begin with culture, your first stop should be reading, reading, and more reading. Google who your kids are watching to gain a better understanding of who they are. Watch a few of their videos. See what the community is like. If you're short on time, you can shortcut some of it by reading what the media has to say about YouTube. Julia Alexander has made reporting on YouTube her niche, as has Taylor Lorenz. Their work is important investigative journalism that puts a mirror up to who these YouTube stars are and why they're so popular, in addition to why their work on YouTube should be closely examined.

Another pillar of understanding is in how video recommendations work. What tends to keep audiences, especially younger audiences, engaged for long periods of time are the "recommended" and "next up" videos. And this, my dear SuperParents, is part of why letting your children watch YouTube unsupervised, even on YouTube Kids, is never a good idea. There have been a number of instances over the last several years of inappropriate content making its way through the supposed "kid-safe" controls on YouTube Kids, including violence, disturbing representations of popular children's characters, and outright unsettling videos that have no place on a child-friendly platform. Even Elsa isn't safe.

If you've written these issues off as a lot of media hullabaloo and overblown parental reactions, do yourself a favor and take another look.

While the internet may have lost its neutrality in the United States, thanks to a controversial vote in 2017, it has mostly maintained its independence from government regulation. Unlike television, which is regulated by governing media bodies like the FCC and the CRTC (in Canada), YouTube and its creators aren't subject to the same scrutiny that mainstream television is. If a YouTuber makes a video that they say is for kids, but clearly isn't (like with the videos we mentioned previously), the worst that can happen is that their account is shut down.

If a television station doesn't adhere to the standards set by the FCC, they face hefty fines. There are stringent rules around children's programming, especially in the U.S., that require producers and studios to tightly control what they're presenting on their platforms.

YouTube, on the other hand, is a social platform, where anyone can make a video, share it, and market it how they please. The consequences are minimal for the creators, but can be anything from benignly jarring to nightmare inducing for the children watching their videos. SuperParent doesn't advocate for censorship or government regulation on YouTube (beyond a commitment to delist and de-monetize videos that promote hate speech), but we do want parents to be more aware that if you don't curate the content your kids watch, YouTube will.

And that's not something that you want.

As your children use YouTube Kids, as one hopes you're not letting them on YouTube without any filtering, they can tap around and find new, interesting videos related to the ones they're already watching. Or, in some cases, videos that YouTube thinks that they might like based on what they've already been watching.

At the heart of any technological platform are the algorithms (the code and equations) that make them run. YouTube's algorithms are a powerful reminder of when we let artificial intelligence (even when they use something as complex and interesting as machine learning) take over content curation, they're going to get it wrong. Or, they'll get it so right that your kids are going to fall into a neverending YouTube hole and find themselves on the pathway to digital addiction.

The Atlantic wrote an excellent investigative piece into how YouTube's algorithms affect toddlers, specifically. And, if you're curious about how the bits work, Towards Data Science has a great breakdown (but it's highly technical).

Now that you have the knowledge, it's time to talk

As with any habit or piece of knowledge that you're looking to impart, it's better to do so when your kids are young. So, we're going to break this conversation down into two age groups: children and teenagers.

This is the best age to chat with your kiddos about anything technology related. Part of having a healthy relationship with technology is established by the conversations that we have together. With younger children, it's always better to lead with the positives and firm (but kind) boundaries. Frame the discussion as a way for them to still feel like they have some measure of control over the digital content that they're consuming, without giving them all of the control they crave. This is the age to teach them, in small pockets, what kinds of content are appropriate for them. It isn't about their age, mind you. It's about maturity and cognitive development.

For example, my youngest daughter (she's 6) came and talked to me about what she was watching on Netflix. She was unsure of how appropriate it was, because her brother said it really creeped him out. So, we sat down together and we watched part of an episode together. We talked about what we were watching, why she liked it, and then we looked into some reviews. It's not a show I would recommend other kids her age watch, but she's kind of a creepy little kid (her own words) and loves kid-friendly horror in a big way. She recognized that while her brother, who doesn't like horror at all, doesn't agree or approve, it was appropriate for her maturity.

Talking to your kids about content in the same thoughtful capacity, even if you don't understand the appeal of it, is important to getting them to trust you. It provides an authoritative backdrop for you to ask questions about why your child likes watching Jacksepticeye or Markiplier. If your child has been watching YouTubers who practice toxicity in their channels (trolling, hate speech, and the like), now's the time to nip that in the bud.

It's all about communicating to their age level. If your 7-year-old is watching a channel that is clearly not intended for them or their maturity, approach them with analogies that they'll understand. Schools talk to kids about bullying on the playground. Liken online bullying to what happens in their lives outside the internet. By making the connection, your kids will be able to say no to bullies online, just like they do in the real world.

I'm not going to sugarcoat this for you: welcome to an uphill battle that may yield little to no results. Teenagers are notoriously entrenched in YouTube culture. A lot of it is benign. My eldest loves music videos created by other teenagers. She'll watch beauty tutorials -- videos that teach her different ways to do her hair or makeup -- and indulge in the odd viral video, but only if she finds it wholesome. Thankfully, these content choices are because that's what she (and her closest friends) enjoys watching.

But it's the content that treads the line between the seemingly benign and the deeply toxic that we need to be concerned about. No, this isn't a new kind of moral panic. But as parents of teenagers, we need to be a little more aware. And we certainly can't shrug it off as "kids will be kids."

Strike up a conversation with your teen about what they're watching. They'll likely be sullen and silent. They might be flippant and dismissive. But, since you've done your homework, you've got a firm grasp on the subject matter. Probe them with questions about the latest PewDiePie video (as long as you're comfortable) and what they thought about it. Talk about your thoughts and invite a lively discussion. You may find that you and your teen may be closer together on your viewpoints than you'd have originally imagined. It could be that you're miles apart.

The best thing to do is cultivate curiosity and encourage them to question everything they consume. It might not get through to them, but you'll have done your best. If you find yourself in a worst-case scenario, where your child might be spending time in places like 4Chan as a result of watching YouTube videos, you'll need to figure out where your lines are. Only you know what's right for you and your teen, after all.

The internet is constantly changing and adapting to widespread cultural change. 10 years ago, social media was barely a thing. These days, it's ubiquitous. SnapChat, Instagram, Kik, TikTok, and even WhatsApp weren't around when we were kids. But that doesn't mean that we can stop learning and lose sight of our kids, just because the world is so much different now than it was when we were young.

Keep inviting conversation with your kids and keep encouraging critical curiosity. With the little kids, talk to them before and after they watch videos about what they were watching. With teens, check in on a semi-regular basis to make sure that you're apprised of what they're consuming. Listen for new language or speech patterns, since that'll indicate what they're watching. Teens can't help but parrot what they're exposed to on a regular basis. If you're hearing increasingly toxic patterns, keep talking.

Our kids are worth the discomfort.

This is part of a new SuperParent series "SuperParenting." We want to help you talk about screen time with your kids to define some trickier topics (like grooming and phishing). We want to make sure you know how to set up parental controls (including the new ones for Windows 10 and Xbox One) on all major platforms, including YouTube. And we want to make sure you talk to your kids about the best ways to establish healthy relationships with technology.