Fireball Island: The Curse of Vul-Kar: A SuperParent Tabletop Review 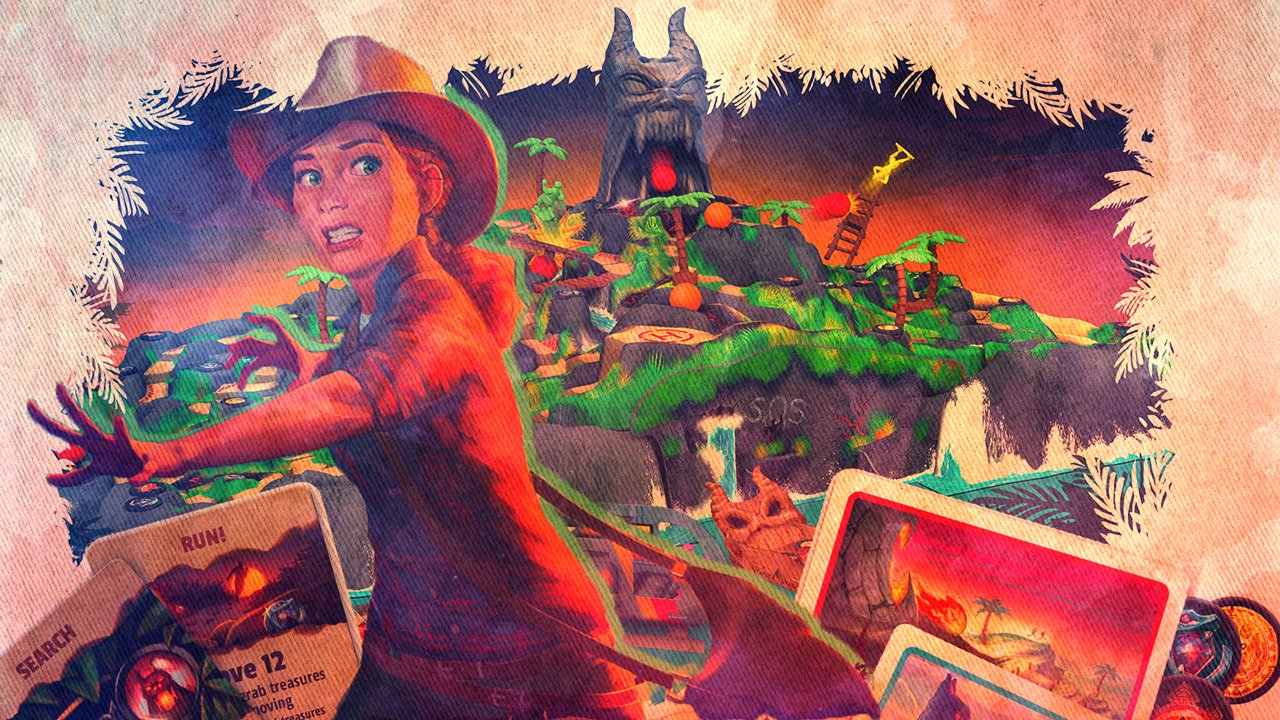 Bold, plastic explorers hiking up treacherous trails. Fireballs that plummet down slopes, knocking you off course. Rickety bridges, swarms of killer bees, a boulder, snakes...and yes, a leaping tiger that will jump at you. These are the ingredients for an awesome adventure and a truly over-the-top board game. Welcome to Fireball Island: The Curse of Vul-Kar.

The Olde -- I mean astute -- board gamers out there might remember the name “Fireball Island.” Back in 1986, Milton Bradley released this ambitious three-dimensional board game aimed squarely at fans of Indiana Jones. It was a raised plastic topographical map-in-a-box where players had to race around the island, grab a precious gem, and get off while attempting to screw over their fellow explorers. That game, which sold for about 16 bucks in the 80s (about $36 today), became a white whale for collectors. Just check eBay.

Along came Restoration Games’ Kickstarter campaign, which rebooted Fireball Island with expansions and deeper levels of gameplay that add a whole lot more to the playfield. Maybe that’s why the game costs $75. Before you fully spit-take from sticker shock, let’s start with a tour of the island, shall we?

Just how big is this thing, anyhow?

Measuring the length of the island, the assembled board is about 27 x 17 x 5 inches (add another 5 inches when you drop Vul-Kar atop the island). That’s not accounting for the game progress trackers, decks of cards -- and yes, the expansions that really do add to the experience. Clear off a table because you’re going to need room to play. Think of how someone would maneuver around a pool table to find the best angle to sink a shot. Same thought process applies here, but you’ll be launching fireballs trying to knock off your fellow explorers.

So how does this work as a 3D board game?

Inside the box are three large, overlapping plastic molds that make up the game board. Assembled, it’s big and way more ambitious in size and scope than the original game. Some might even think that the game seems a little “cheap” in that you have this plastic board broken up into three pieces that require assembly each time you play. It also means that it requires a bit of TLC in storage and setup. But in comparison to the original, the playfied is HUGE with many branching paths to explore, height, and details to appreciate.

Once you have the island formed, you’re placing trees that can alter the fireball paths, rickety bridges, ladders, and fiery marbles that perch at different locations around the island. Being careful not to bump anything, you’re tasked with grabbing treasures, taking photos, and not triggering a volcanic apocalypse in the process.

How do you play it?

A play session can go as quickly as 30 minutes depending upon the luck of the draw and your choices along the way. Which paths will you take around the island? Will you go for treasure tokens or aim for the photo ops? Will you race for the jewel of Vul-Kar or will you plan to swipe it from another player? And you have to balance all this while mentally preparing to bolt back to the helipad to escape.

A deck of action cards determine everything from player movement to island hazards while “souvenir” cards provide power-up bonuses that can quickly flip the game’s outcome.

The real fun, though, comes from you strategically trying to line up shots to flick and launch marbles at the other players.

Are the expansions worth it?

There are three game-expanding boxes for Fireball Island -- and each adds a couple unique twists to the overall experience. The most obvious is the Wreck of the Crimson Cutlass, a booby-trapped pirate ship expansion that is a separate board played with the main game. And that measures an additional 11 x 11 inches. Sorry, you’ll need to find someplace else for the bowl of chips during expanded sessions.

There’s The Last Adventurer expansion that adds a fifth player, the threat of snake attacks on the island (courtesy of green marbles) and an oh-so-cute foam bolder that could flatten players as they flee from caves.

The clear favorite, though, is the Crouching Tiger, Hidden Bees expansion. Besides the pun-tastic glory here, it adds a swarm of angry bees (yellow marbles) that’ll plague the island and a little plastic tiger that you literally place around the table and strategically pop it to make it pounce on players to take them out.

Really, the game is ridiculous and fun. A throwback to the original’s unique premise with more than enough added to make it stand apart in just about every way.

Whether you’re playing with a 7-year-old or several 40-year-olds, this game is a blast. I should know, over the past few days, I’ve tested this with both. As I was rattling off rules to my child, he broke at one point to say, “wow, there’s a lot going on here.” He’s not wrong, but it is totally manageable.

Truth is, though, it’s a game that most everyone will love -- and is potentially awesome for parties -- but not everyone can afford. It could be partly because this is a far more ambitious outing than the original. It could be that this didn’t have the weight of a company like Milton Bradley behind it, so they weren’t able to produce the game at scale.