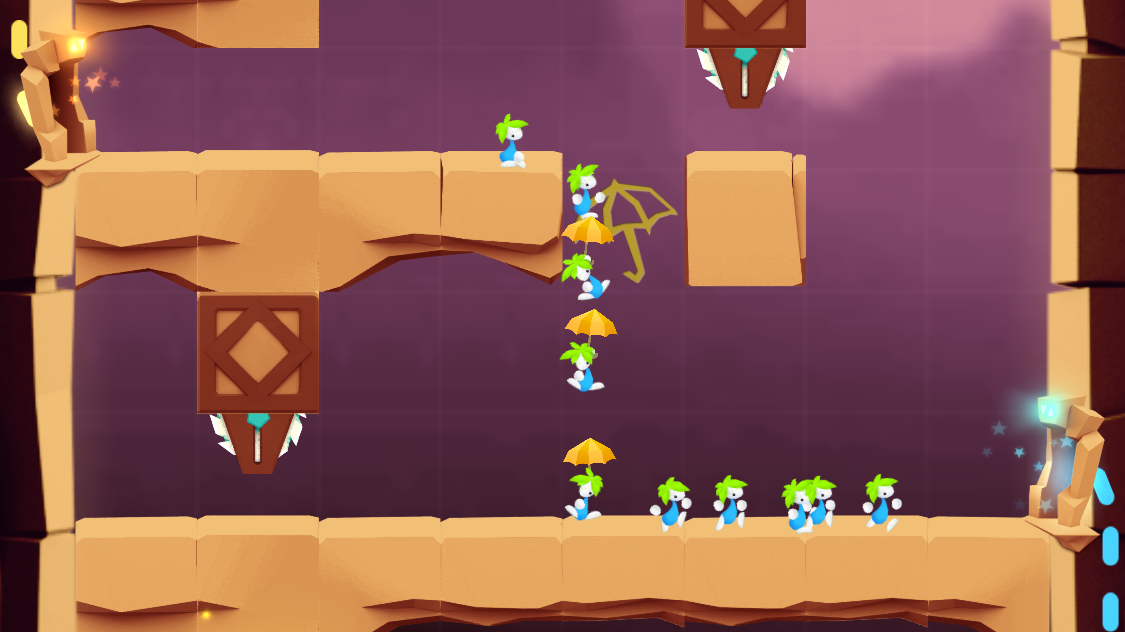 Lemmings is a free-to-play mobile game in the popular Lemmings franchise, which began with the original Lemmings in 1991 (see the original in action below). The puzzle game challenges players to safely guide green-haired critters called Lemmings (not to be confused with the real-world rodent) to an exit in each stage.

In each level, the Lemmings will automatically enter the stage through a door somewhere on the screen, and players must evaluate the environment to determine how to safely guide them to the exit using the tools they have on hand, like shovels and blocks.

Once Lemmings enter the stage, they will walk forward automatically until they interact with an object in the environment. This means they’ll willingly walk off of cliffs and into hazards in their path, killing themselves unless players use the proper tools to direct them to safety. For instance, players may need to command a Lemming to become a block, which causes the other Lemmings to turn around and walk in the other direction. Users can also protect Lemmings from a high fall by placing an umbrella in the path, and have Lemmings build staircases and dig through the earth to move through each stage successfully.

Players need to guide a minimum number of Lemmings to the exit to successfully complete each stage. If they lose too many Lemmings to hazards, they can replay the level and try again. While some Lemmings may perish along the way, each critter is quite tiny, and there’s no realistic violence or gore to worry about.

Like classic Lemmings titles, this mobile version is a great tool for strengthening players’ critical thinking, problem-solving, and forward thinking skills. Users need to think fast in each stage to determine a safe path for the Lemmings to take, and then trigger the proper actions before the Lemmings have gone too far.

In between stages, players can spend the Lemmings they’ve rescued to restore a variety of planets that the Lemmings can live on. Once players have restored a few planets, they'll unlock the ability to compete in tournaments against other players in a Tournament Mode.

As a free-to-play mobile game, Lemmings limits the amount of time users can play in a single sitting via an energy system. Players spend one point of energy each time they perform an action in a stage, like placing a block or an umbrella. Energy recharges automatically over time, or users can spend premium currency on an instant refill.

Lemmings is available to download for free on iOS and Android devices. The game is rated T for teen.

Check out the first eight minutes of Lemmings in our SuperParent First Look below to see this game in action.