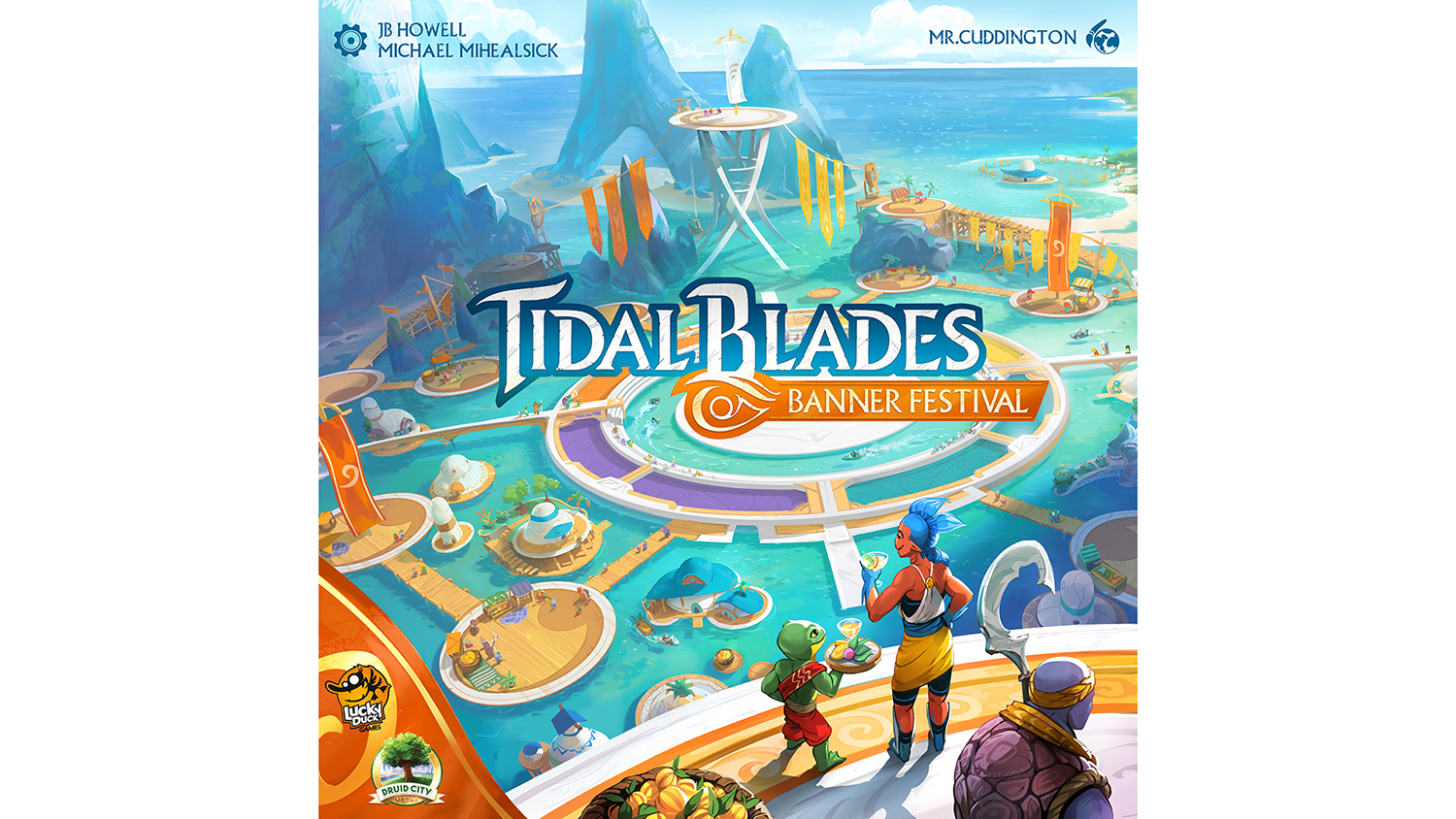 We had the chance to check out Tidal Blades: Banner Festival.

Designed by JB Howell and Michael Mihealsick, Tidal Blades: Banner Festival is a tabletop game for 2-5 players with a recommended age of 8+. The game takes players to the world of the Navirians, and allows them to become merchants with the goal of earning as much money as they can during the Banner Festival.

Each game of Tidal Blades: Banner Festival has an expected play time of 30-45 minutes.

Tidal Blades: Banner Festival takes place across three rounds, and each round consists of multiple “Bouts,” or hands.

After players have played their Merchandise Cards, each player will take an action depending on the value of the card they played.

The player who played the least valuable card will be able to perform the action written on the bottom of the Merchandise Card they played.

Finally, the player(s) who played cards that had a value in the middle will be able to place one of their banners on the game board.

While players can take different actions during each Bout, all of these actions are designed to help players earn money at the end of the round and overall game. Players can use strategic thinking to decide which card they want to play during each Bout, depending on the action they’d like to take.

That being said, the gameplay has a bit of luck involved, since players won’t know which cards their opponents are going to play during a Bout, so they may not be able to perform the action they wanted to.

It’s worth pointing out that the game features a few rule changes depending on the number of players. For instance, in a 2-3 player game, players will need to play at least one “dummy” card from the deck during each Bout so that there are always four cards to compare.

Is this game fun to play? What’s the verdict?

Tidal Blades: Banner Festival isn’t a bad game, but we also weren’t blown away by it. The gameplay is fairly simple, though there are lots of factors to keep track of during each Bout and round, and it may take a few Bouts for players to become familiar with all of the rules.

For the record, we only tested the game with two players, which meant we had to play two “dummy” cards during each Bout to have enough cards to compare with our own. We imagine the game may be more fun with additional players, since it may encourage players to think more strategically, but we can’t guarantee that would be the case.

If you’re on the fence about picking up Tidal Blades: Banner Festival, you can download the game’s full rulebook from the Lucky Duck Games website to see if it’s something your family would be interested in.

Tidal Blades: Banner Festival is now available for $40 on the Lucky Duck Games website and at other retailers.