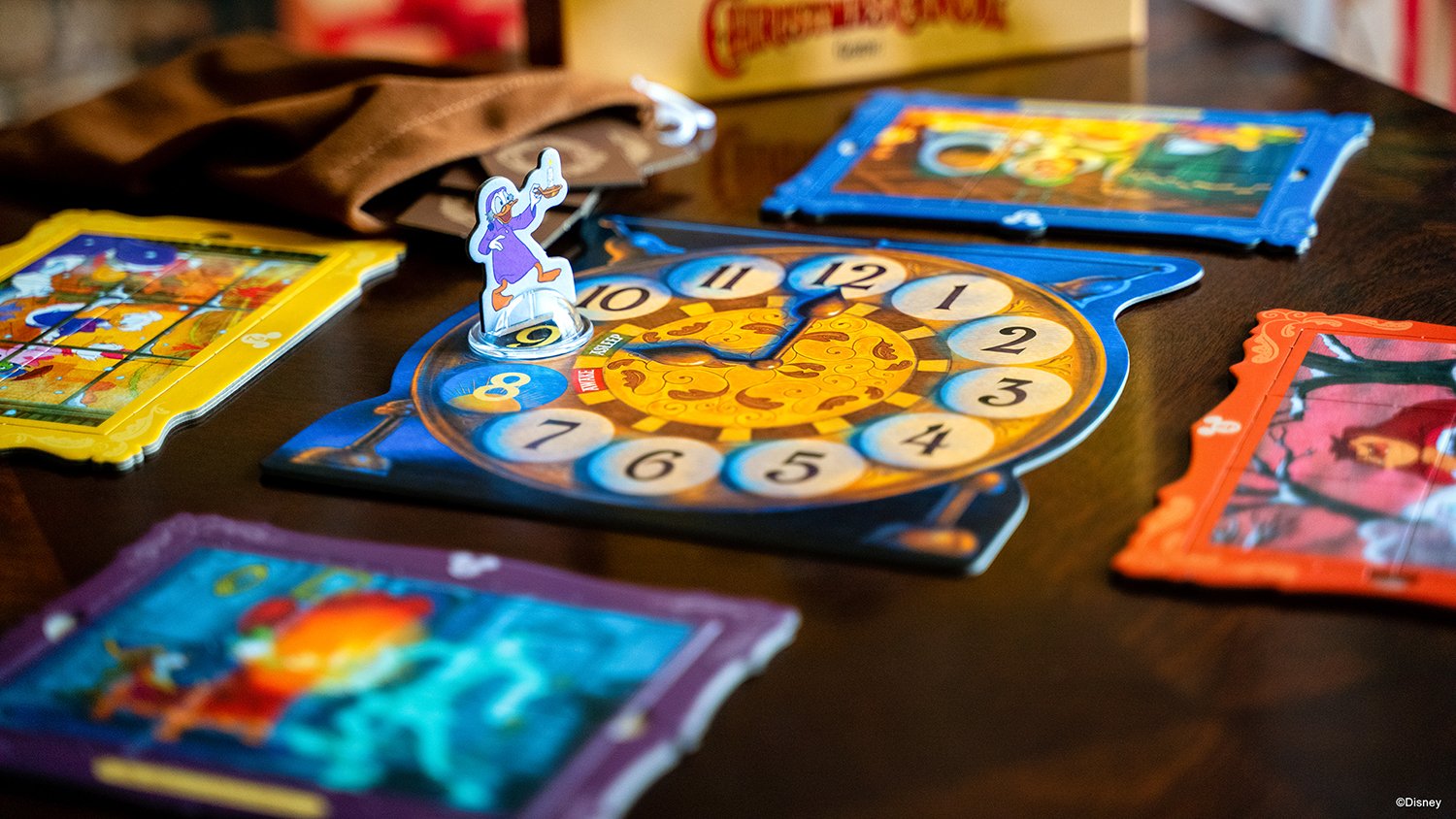 Funko Games recently released the Disney Mickey’s Christmas Carol Game. We had the chance to check it out.

The cooperative game challenges players to work together to recreate scenes from the film before Scrooge wages up.

The Disney Mickey’s Christmas Carol Game has an expected play time of 20 minutes.

The Disney Mickey’s Christmas Carol Game comes with six jigsaw puzzles, each representing a different scene from the film, such as Scrooge’s conversation with Jacob Marley and Scrooge’s visit with the Ghost of Christmas Present. Players will be challenged to assemble the puzzles in chronological order (that is, in the same order the scenes take place in the film) before Scrooge wakes up in order to win the game.

Scrooge himself is placed on a clock game board in the center of the play area, and he’ll move clockwise or counter-clockwise around the clock face as puzzles are completed and/or Special Tiles are revealed.

The square puzzle tiles and Special Tiles are shuffled inside a cloth bag. On each turn, the active player can draw up to five tiles from the bag. If players draw only puzzle tiles, they can choose two tiles to play to their matching puzzles and return any remaining tiles to the cloth bag. If players draw a Special Tile, they’ll follow the instructions on the tile, which will determine how many pieces are played to the puzzles and whether or not Scrooge moves around the clock face.

Disney Mickey’s Christmas Carol Game is more focused on “the luck of the draw” than on strategy and skill. That is, while players are challenged to complete the game’s puzzle scenes in chronological order, they may be forced to complete puzzles out of order based on the tiles they pull from the bag. If a puzzle is completed in the wrong order, Scrooge will move clockwise around the clock face and will get closer to waking up.

Disney Mickey’s Christmas Carol Game is a cute and simple game that’s easy to learn and teach to new players. We enjoyed looking at the beautiful artwork from the film as we put the jigsaw puzzles together, but we wish the game focused a bit more on strategy, rather than luck. That is, it feels like the game’s outcome is out of your control, since you’ll never know which tiles you’ll pull from the bag and you ultimately have little influence over how things progress.

That being said, this focus on luck rather than strategy makes the game more approachable for younger players, and we can see the game being fun for families with young children.

Parents should know that while Disney Mickey's Christmas Carol Game includes six jigsaw puzzles, groups are encouraged to play their first game with only four. Once players are comfortable with the game's rules, they have the option to add the other two puzzles to the mix to increase the game's difficulty.

In addition, parents should know the puzzle pieces fit together very tightly on each puzzle board. This makes the puzzles easy to store when the game is over, but we can see younger players having trouble “forcing” the pieces to fit together while playing.

Finally, we wish the cloth bag were larger so that it would be easier to “shuffle” the tiles that are placed inside. As it is, we had to manually shuffle the tiles inside the bag with our hand before playing.

Disney Mickey’s Christmas Carol Game is a cute tabletop game for young children and families, but some players may not appreciate the game’s focus on luck, rather than skill.