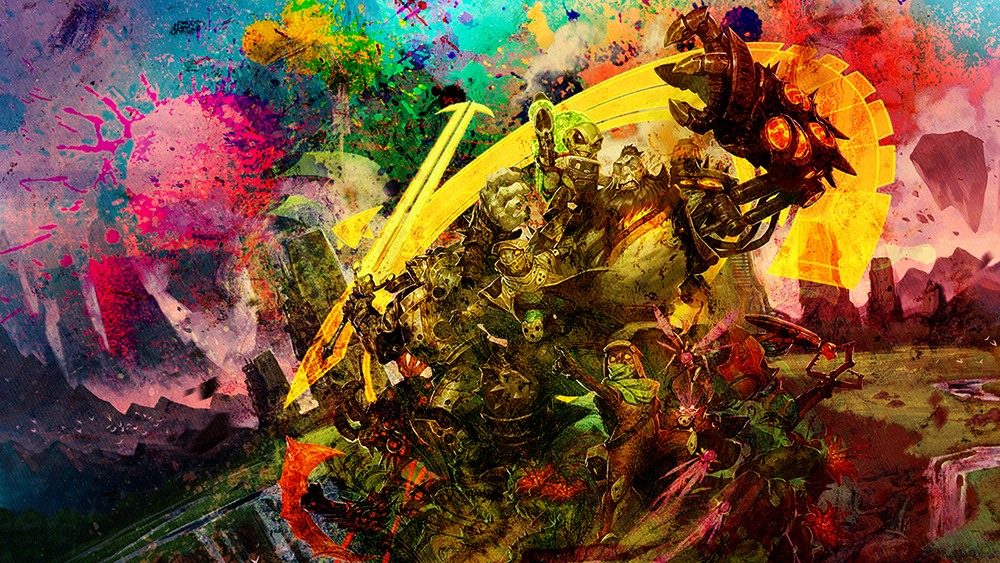 While you may not know Richard Garfield’s name, if you play tabletop games, you’ve likely heard of his most famous creation, Magic: The Gathering. His latest, KeyForge (published by Fantasy Flight Games), is a new twist on collectible card games that throws out one of the genre’s core principles, deck building, paving the way for something truly special.

The cost of entry is low, with a two-player starter including two standardized learning decks and two blind decks (more on this in a bit) priced at $39.95. Additional decks are $9.95. Further, if you are a seasoned collectible card game player and don’t mind substituting components you already have, you can even skip the starter kit (though it’s a nice package for on-boarding new players).

What is a collectible card game?

Collectible card games have been popular since Magic: The Gathering launched in 1993. Most games feature a similar format. Starter decks are available to teach the game, with booster packs the main target for established players, as they fast-track creating unique decks to play against friends.

Deck building is often the most challenging part of getting into card games. There’s a financial barrier, because even the most enjoyable starter decks need improvement through booster pack purchases. There’s an enormous learning curve, too. You need to learn enough about the available cards to even begin to understand how to make them work best in concert.

How is KeyForge different than other CCGs?

KeyForge removes all of the deck building in an attempt to get players to the table quickly. It’s one of Fantasy Flight’s first two “Unique” games. The new genre is designed to give players an individualized experience through algorithmic packaging. In other words, the card assortment isn’t truly random. Rather a complex computer program helps identify cards that might be interesting (or at least not disastrous) when placed in the same deck.

For KeyForge, that means each deck is unique, down to its card backs and the bespoke named “archon” card that serves to tie everything together. Each deck consists of 36 cards plus the archon card. There are seven houses in KeyForge’s launch set, and each deck includes three of these equally distributed with twelve cards each.

There are no booster packs. Decks aren’t even supposed to be disassembled. Each archon card also serves as a checklist, just in case you put your cards in protective sleeves and can’t see the unique card back.

While you could conceivably own every KeyForge card, you’ll never be able to (officially) tinker with the best combination. You open a deck and you play it as is. It’s something that made me bristle a bit when I first read about the idea, but I was intrigued. I’m glad I kept an open mind.

How does KeyForge work?

KeyForge is a blend of the Pokemon Trading Card Game and Magic: The Gathering. Players don’t have life points and can’t be knocked out of the game through brute force. Instead, the goal is to forge three keys (yes, the name is on the nose).

This is handled through collecting Aember (either through reaping it from the common pool or stealing it from your opponent). Your creature cards can either be used to fight your opponent’s minions or collect Aember. If you have six Aember at the start of your turn, you can forge a key. The first player to forge all three wins.

The strategy comes in at the start of each turn. You can only control one of your three houses at a time. Your turn starts by declaring which house you’ll want to activate for the turn. You’re then limited to only playing or using cards from that house during that turn, even if you have creatures from other houses on the board.

It’s not always the best choice to activate the house representing the most cards in your hand. Sometimes a single powerful card can turn the tide. And perhaps a light bulb just went off in your head. If some cards are so powerful that they can swing the game, won’t decks created by algorithm necessarily have power imbalance?

Yes. Some KeyForge decks are going to be stronger than others.

Because KeyForge decks are unique and, therefore, might have an assortment of more powerful cards than other decks, Garfield created the “chain” mechanic. Some cards give you a “chain” when played. These limit your maximum hand size for the rest of the game.

Normally, the end of your turn includes drawing up to a full hand of six cards. Once you start gaining chains, that number is reduced, limiting your options for each subsequent turn.

KeyForge will also be getting a companion app and website so players (and Fantasy Flight) can track their decks. This will likely aid balancing and algorithm tweaks moving forward.

Ultimately, this is a bigger concern for competitive play. If all you want to do is play casually, the power imbalance is less frustrating. The decks we’ve opened seem to have varying levels of obvious synergy, but that doesn’t necessarily correlate to fun at the table.

KeyForge’s most enticing feature is its extremely low barrier to entry. With two of the $10 blind decks included, the $40 starter is a smart place to start (plus, you’ll get damage, Aember, and chain tokens, as well as the low-friction learning decks).

My biggest question is whether Fantasy Flight can make a long-term go of KeyForge. That requires a healthy competitive scene and an engaged casual market working in concert (as the publisher has fostered for its Living Card Games and Star Wars Destiny). Ultimately, this rests on the algorithm that makes the decks. If players feel like victory becomes a matter of lucky draw on a $10 purchase, they’ll quickly abandon the game. If KeyForge manages to make competition more than the deck you happened to purchase, there’s enough sauce to keep this going.

If your kids can read and strategize, but don’t quite understand the complexities of building a deck, KeyForge is perfect. Our ten year old grasped it with no problem, and our seven year old (who avidly plays Pokemon Trading Card Game) is expressing interest in diving in with us. I suspect he’ll have no problem after his experience building his own Pokemon decks.

I’m loving what Fantasy Flight is doing with its Unique genre, including KeyForge. I’m excited to see where this game (and the format) go next.