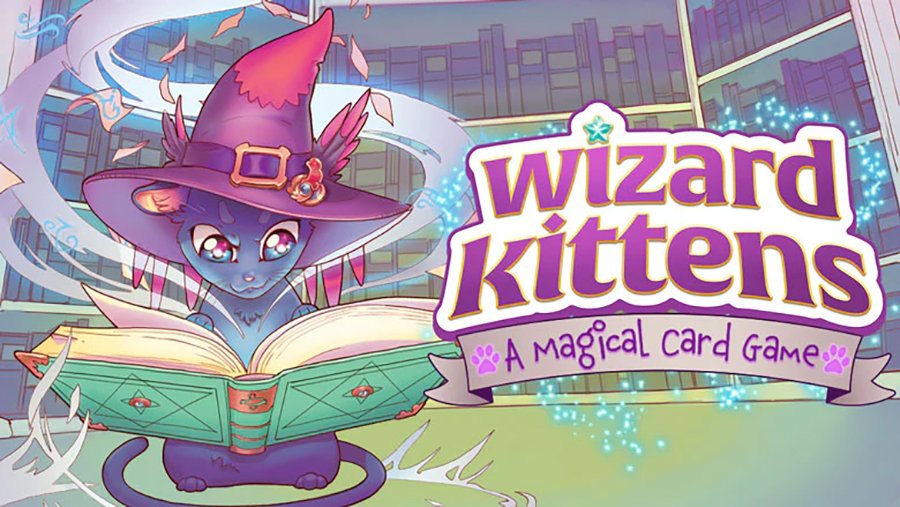 Wizard Kittens is a family-friendly tabletop game from Magpie Games. We recently had the chance to check it out.

Wizard Kittens is a “semi-cooperative” card game for 2-4 players with a recommended age of 7+.

In Wizard Kittens, a group of feline wizards has accidentally released curses from a magical book. Players will need to perform magical spells to return the curses to the book before Professor Whispurr arrives and finds out what has happened.

Each game of Wizard Kittens has an expected play time of 15-30 minutes.

The goal of Wizard Kittens is for the group to return six curses to the magical book before drawing the Professor Whispurr card from the game’s deck (when this card is drawn, the group has been “caught”). While this goal means the group is technically working together, each player will collect their own points, resulting in a single player winning the game at the end.

On each turn, the active player will draw a Ritual Component Card and place it next to one of the “Chapter” cards in their “Ritual Circle” area in front of them. Each “Chapter” is associated with a different Curse Card, so players will want to place these Ritual Components next to the Chapter Cards that will help them clear curses, if possible.

Players can use strategic thinking to decide which spell to cast on each turn. However, once players cast a spell, they can’t cast the same spell on their next turn. That is, there’s a one-turn “cooldown” for each spell, which will force players to experiment with different spells as the game progresses.

Finally, the game includes “Chaos Cat Cards” that can be randomly drawn from the Ritual Component deck. When one of these cards is drawn, a “New Rule” card is activated, and players must follow the instructions on this New Rule card.

If the group cleared the curses, the player who earned the most points wins. If the group was caught, every player with 10 or more points loses and all players with nine or fewer points will count the Ritual Component Cards they had in their Ritual Circle at the end of the game. The player with the least number of cards will win.

While these gameplay rules apply to a 3-4 player game of Wizard Kittens, the game also includes rules for a “2-player variant” version of the game. This variant eliminates some of the “New Rule” cards from play, among other changes.

Wizard Kittens has adorable artwork that instantly drew us to the game. However, we were disappointed by the actual gameplay experience. While the game’s turn order is fairly simple, the game has a complicated setup process and feels repetitive as a two-player experience.

That being said, we imagine the game would be more entertaining with 3-4 players, since more cards would be in play in Ritual Circles around the table, and each player would therefore have more cards to choose from when deciding which spell to cast on each turn. However, we can’t guarantee that, since we only played with two people.

As it stands, we can’t recommend Wizard Kittens if you know you’ll only ever play with two people.

Wizard Kittens requires a large gameplay area. We fit a two-player game on a standard card table, but larger groups will likely need to play on a larger surface.

Wizard Kittens is an adorable card game that unfortunately didn’t live up to our expectations. We appreciate the game’s focus on strategic thinking, but we were let down by the game as a two-player experience.

Wizard Kittens is available on the Magpie Games website and at other retailers for $19.99.