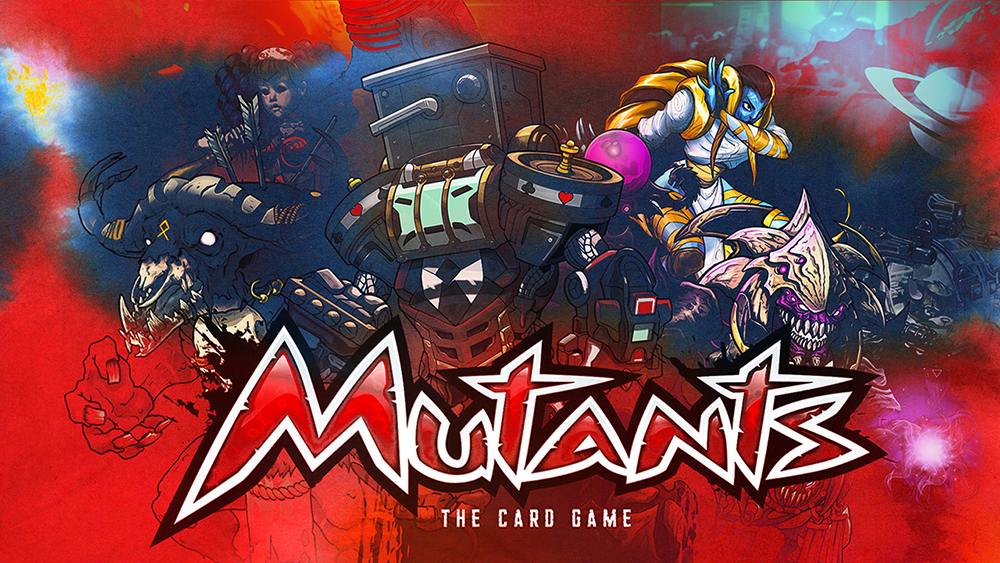 With so many tabletop games on shelves, it’s hard to know which might have the right combination of theme, strategy, and complexity for your family. Deck builders are often a great intro to more complex board games without a multitude of tokens and intense setup time.

Lucky Duck Games’ Mutants is the latest to put a new spin on the decade-old genre. It’s on Kickstarter now, and we’ve been playing a preview copy to see how it stacks up.

What is a deck building game?

In 2008, Rio Games published Donald X Vaccarino’s Dominion, launching a new genre of tabletop games. Deck builders start players with identical starting cards (often 10 to 12). In most of these, you play all your cards during your turn, purchase new cards from a common “market,” discard, and draw a new hand. When you can’t draw anymore cards, you shuffle your discard pile (including any cards you’ve purchased).

Over time, your deck grows significantly with strategic additions that complement other cards you’ve added during the game. Most of these rely on scoring victory points at the end to determine the winner.

Since the kingdom-themed game’s release, the “deck building” genre has exploded with both competitive and cooperative offerings, becoming a common landing pad for pop culture licenses, including Marvel super heroes, Harry Potter, Alien, and more.

Even with competition on the shelf from easily recognizable properties, there’s room for original offerings. Hero Realms, Clank! (and its science fiction spin-off Clank! In Space), and Ascension: Chronicle of the Godslayer are three that take the core premise and branch off in different directions.

Zombies, robots, demons, aliens, and more are at your disposal as you attempt to beat your opponents into submission.

Mutants is a competitive deck-builder for two to four players that takes place over five rounds. Players have identical starting decks of “basic mutants,” with unique sets of “advanced mutants” that they’ll be able to add to their arsenal throughout the game.

Unlike some deck builders, there’s a great deal of direct interaction between players in Mutants. Winning a round and scoring its victory points is based on a power tracker. As you climb the ladder, you’ll “dominate” other players and potentially knock them down.

Most mutants have two abilities: one that triggers when they come into play and another when they leave. Some have the ability to block attacks, while others have persistent effects.

You’ve only got three slots, though. So strategically rotating your mutants out when they are no longer useful or when you want to trigger their leave abilities fills each turn with interesting decisions. Mutants deviates from deck building norms in other interesting ways. You can only play one card per turn, purchasing from your advanced mutant “market” requires discarding multiple cards in your hand with matching genetic icons, and you’ll constantly be weighing decisions about whether a card is better off in your deck or in your “freeze” pile to count as victory points at the end of the game.

You start the game with a deck of 12, and that will only change slightly throughout. Every time you need to shuffle your discard pile, you need to permanently remove a card and send it to your “freeze” pile. In most deck builders, you want to churn through cards as quickly as possible. In Mutants, that can be a disaster, forcing you to remove a powerful card before you’re ready to lose it for good.

Lucky Duck Games has created something that deviates from the overcrowded deck building genre in interesting ways, but it’s not without its pitfalls.

How complex is Mutants?

All deck builders require reading and varying degrees of strategic understanding. It’s not enough to understand how a single card behaves, as the trick to victory is often seeing synergies amongst a variety of cards.

Mutants is one of the more challenging deck builders to wrap your head around. There are fundamental rules that differ from the rest of the genre enough that pros will need to forget what they know from games like Dominion and Ascension.

However, once you start to understand the flow and turn order, things start to move quickly. Each deck has a turn-order card with common iconography on the other side for easy reference. Our 10-year-old had no problems keeping up after the first round.

How many players should I have at the table for Mutants?

Based on our time with the game, we’d recommend steering away from Mutants if you only have two players. One key mechanic that inspires player interaction doesn’t work terribly well with only two. Likewise, each round was a blowout, because it’s hard to recover once you’re being dominated by the other player.

Mutants shines with three or four players, though. The power ladder was constantly in flux each round. Interactions among players were more meaningful, and strategies were far more interesting.

Deck builders often lead to extensive turn planning. Most of the thinking is done while everyone else is playing their cards, such that you can roll out your strategy as soon as your turn comes around. With four players, Mutants kept us on our toes. We often had to quickly adjust plans due to our mutants getting knocked out, which in turn disrupted planned combos.

At higher player counts, Mutants inspires a healthy combination of forethought and reactive play that sets it far apart from other games in the genre. For two players, the game doesn’t get a chance to show off its best features.

Mutants comes at a time when players already have a lot of choice in deck building games. Lucky Duck was wise to tear the genre down to its foundation and rebuild it as something completely new (not unlike the titular mutants).

If you’re looking for something with great art, moderate strategy, and interesting player interactions (without sheets of cardboard chits to punch out and manage), Mutants is a great game for your table. Just make sure you have three or four players (pre-teen and older) to battle it out with.

We had a blast pitting our motley crew of demons, aliens, zombies, warriors, and robots against one another. It was a fight all the way through, with victory anyone’s to take until we tallied points at the end. For me, satisfaction comes from watching interesting strategy unfold at the table, close victories, and clever player interactions. Mutants delivers on all of these… if you’ve got more than two players at the table.

A Look At The Cards